A welcoming team lays the foundation for success.

03 Jun A welcoming team lays the foundation for success.

Two weeks done and it’s going by so fast.

This past week was Memorial Day weekend so Yosemite was packed to the brim with people. We opted to stay out of Yosemite Valley and instead, do some hiking on the edge of the park. Even though the area we were in was considered relatively low elevation for Yosemite, 5,000 ft is pretty high up for me! We hiked to Cascade Falls and were able to see it from a vantage point pretty different than what you typically see. We finished off our hiking by heading to Tuolumne Grove to check out one of the giant sequoia groves in the area. In all, a day of hiking around 11 miles! 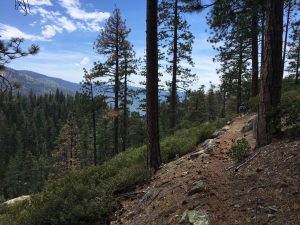 The rest of the week was spent doing park-wide orientation for all employees, interns, and volunteers for the season. Right from the beginning, I could tell that I was going to be a part of a big family that would look out for each other and include everyone’s interests. Throughout orientation, we learned about the different divisions, attractions, wilderness safety, and expectations. To end the park-wide orientation, we got to take the Green Dragon around the park, which is an open-air tram that allows you to see the gorgeous rock faces of the valley in clear view. 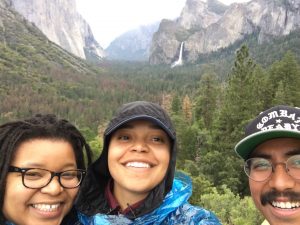 Jamila, Giovanni, and I taking a quick selfie during our Green Dragon tour around the park.

Following park-wide orientation was my crew’s orientation for Aquatics team for the summer season. Once again, I felt included and welcomed immediately. This is essential for success this summer and I’m already off to a good start. We learned about the natural history and biology of the species we will be focusing on, wilderness ethics, conduct, and intern expectations. Friday, we went into the park to watch a demonstration on collecting eDNA samples and ended it with a training hike up Vernal Falls, Nevada Falls, and coming back down the John Muir Trail. An intense shorter hike with lots of mist, stairs, and great views. 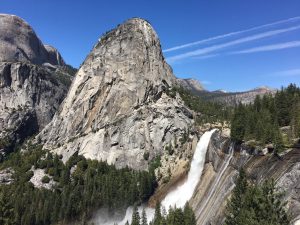 With two weeks under my belt, I have already learned so much and am excited to learn even more this summer. I still can’t believe I’m working at Yosemite National Park! This is a dream that I’ve always had, and everyday, I wake up excited for what’s to come.