As its name suggests, Lava Beds National Monument is known for its geologic formations built by volcanic eruptions especially its vast networks of caves. Caves draw in a huge number of visitors that seek to explore their twists and turns. So far, I’ve been to three caves at Lava Beds and can attest to the adventures you can find by exploring them! 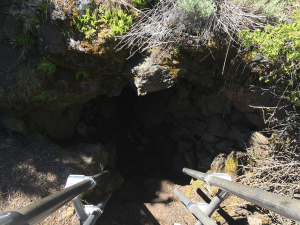 Stairs down to the entrance to Lava Brook Cave

Although most visitors are interested in the geology of the caves, they are often anxious about the bats that reside in them. A lot of this anxiety about bats can be traced to common misconceptions that give the creatures a bad reputation. The image of the blood-sucking bat is all over popular media like movies and TV shows. So this week, I’ve been working on an interpretative program for park visitors that will clarify some of these misconceptions. By developing this program, I’ve dispelled my own preconceptions about bats and discovered that bats are misunderstood yet remarkable creatures! Echolocation is only one of their many superpowers. Some bats are also immune to scorpion stings.

Recording of a bat echolocation call

As part of my program, I will demonstrate a new software that monitors bat echolocations in real time. Visitors will be able to “see” bats through their calls and experience them in a non-harmful or overwhelming way. The first time I tried out the software we found a hairy winged myotis, which is only about 3 inches in length and 10 grams in weight. Most of the bats I’ve seen back home are larger fruit bats distinguishable by their audible calls. So I was so amazed that through this form of acoustic monitoring, we’re able to identify bats we can’t see or hear! Although I have to wear a 4-foot-tall microphone while monitoring, I am excited to look foolish in the name of science.