Got to help save a bird! 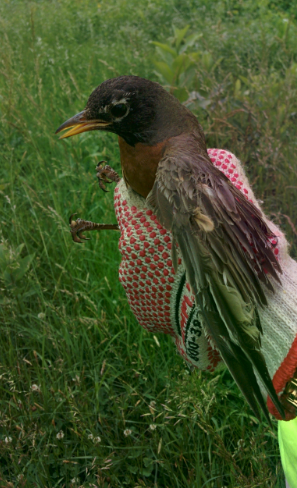 This week as we were out cray-fishing we received a call from our supervisor telling us a park ranger had found an injured robin. We quickly gathered some gloves, pair of cutters, and a cage and headed over to where the robin was found. When we got there she was hobbling in the grass with a white string dangling behind. When a fellow intern picked it up, we saw that the string was wound pretty tightly in her wing resulting in a cut. We started cutting off pieces of the string and gently began removing it. Luckily, she was able to move her wing but since she had a bleeding wound, we took her to a local sanctuary. They told us to check on the robin next week to hopefully bring it back to Valley Forge.

On another note, we had crayfish core today and I was leading a group of volunteers that were a family with two kids. The kids were really energetic and loved learning. They instantly began asking many insightful questions and began making observations out loud. As the biotech here in Valley Forge debriefed everyone on the importance of flipping back some of the rocks to not disturb the environment, he pulled out an invasive weed nearby and the kid looked up to him and said, “Didn’t you just kill that plant?” This is why I enjoy working with kids. I enjoy hearing the questions and comments they blurt out and despite being young, older folks can still learn from them.