It’s not easy being green

03 Jun It’s not easy being green 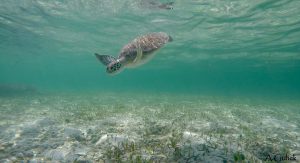 Seagrass ecosystems are incredibly important foundational ecosystems that provide a variety of ecological and economic services. These ecosystems, and the animals that rely upon them, have been threatened and disrupted by rapid declines and degradation in seagrasses worldwide. Much of the loss can be linked to anthropogenic stressors. Green turtles are the only herbivorous sea turtle species and are the primary consumers of seagrasses worldwide. Green turtle populations have been severely overharvested by humans over the last 200 years and are currently listed as a threatened/endangered species. However, populations are beginning to increase in some areas as a result of long-term conservation efforts. Given the rapid decline in seagrass coverage globally, there is growing concern that the altered ecosystems of today may not be able to sustain grazing by green turtle populations as they did two centuries ago. When an endangered species recovers, what ecological role does it fulfill if its ecosystem has been altered by anthropogenic activities? This is only one of many questions being asked by my mentor, Alexandra Gulick (Graduate Student, Archie Carr Center for Sea Turtle Research, University of Florida). To begin to answer this prodigious question, she must start by investigating the fundamental factors that drive this plant-herbivore interaction. I’m here to help Alexandra execute two of her ecological objectives.

Accomplishing said objectives will then allow her to model the carrying capacity of Caribbean seagrass pastures for recovering green turtle populations.

Buck Island Reef National Monument (BUIS) was established in 1961 under President John F. Kennedy and was later expanded in 2001 under President Bill Clinton. It was the first fully marine protected area in the National Park Service system. The monument includes Buck Island (176 acres) and 18,839 acres of submerged land and coral reef systems. Buck Island is an uninhabited island 1½ miles off the northern coast of St. Croix, and is surrounded by a barrier reef and large expanses of seagrass meadows. Conducting this research at BUIS offers a unique opportunity to study green turtle grazing dynamics and habitat use. Fortunately, the seagrass ecosystem supports both juvenile and adult turtles throughout the year which is uncommon. Also, over the last decade NPS resource managers have documented increases in green turtle nesting and foraging populations. When combined, these factors make BUIS more than ideal for studying green turtle and seagrass interactions. I am thrilled to be a part of this research and partake in sharing it with the world.