“Young people and their phones, ugh!”

“Excuse me, can you take a photo of us?”

“Where is the closest wifi?”

These are some of the things my family and I heard while walking around the more touristy areas of Yosemite National Park. For my internship, I don’t spend too much time in the Valley, where about 95% of visitors to the park hang out. I wanted to see more of the views that you typically see in photos of Yosemite, and it would give us some time to do some shorter day hikes, since my family isn’t a big camping or backpacking family for backcountry trails. 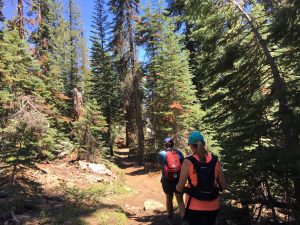 My mother and I hiking Sentinel Dome Trail

As we passed and interacted with other park visitors, we saw people in flip flops, jeans, single use plastic water bottles, sodas, and everything else in between that you wouldn’t expect to see while hiking. Besides the fact that some of those things are unsafe for certain trails, it reminds me that people experience national parks in different ways. Some visitors see a visit to a national park as a place to shop and walk around the main areas. Others see it as a place to do some backpacking and backcountry camping. Others even see it as a place to exist without actually interacting with it. None of these experiences are better or worse than others. All of these experiences are valid and should be protected and available in our national parks. 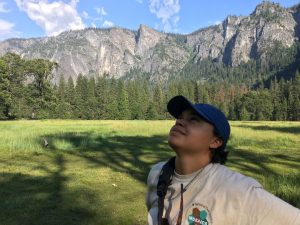 Rocking the Mosaics in Science shirt in the park!

There are differences in ways that generations experience national parks as well. There is a stereotype that young people are disconnected from the natural world and don’t stop to appreciate it, which I beg to differ considering the widespread use of hashtags during the park centennial celebration or varying environmental movements. Selfie culture is a thing, but it can spread the word of the awesomeness of our parks! On the other side, there’s a stereotype that older generations don’t have the drive or mobility to get close with nature, and only want to experience it from their RV or bus. From my time in the park, I’ve seen tons of people that live in these stereotypes and also tons that break outside of them. Either way, people are visiting and contributing to the park! As long as the park remains accessible to all of those different experiences, the national park is doing its duty to allow people to see nature at its best. That includes people with handicaps and disabilities, people from other cultures with different languages, people with children, and so on. At Yosemite, I believe they are doing just that!

I am a Mosaics in Science Intern at Yosemite National Park doing herpetological conservation. I will be graduating in December 2017 with a bachelor's in Wildlife Sciences and another in Forestry from the Warnell School of Forestry and Natural Resources at the University of Georgia. Upon graduation, I aspire to obtain a master's or doctorate degree in wildlife conservation and ecology. I have always had a passion for the environment and our natural resources, and I am excited to continue this in my education and career in life. 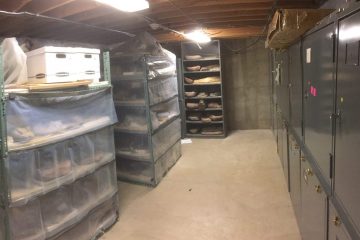 Hi everyone, from the post-workshop end of time and space! This is the first of my pre-workshop event posts that I’m writing post-workshop. A major component of our work at Dinosaur National Monument was organizing Read more… 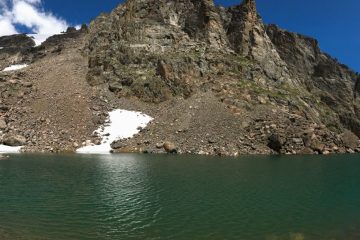 Yesterday, I hiked to Rocky’s only remaining glacier, Andrews. We began our day by meandering around a few neighboring lakes: Nymph, Dream, Emerald, and Haiyaha. Then, we headed south towards the Loch, and started the Read more…