After a nearly 70 year absence, 41 wolves from Canada and northwest Montana were reintroduced to Yellowstone National Park between 1995 and 1997. Predation is a fundamental ecological process, therefore research is most often conducted using large carnivores. Wolf predation has been amongst the best-studied predator-prey relationships of all. Doug Smith, a senior wildlife biologist manages wolf programs along with several other programs. Him and his crew catch and collar wolves of various wolf packs located in the park to effectively track their movement. I am pleased to say that I was able to meet Doug Smith along with some other wolf project crew members, and assist them in studying wolf clusters in Northern Yellowstone. 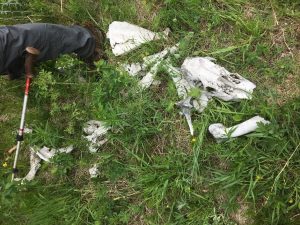 Wolf clusters are areas where wolves are observed (via GPS collars) to spend a significant amount of time. pack locations are updated roughly every 30 minutes, therefore if the wolves have, for example made a kill, or are bedding down, there will be a cluster of GPS points. Once the clusters are found, crew members hike out to these clusters and look for hair, scat, signs of bedding, and bone shards to name a few. I was able to tag along with the crew and look for these signs at several wolf clusters. While surveying these clusters, we found various bone shards and other remnants of wolf kills. 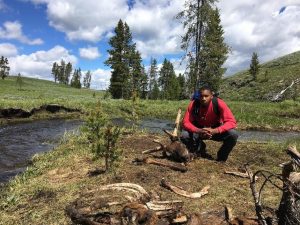 We also found hair, scat and bed sites, but the kills were must more interesting to see! If bones were found, samples were taken from the carcass to determine overall health and age of the prey. The data collected from GPS clusters along with things found at cluster sites are used to determine, on average, territory, how frequent a pack is making a kill, and how much they are consuming. I was very fortunate to get to see an adult wolf, two cubs playing outside of  a den site, and even the alpha female of one of the packs! 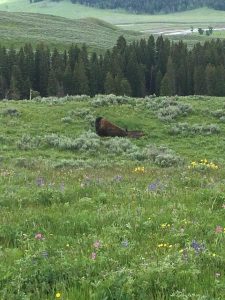 I am very lucky to have been able to meet, and work with such dedicated people. “Spread the good word about wolves to all your friends and family”‘ says Doug Smith. Wolves play a very important role in the ecosystem, and are very rewarding to see in the wild. Wolf populations should be protected to be maintain an ecological balance, as well as to be observed by future generations.