Since its emergence in 2006, white nose syndrome (WNS) has killed over 5 million bats across the Northeast region. The disease is caused by a fungus that destroys the bats’ skin and wings, leading to dehydration or starvation. WNS has spread rapidly throughout the eastern U.S. and some occurrences have recently been documented in the West. National parks and monuments throughout the West are closely monitoring bat populations for any signs of WNS. Lava Beds National Monument is no different; the Bat and Cave Team here monitors bat populations to estimate their numbers and watch out for irregular behavior.

One of the methods to estimate bat populations is mobile acoustic monitoring along a transect. This week, I accompanied the Lava Beds Bat and Cave Team on a mobile transect for the first time! We attached a microphone to a large post on a car and then recorded over 50 bat echolocation calls as we drove along the park. Afterwards, we processed the data to identify the bat species we encountered and plotted them on a map. If you’d like to see the results we found on Google Earth, click here to download the KMZ file! 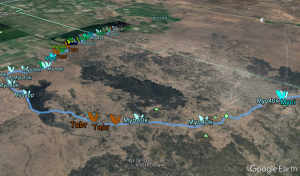 Transect we drove along for mobile acoustic monitoring

Although acoustic monitoring is an integral part of protecting the bats at Lava Beds, many of the visitors to the park aren’t aware of it or how it works. That’s where my interpretative program comes in! By incorporating real-time acoustic monitoring into an evening program, visitors can experience echolocation firsthand and connect with bats as well as science and nature as a whole. So far, I’ve done three of these “bat walks” and I’m amazed at the level of enthusiasm visitors of all ages have for bats. They’re curious about topics like species differences, migration, and hibernation. Throughout the summer, I hope that I can keep improving my program to further facilitate this curiosity! 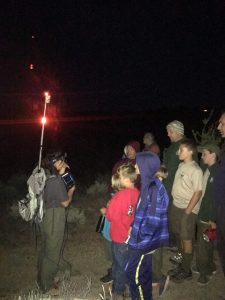