Leatherback sea turtles are the largest of all living turtles, weighing up to 2000 pounds. They’re also the most pelagic (open ocean dwelling), while other sea turtle species spend most of their lives in neritic (nearshore) environments. Unlike other sea turtle species, leatherbacks lack a bony carapace (shell). Instead of scutes (scales), their carapace is composed of a layer of thin, tough, rubbery skin that is strengthened by thousands of tiny bone plates. This allows them to expand their lungs while they dive to depths deeper than 1,000m to feed, primarily on jellyfish. Like the green turtles I’m working with, leatherbacks are also listed as an endangered species.

Dr. Kelly Stewart, Southwest Fisheries Science Center (NOAA), leads a field program at Sandy Point National Wildlife Refuge in St. Croix. The program focuses on genetically fingerprinting leatherback hatchlings as they leave the beach after emerging from their nests.  The purpose of her study is to determine the age to maturity. This is an important measure that allows scientists to evaluate population status and design management strategies to protect this long-living, slowly maturing species. While obtaining this measure seems simple, it is particularly difficult to do so for sea turtle populations, especially for pelagic species like leatherbacks. 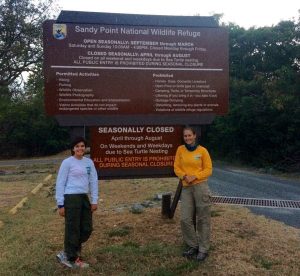 I had the opportunity to volunteer with her interns in patrolling the beach at Sandy Point National Wildlife Refuge for nesting leatherbacks. First patrol began at 7:30pm and last patrol was at 3am. The beach was divided into sections that had to be cleared, checked for turtles, every 45 minutes. This was not an easy task by any means. We had to walk up and down the beach, exposed to the elements (rain, insects, etc.) until just before sunrise. I couldn’t imagine having to do it on a regular basis for several months … and then I held my first hatchling. At that very moment, something clicked and it all made sense. Roughly one in one thousand hatchlings survive to adulthood. Very little is known about the life history of leatherbacks, largely because they spend most of their lives in pelagic environments. I would happily trudge through sand all night to help find out more about these fascinating creatures.