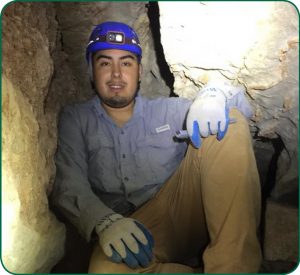 Sebastian Alvarez – Sebastian worked on the Unstable Slope Management Project (USMP) at Coronado National Memorial. This project was designed to identify, measure, and assign a rating to the unstable slopes located along roads and trails of the park. Ratings were given using the USMP rating criteria, which required learning how to use GPS, a compass and a Laser Point Range Finder. The data that was collected was then uploaded into a central database. The data was processed using GIS to map out the slopes, imagery analysis, and landscape photography. This was a very important project not only because it will help prepare for any future hazards events, but it also served as a trial run to see if this technology and assessment system could be used in other national parks. 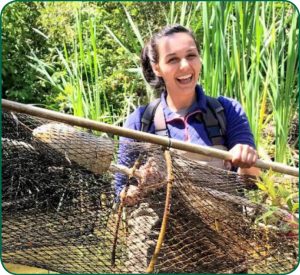 Nina Trusso – Nina’s main project at Point Reyes National Seashore focused on the endangered Coho salmon. She worked on pre- construction monitoring for the Salmon Habitat Enhancement Project, as well as monitoring of Coho populations. This monitoring took place at Redwood Creek in Muir Woods National Monument. In order to determine the conditions of Redwood Creek, Nina examined the presence of large woody debris, rip rap, shallow/deep pools and rock size distribution. Examining all these components allowed her to create a map of the creek to be used for the enhancement project. The other part of the project was fish population monitoring, which was conducted through the electrofishing method. In this effort, the Point Reyes crew, including fellow Mosaics intern Katlyn Fuentes, joined her. Once a fish is caught, it is measured, weighed and some are given a PIT (passive integrated transponder) tag to track the fish throughout its life. 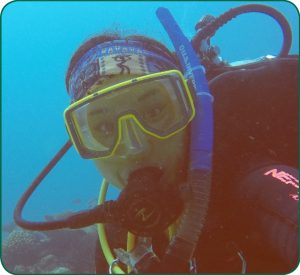 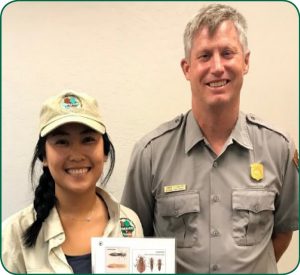 Katherine Ko – Katherine’s main focus this summer at Glen Canyon National Recreation Area was the Dragonfly Mercury Project. This project is an ongoing study to assess the levels of mercury in our national parks. Over the past seven years, more than 90 NPS units and 3,000 citizen scientists have contributed to this project. She also scouted sites for sampling, promoted the project in the community, and took citizen scientists out into the park to sample dragonfly larvae.