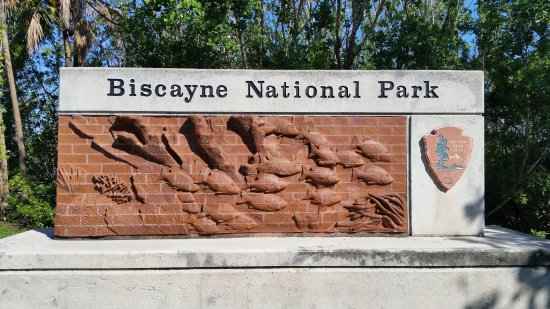 Since I still have several weeks before I officially move to my site, I’ve decided to produce a brief overview of what I have read about my site.

Located at the southern tip of Florida and right below Miami lies Biscayne National Park. Standing in at 173,000 acres in size, only 5% of the park is land. Within this park are four different ecosystems: fringe mangrove along the mainland, the waters of Biscayne bay, the northernmost Florida Keys, and a portion of the third largest coral reef in the world. The park supports over 500 species of fish, birds, plants, and mammals.

In 1968, President Lyndon B Johnson signed into law the creation of Biscayne National Monument. It was further expanded in 1974, and finally designated a national park in 1980. Interestingly enough, the company president of Hoover vaccums Herbert Hoover Jr. played a large part in the creation of of the park. A lover of the park, he helped fund a campaign opposing planned development and even brought legislators aboard blimps to see the beauty of the area.

Biscayne National Park is one of seven parks in the South Florida/Carribbean and Inventory Monitoring Network (SFCN). Across the United States are 32 networks. The NPS Inventory and Monitoring Program serves two main goals:

Vital signs are a selected subset of physical, chemical, and biological elements and processes of park ecosystems that represent the health of park resources. The information collected through these programs help parks make science-based decisions that help protect these areas.

One of these vital signs are Colonial Nesting Birds which I will be working on throughout my internship. Colonial nesting birds are sensitive to fisheries, habitat health, and are vulnerable to contaminants. Monitoring efforts of these birds include: presence, size and distribution of nesting colonies, and reproductive success. The focal species in Biscayne are: double-crested cormorant, great blue heron, great white heron, great egret, roseate spoonbill, and white ibis.