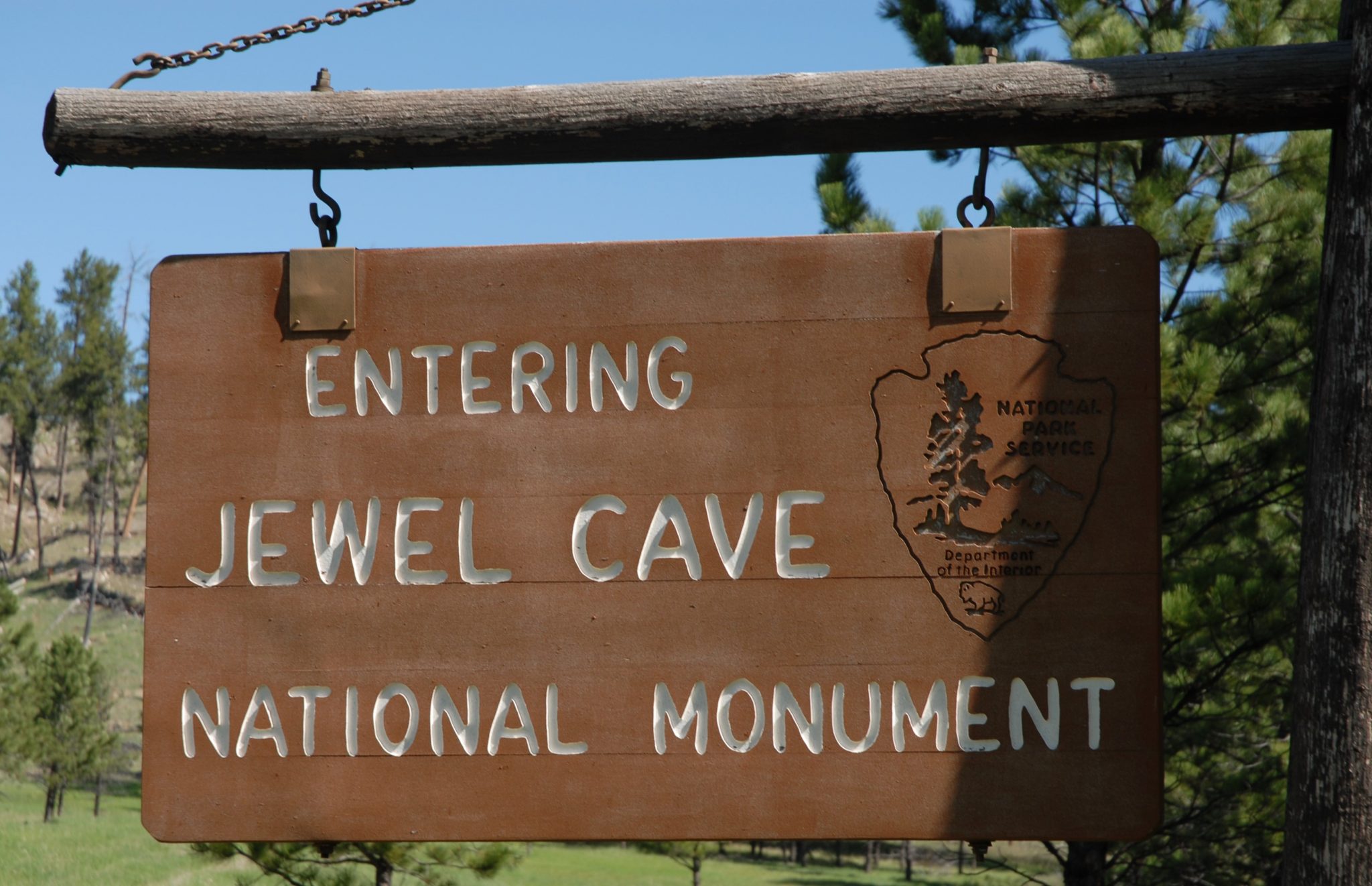 In only two weeks, I’ve learned a plethora of details about Jewel Cave National Monument. Before you get your hopes up, no, the ‘jewels’ that cover the cavern walls aren’t rubies and diamonds, but various crystalline forms of calcite. In its entirety, Jewel Cave is the third largest network of caves in the world behind Mammoth Cave in Kentucky (400+ miles) and Sistema Sac Atun in Mexico (215+ miles). It’s possible that Jewel Cave may ascend in rank since only 3-5% of the total volume has been surveyed. Yes, that’s right, the caves haven’t been fully mapped yet. Volunteer caving teams are sent in every few weeks or months to map new caverns. By this summer’s end, the park is expected to celebrate its 200th mile of charted passageways! Contained within an area of only a few square miles, the caves aren’t very linear but instead densely contorted passages much like holes in a sponge. 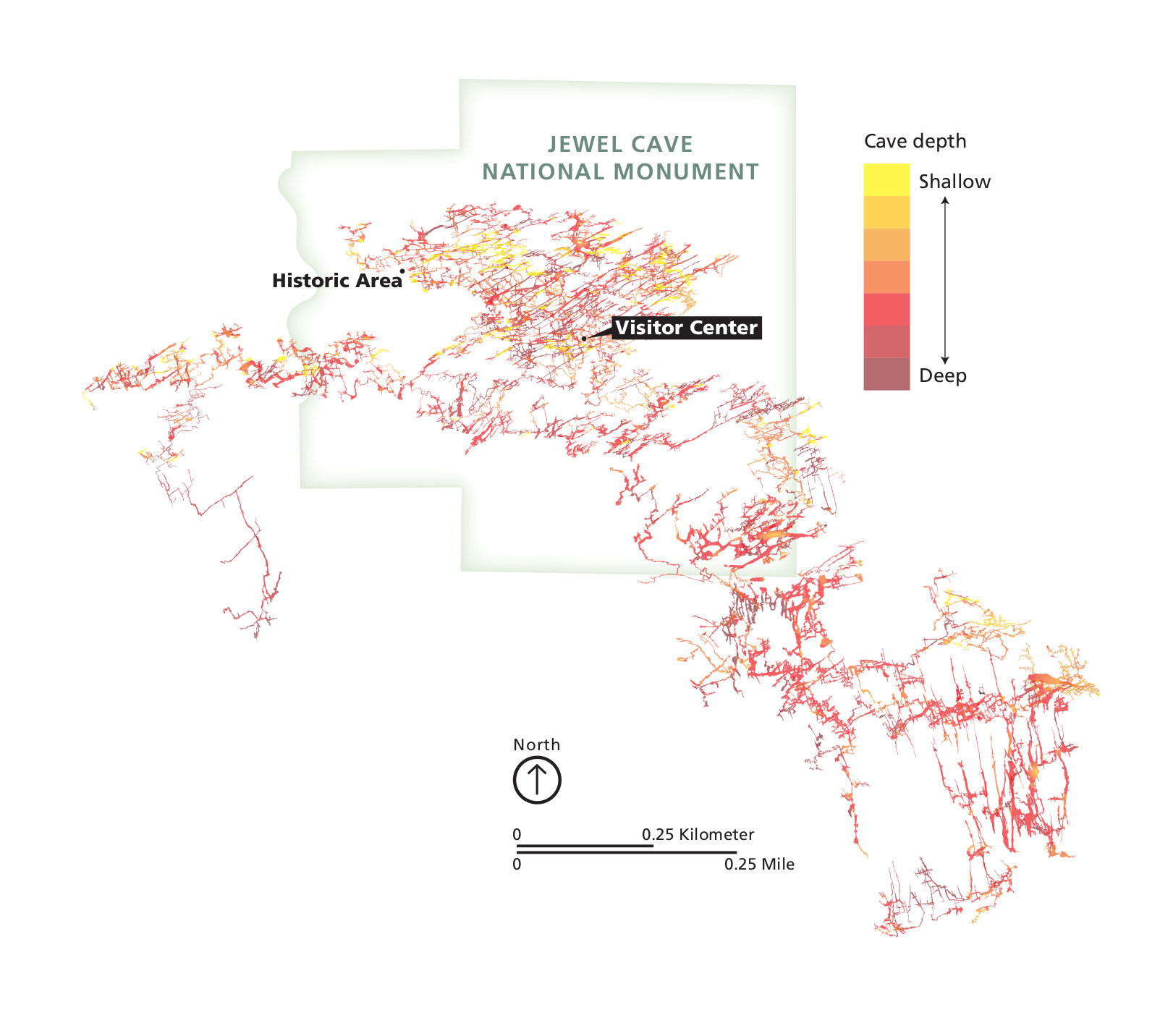 A map depicting the spatial layout of Jewel Cave passages relative to the park boundary on the surface. Image gathered from
npmaps.com/jewel-cave/

During tourist season, the monument is a popular destination due its central location between other nearby national parks and monuments, including Mount Rushmore, Badlands, Devil’s Tower, and Wind Cave. Now, I could exhaust you with more technical park details, such as the hydrology behind why the cave is mostly dry, how the cave “breathes,” or even the controversies of how the cave formed relative to Wind Cave (which is also within the same limestone unit 30 miles away), but I will spare you the details in hopes that you visit and learn about the formations yourself! 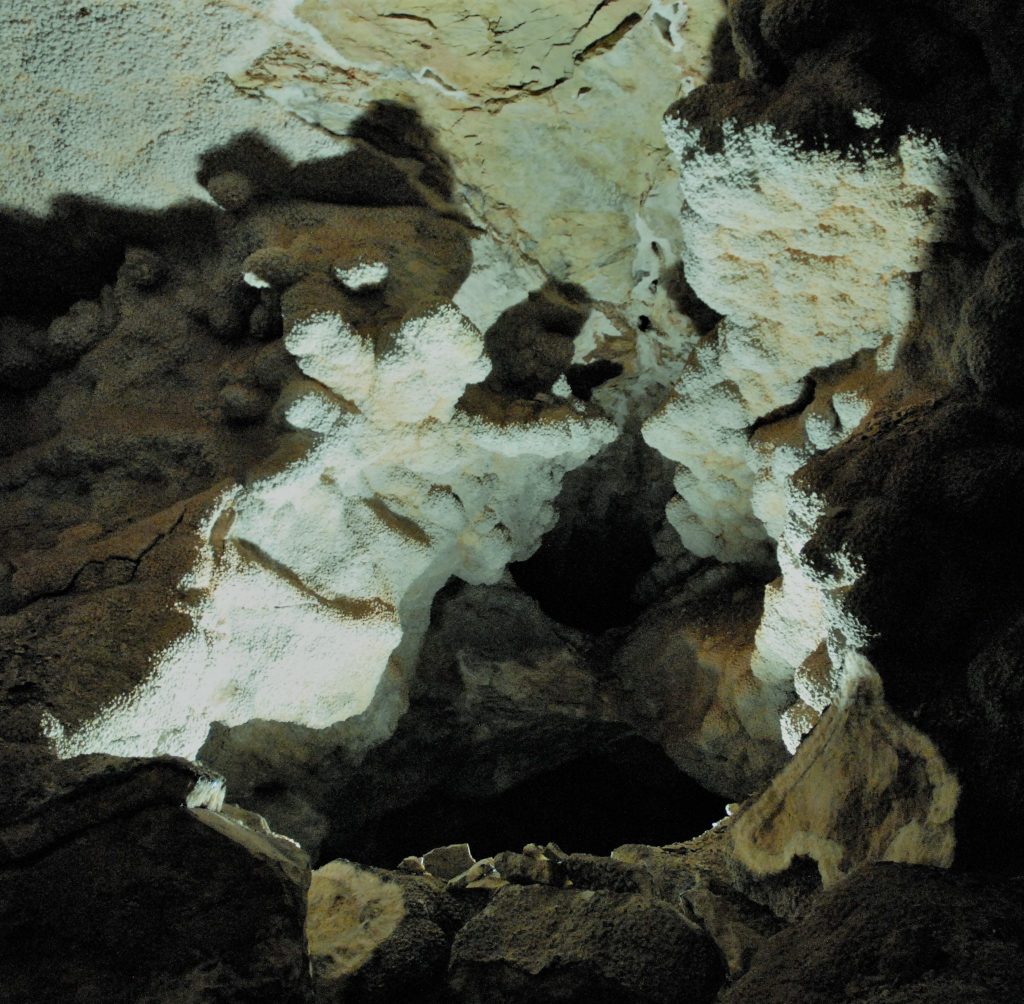 An illuminated section of the cave covered by nail head spar, a dull-tipped calcite formation. Most surfaces within the Jewel Cave are covered in this manner, similar to a macroscopic geode. Image is altered to depict textures. 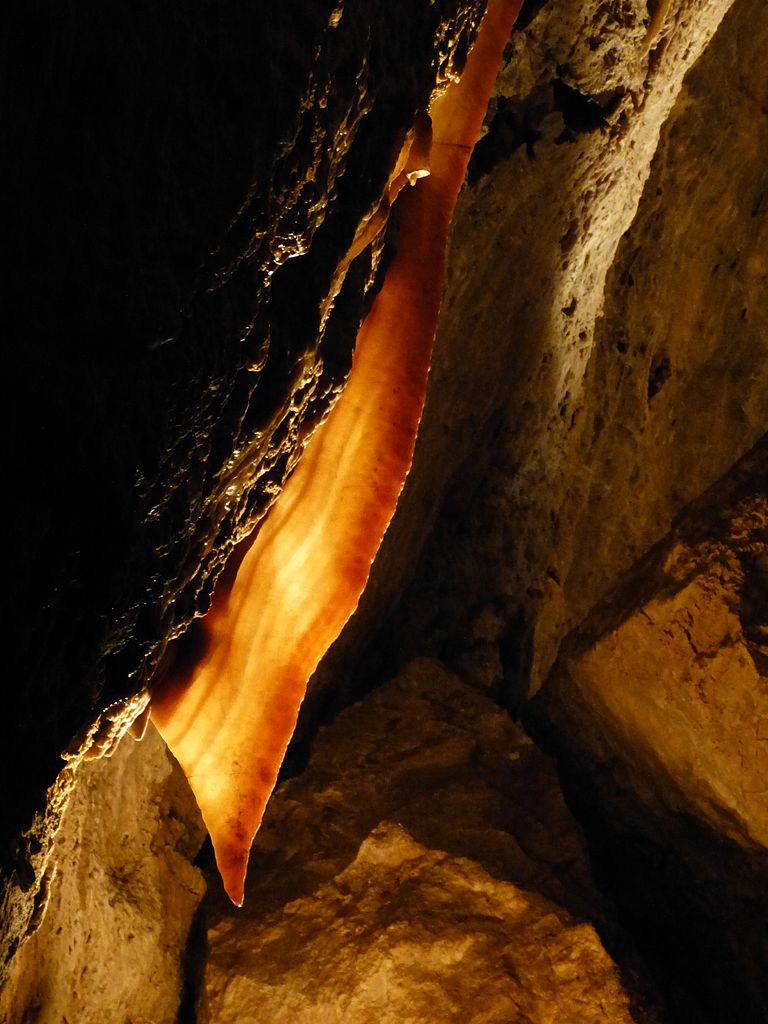 One of the more well-known formations at Jewel Cave: the Cave Bacon. This draping formation stretches over 20 feet and comes down to a point which will eventually become a stalactite. Colors are due to chemical impurities with the calcite, namely iron oxides. Photo taken by Renata Muru (2012).

National parks like to emphasize local history, and Jewel Cave is no different. Remarkably, no evidence exists that the caves were known about prior to 1900 when Frank and Albert Michaud found air blowing out of a small opening on the surface.  The brothers dynamited open an entrance, which then allowed them to fit into the crystal-filled caves. For the next few years, they tried to attract tourists to the caves, but the region was too remote at the time to entice curiosity. Their efforts did not go unnoticed, however. In 1908, Theodore Roosevelt declared the site a national monument under the Antiquities Act of 1906. History is sparse after this time. The CCC developed the site further in the 1930s, where they expanded the cave’s natural entrance. In 1933, the site was officially handed over the National Park Service. It wasn’t until about 1960, when two prominent climbers Herb and Jan Conn were introduced to Jewel Cave. For the next 20 years, they discovered and mapped over 60 miles of passageways. Their efforts inspired volunteer explorers from all over the world to help survey new caves. In the 1980’s, the Conns passed the torch on to Mike Wiles, among others, who helped chart another 60 or so miles and pioneer research about Jewel Cave and the Black Hills. Wiles went on to attain a chief position at the park, where he educates and trains the next generation of cavers and continues his studies. 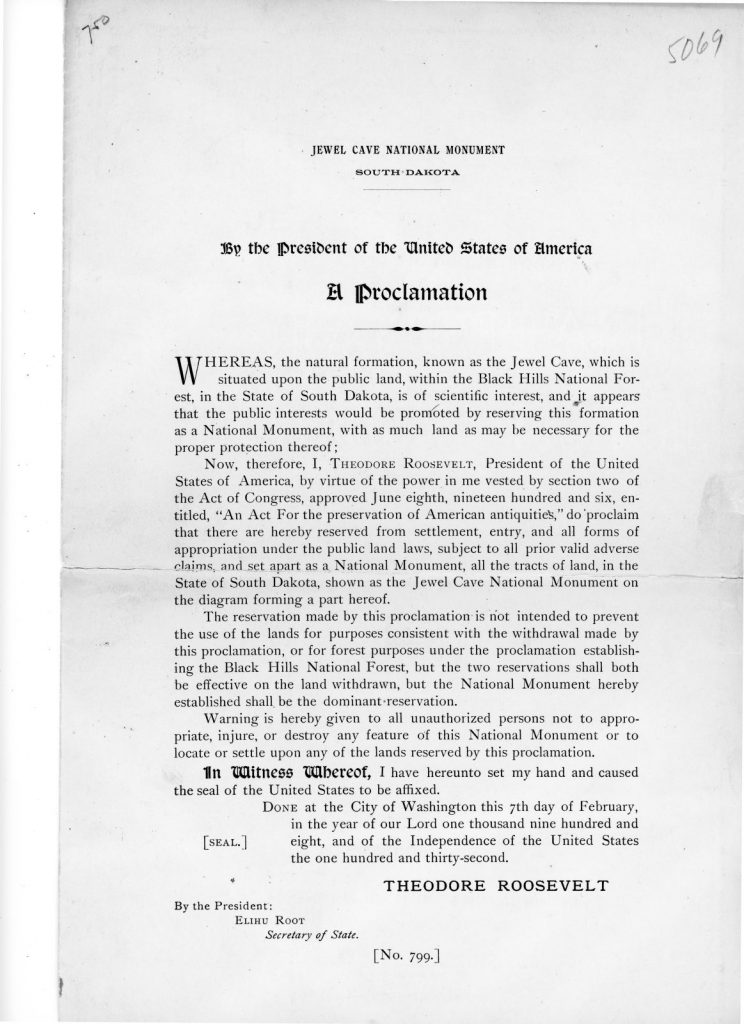 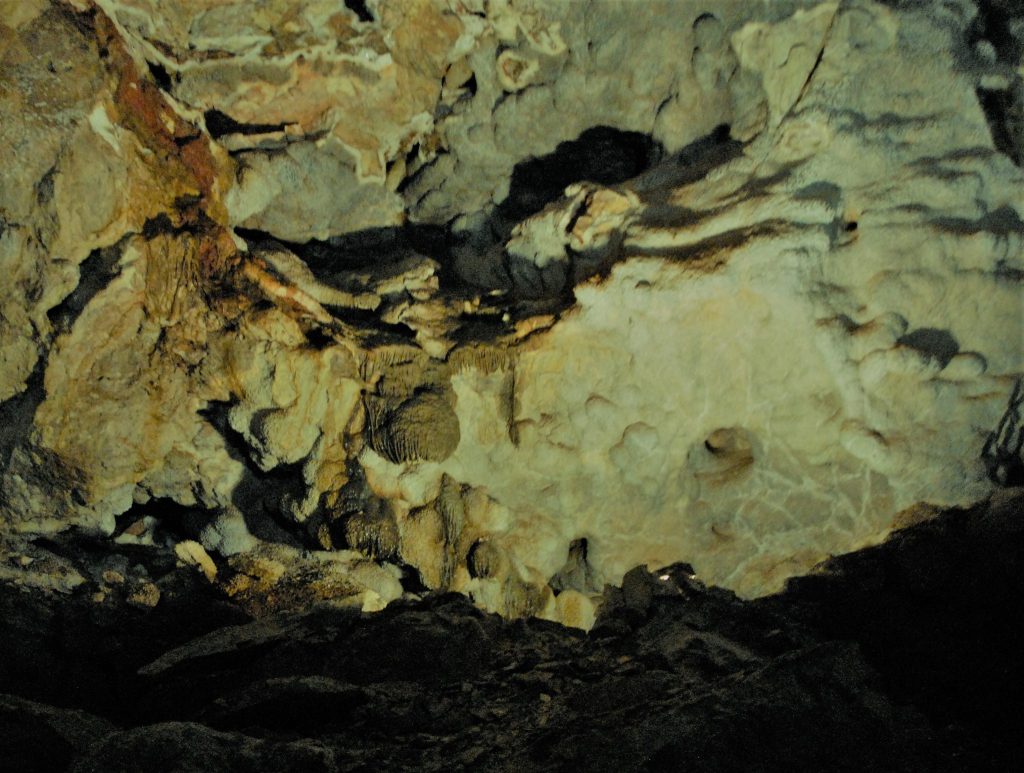 A wall which features brown-colored flowstone formations (center). To the right is more nail head spar. Image is altered to depict textures.

As a resource management intern, I’ll be involved in collecting cave data, monitoring bats, and participating in various side projects. While the surface heats up this summer, I’ll be nice and cool down below. Well, actually no. I’ll be sweaty and out-of-breath as I climb and crawl my way throughout the caves, but at least I won’t have to worry about getting sunburnt! 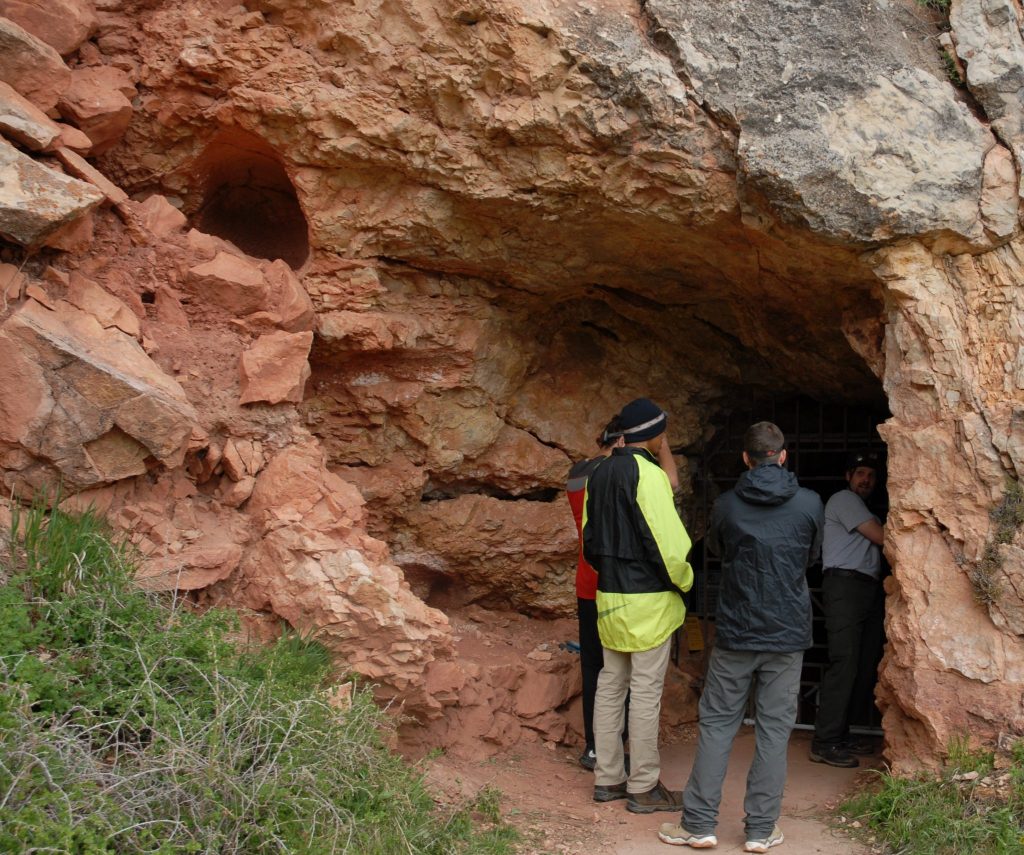 The resource management team about to enter through Jewel Cave’s historic entrance. Bats are commonly found here. This is the entrance cleared out by the CCC in the 1930’s.