Western Pond Turtles are a native California species that live in ponds or streams with a lot of emergent woody debris so they can climb up and bask in the sun. They tend to be quiet and shy and make sure to jump into the water to hide if they hear people coming. High levels of predation (from animals like raccoons) and habitat destruction have placed these turtles on the IUCN Red List. They are battling steep population declines, but many organizations are stepping up to help! While doing environmental work around California, I’ve run into these elusive cuties a couple times and this summer  in the Golden Gate National Recreation Area, I’m sure to see a whole lot more of them. 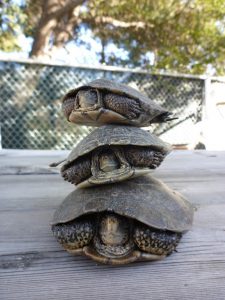 Read on to hear about my turtle adventures and learn about the big reunion I have planned with some of my turtle friends later this summer!

In the back of our RCD office, we built a handicapped turtle pond where we could care for turtles with missing legs (taken by pesky raccoons!) or even turtles that just needed some TLC before returning to the wild. During my time at the RCD, I got to meet Lucky. She was lucky enough to get away from a raccoon, but not before losing one of her front legs and scraping her eye. After we found her, a local veterinarian offered to give her eye surgery for free! After the surgery, I gave her eye drops for two weeks and made sure the other turtles didn’t eat all her food while she recovered. Lucky is doing well and can be found basking happily in the sun in the RCD’s turtle pond. 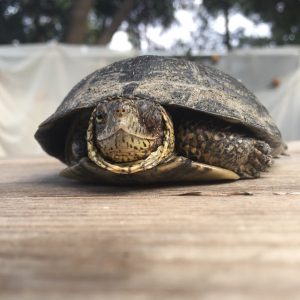 All my practice with Lucky helped me get a job in the San Francisco Zoo’s Conservation and Wellness Center taking care of their Western Pond Turtles! The SF Zoo runs a turtle head start program and raises turtles from eggs brought over by the National Park Service until they are big enough to release back into the wild. If the turtle eggs are left outside and are not collected, predators will eat the eggs before the night is through. Collecting the eggs and raising turtles in zoos gives them a chance to recover their population numbers.

After all my time raising and taking care of Western Pond Turtles, this summer I get to track them in the wild! Once a week, my partner from the National Park Service, Karl, and I go into the field to record each turtles location. Before they are released by the zoo, a small antenna is attached to their shells. Using this antenna and telemetry equipment, we can track the turtles movements around Muir Beach. 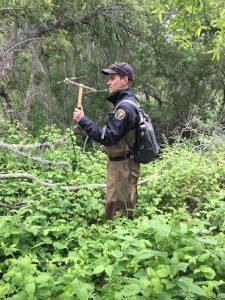 In a few weeks, a new batch of turtles I helped raise at the San Francisco Zoo will be released into the Golden Gate National Recreation Area! I’m so excited for our reunion and to be able to finish my rest of my Mosaics in Science Internship with old friends.