Good news: the first week of fieldwork was a success!!!

This past week marked the beginning of the summer field work season for the fisheries crew and myself! It was a busy week filled with many exciting learning experiences as we began a new sampling project out in the wetlands. This particular project, which we’re referring to as “Giacomini Sampling” – (and of which I will go into greater detail in my next blog post) – will take us a total of two weeks to complete, as we trek out to sometimes remote locations to perform biological surveys. These surveys  mainly focused on determining water-quality and the relative abundance/diversity of fish communities within the wetlands.

Our days consisted of: 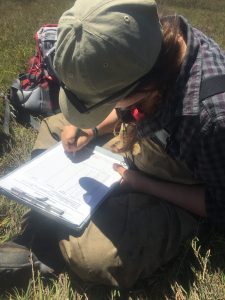 Myself, recording the environmental and biological data that we were collecting out in the field; Photo by Priscilla Sisommout.

We practiced two different methods of survey-techniques this week: seining and electrofishing. A seine is a long, rectangular fishing net with weights on the bottom and floats at the top. To “seine” a particular site, we would methodically block off an area of a creek or pond, then pull the net through the water to collect any fishes that (hopefully) reside in these areas. After pulling the net onto the beach, the fishes were quickly removed from the net and placed in buckets with aerators, where we would then measure and record their length and species ID. We continued repeating these steps until we noticed a consistent depletion (when we pull up less fishes than before), at which time we would gently release all of our collected fishes back into the water and move on to the next site. 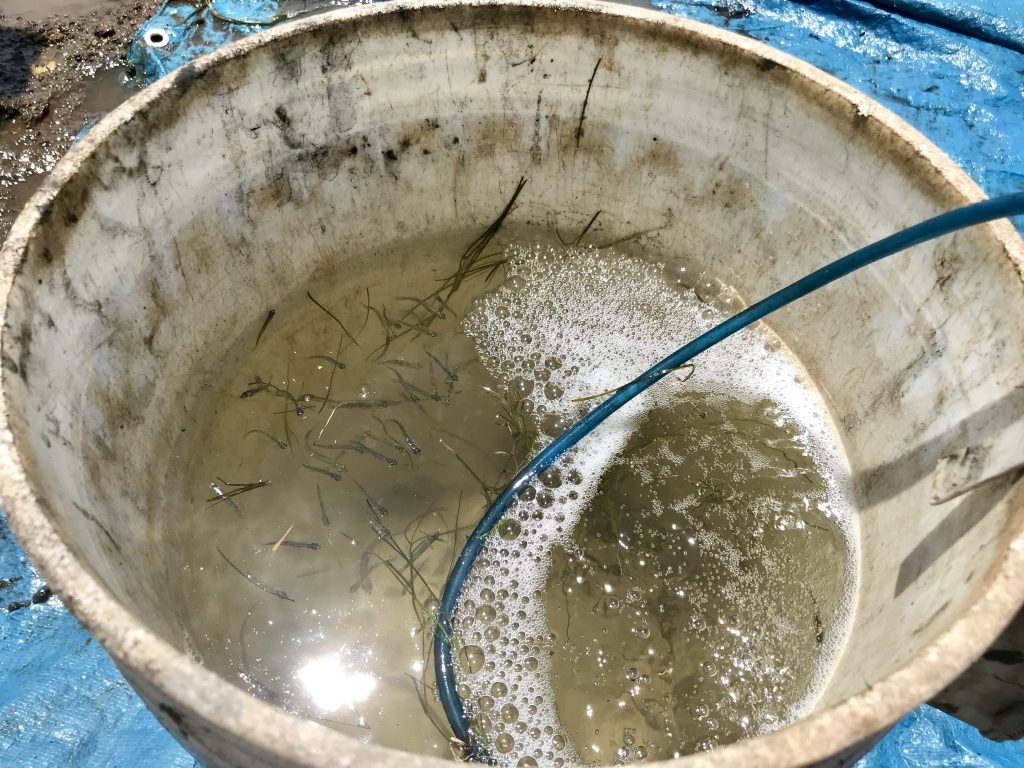 One of our aerated buckets containing all of the fishes we collected during one seine haul; Photo by Katlyn Fuentes.

Electrofishing is a much different method of capture – though just as exciting as seining! Electrofishing is a multi-step process involving one person using an electrode to run electrical currents at a controlled voltage through a body of water, briefly stunning fishes and other small invertebrates (like the bullfrog tadpole shown in the photo below) that are then quickly netted by another person and collected for the same measuring and recording as previously described. While this method might not sound particularly pleasant for the organisms being affected by the shocks, it’s important to note that when done correctly, this technique causes no permanent harm to the animals being collected! And I’m happy to share that all of the animals that we captured via electrofishing where returned safe and sound, back to their homes. 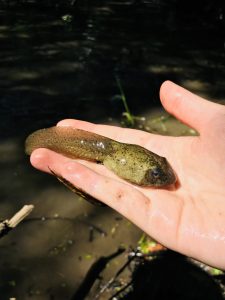 A bullfrog tadpole (Lithobates catesbeianus) we collected via electrofishing; Photo by Katlyn Fuentes.

FUN FACT: Just like our use of electrofishing equipment, there are some species of animals that can also utilize electricity! Electric eels (Electrophorus electricus), for example, can generate up to 600 volts of electricity that they use to stun prey and protect themselves from predators. The shock from these fishes have even been known to knock horses off of their feet, and – on very rare occasions – have even killed large animals like humans. Lucky for us here in the United States, these fish are only found in South America – so there’s no risk of finding these guys in our waterways. 😉

All in all, this week has been rife with opportunities to grow both in strength and knowledge. I’m excited to continue this sampling project and learn more about the amazing fish species that can be found within the park and what we can do to protect them!

Check back next week for a blog post focusing more on the history and significance of our Giacomini Sampling project. If you have any questions or comments, please feel free to reach out and leave a message in the comments section below! Until next time…