The Man Who Knows Everything…. 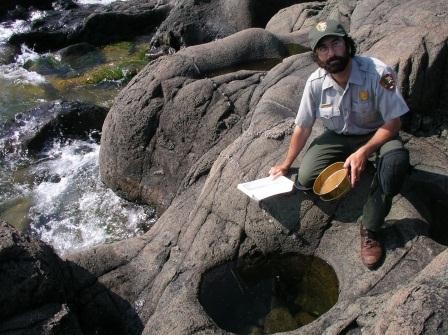 17 Jun The Man Who Knows Everything….

Alex is an aquatic ecologist with the Great Lakes Inventory and Monitoring Network. His research primarily takes place at Isle Royale which was his second stop on his park service intern journey. In 1998 he started working at the Apostle Islands National Lakeshore Park in Wisconsin as an intern. Often times researchers and national park employees located in similar areas or doing similar research (in this case around Lake Superior) keep in contact with each other. Through mutual contacts, Alex obtained a seasonal position at Isle Royale. He was not yet sure if he liked it but after 2 years he realized he more than liked it, he loved it.

During this time he pursued an undergraduate degree in Fisheries and Wildlife with a focus on birds. Alex’s graduate work was based on aquatic ecology specifically aquatic insects. When the inventory and monitoring job came up it was a perfect fit. Alex’s primary job is researching water quality on 9 inland lakes on the island. He takes into account the chemical and physical conditions of the lakes which he uses to create a baseline data system to measure possible condition changes and how changes in water condition can impact habitat. Not only was it relevant to his studies but Alex was able to expand the program to include aquatic insects since it is important to know how organisms are responding to those changes.

Moving away from the typical business questions I asked Alex to share his 4 favorite things about the island or his job in general.

1. He loves any remote wetland bogs or meadows based on the array of flowers and plant life diversity.

2. Boreal chorus frogs fascinate him. In other places, Boreal chorus frogs are nondiscriminatory when it comes to where they make themselves comfortable and can often be found in roadside ditches but on Isle Royale, they only inhabit rocky shoreline pools.

3.Spring bird migration and habits also interest him. Birds come from the mainland and stop migration here possibly due to lack of visibility during foggy weather so there is a lot of diversity at certain points on the island.

4.  After being an employee on an island for a while you get to know a bunch of different places. One of Alex’s favorite things to do is to call in at the most obscure or lesser known places when doing radio checks.

After asking Alex if he had any advice for an intern or anyone looking to pursue a career in the National Park Service system he said that it is helpful to be open to moving around and to keep a wide perspective. Being patient also plays a major role in creating a successful career. It took him 15 years to become a permanent employee. After being seasonal he never thought he would come back, he wasn’t sure if he wanted to work at Isle Royale permanently. He told himself that he would give it one season to see if he liked it. After returning as a permanent employee he noticed how much he loved being back at the island and being with everyone he had come to know over the years.

In parting, Alex explained that the reason he loves his job so much is that with each scientific answer we obtain we scratch a surface that reveals more questions, the mysteries he has yet to uncover makes him want to come back every year.