“What I learned in boating school is….” 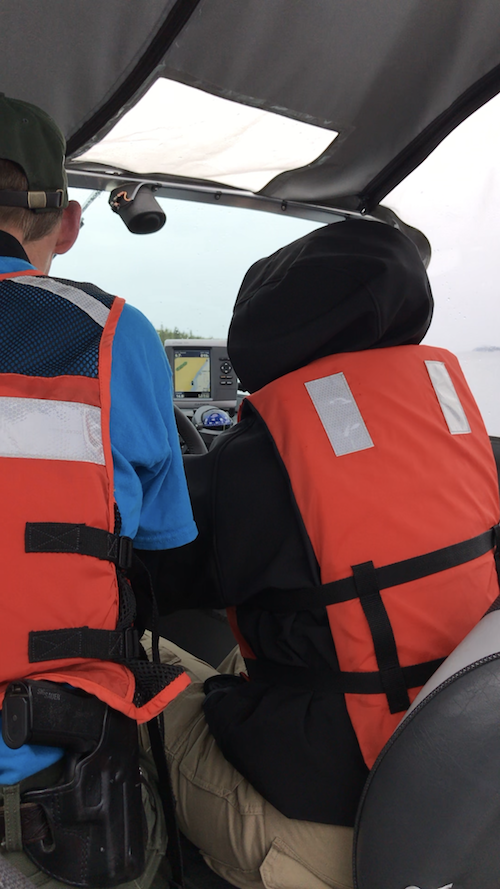 Are some of the most recognizable words from a hilarious SpongeBob Squarepants episode. After completing MOCC training I can honestly see why sponge bob had a few problems. The thought of driving a boat terrified me, people always compare Lake Superior to an ocean because of its waves and ability to change from calm to choppy within minutes.  Our motorboat operation certification course was spread over the course of three days and is meant to be the training wheels of boat operation. On the first day, we had a normal classroom setup where we went over powerpoints that detailed the basic components of a boat and some need to know information on boat operation. We then split into two groups, the first group (which was mine) participated in emergency procedure training. Firefighting was an unexpected part of this training but a necessity when it comes to boating since engine fires can be common. Next, we practiced techniques that can make lifting someone out of the water easier and how to throw rescue ropes and life-saving buoys to people that have fallen in far from the boat. 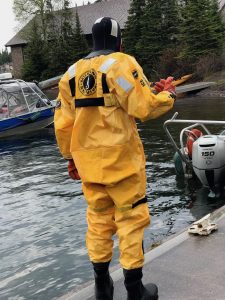 The gumby suit is used for cold water rescues, it keeps the user warm enough for them to rescue others.

The next part of the class was dedicated to Marlin spiking which is essentially rope knotting and rope design. Knots are a major part of boating since they are used to secure the boats to the dock daily. 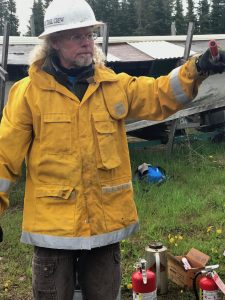 Our emergency procedure instructor shows us how to properly hold a flare, flares drip a molten substance when lit and it is important to keep away from body and not wave it around.

The next day was boating day for my group. Our instructors had two patterns set up that would also be part of our practice test the next day. We first practiced doing basic turning maneuvers before we moved on to the star pattern. This pattern was created to teach the boat operator about backing up and maneuvering in tight spaces. Buoys were arranged in a 5 point star pattern and we had to create a star in the buoys without letting more than the front half or the back half of our boat go through the buoys. The second pattern was almost everyone’s favorite. The serpentine pattern consisted of a starting gate and an ending gate with a slalom of buoys in between. We enter the starting gate with the boat on plane(full speed) and do tilted turns around the buoys in the pattern of a wriggling snake. After the ending gate, there is a single buoy that we must drive to still at full speed and our instructor yells PORT(Left) or STARBOARD(right) and we must turn in the direction he says and then counter steer after. Honestly, that was the scariest part for 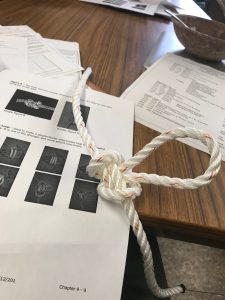 me. It seemed as if you’re going to hit the buoy until he suddenly yells the direction. After all of my group members complete the patterns and our heart rates return to normal we went back to practice docking and coming up to the side of other boats. Thanks to our instructors we all felt well prepared for test day. After completing our practical and written tests we were considered certified motorboat operators! This course is just the beginning, to truly feel comfortable boating it takes a lot of practice and friendly instruction.