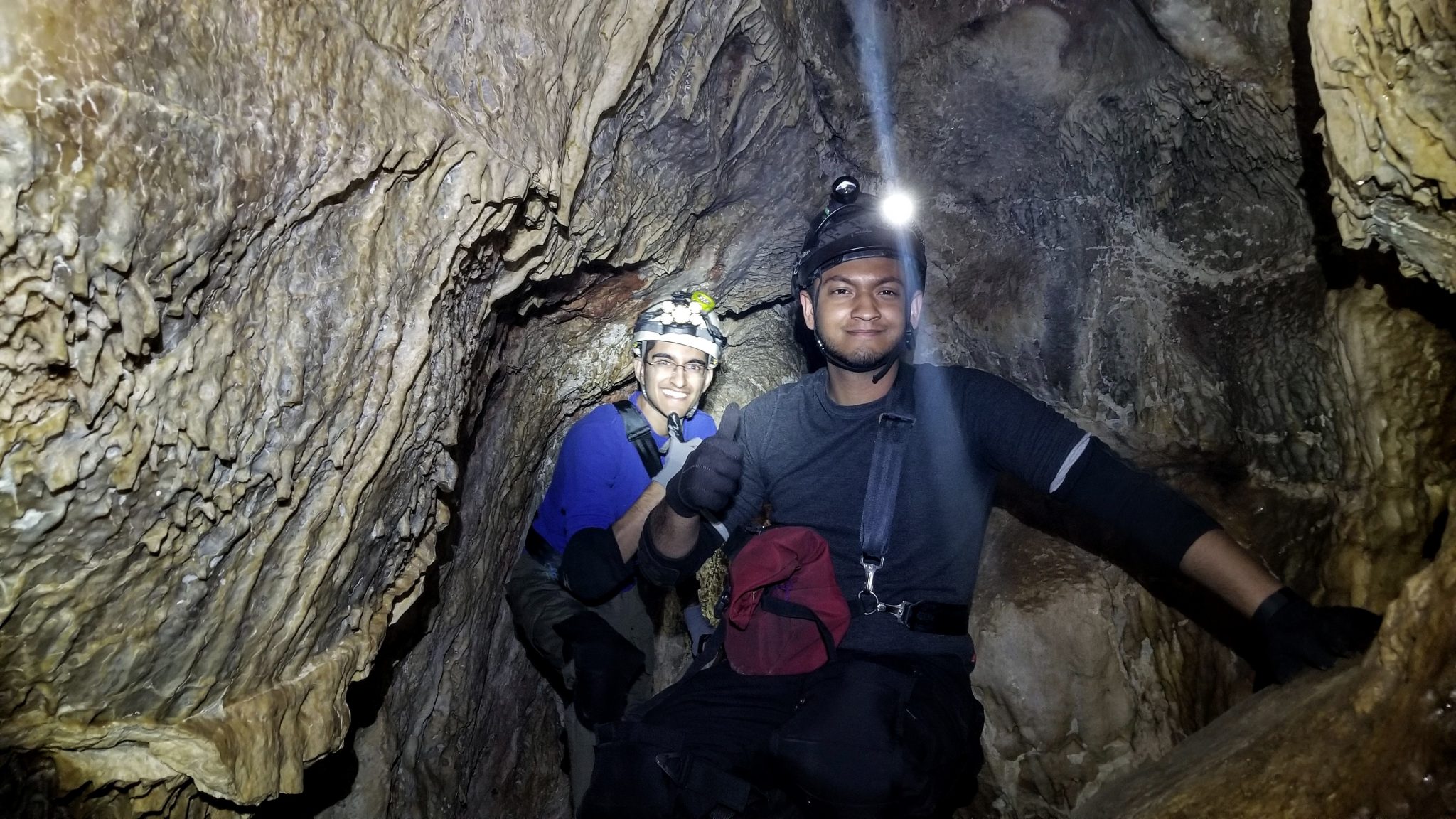 This summer is jam-packed. Even though Jewel Cave is a small monument, the resource management (RM) team is tasked with a broad range of important work. Aside from our daily duties, we’re available to assist with cave emergencies, maintenance projects, search & rescues, and decontamination. Our team is headed by Mike and Dan, the RM chief and RM lead, respectively. Together they manage myself and two other interns: Hunter and Arjan. While my focus area is geology, Hunter specializes in geophysics and Arjan in computer science. Together we make a well-rounded team. The three of us will be working on two main projects both in the caves and on the surface. 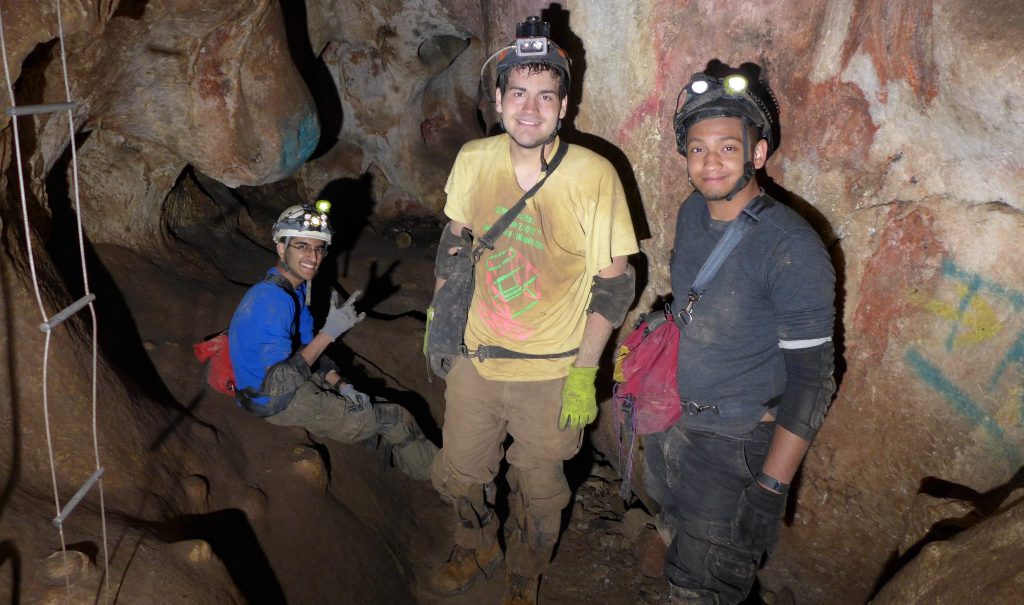 A photo of the 2018 Jewel Cave resource management interns on our first caving experience. From right to left, Arjan, Hunter, and myself.

First and foremost, I’ll be familiarizing myself with the surficial geology above Jewel Cave. Mike revealed that mistakes were made when surveyors mapped the southeastern Black Hills many decades ago. He hopes to revise the maps by enlisting the help of his interns. A few days back, he gave me a tour of the region and showed me where the local fault runs, the dipping of rock beds, and the specific limestone units we’re dealing with: the Minnelusa and Pahasapa limestones. He pointed out that the displacement of faulted beds were as high as 300 feet! The most troubling aspects of this fault are localized areas where the younger Minnelusa rocks sit beneath older Pahasapa rocks. Perhaps my understanding is flawed, but the geologic principle of superposition states that older strata sit beneath younger strata. So how is it that an older rock unit is found above a younger one in some areas? Unraveling the Jewel Cave fault’s mechanics will be critical in explaining how these beds came to be so intertwined. Mike wants to then relate surficial features with what is seen a few hundred feet below in Jewel Cave, which is entirely contained in the Pahasapa Limestone. He believes there must be fault-related structures, but because most walls are covered in thick secondary formations, we’re going to have a hard time seeing them. Nonetheless, we will spend all summer crawling around and searching for answers. 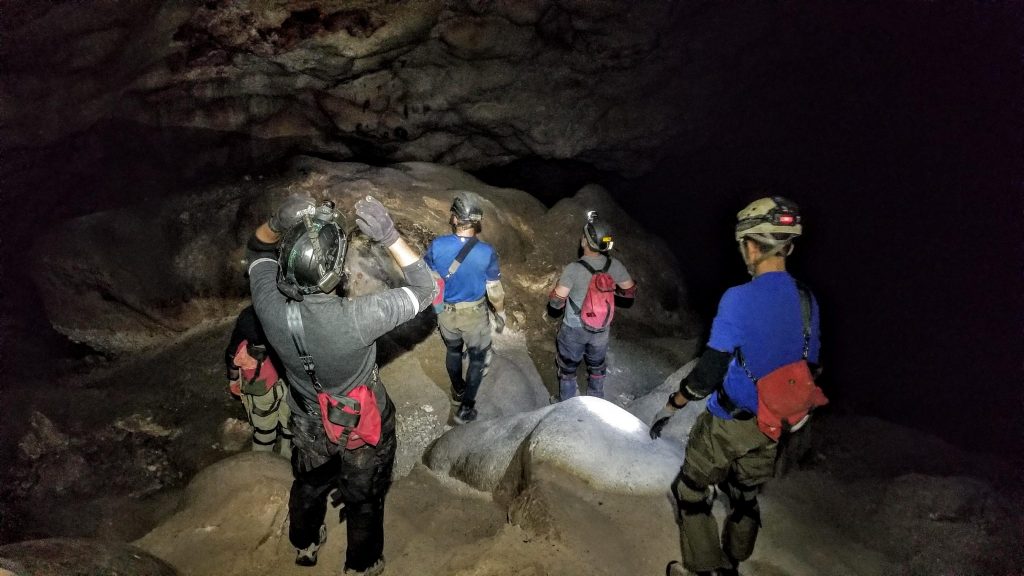 The resource management team assisting the US Forest Service inside of Davenport Cave. I’m adjusting my head lamp to get a better view of the room we’re standing in. It never ceases to amaze that this was all carved out by water.

When I’m not helping Mike elucidate the secrets of the cave, I’ll be working with Dan to monitor the bat species that live in the cave. In the coming weeks I’ll be setting up cameras and audio equipment so that we can track their interactions. Unfortunately, it was just reported that bats in Badlands National Park tested positive for P. destructans. Although they have not exhibited signs of the disease associated with this fungus, bats in the Black Hills are likely at-risk for the next few winters. P. destructans has killed millions of bats in the US in only 11 years. It’s a fungus that causes a disease known as White Nose Syndrome (WNS). The fungus thrives in most caves and infects hibernating bats when their immune system is suppressed. Spores grow and disintegrate wings and flesh. Bats with WNS rouse prematurely from hibernation in the winter, use up their energy stores, and die prematurely from starvation or exhaustion. Now, biology isn’t a strong suit of mine, but I understand the ecological implications if bat colonies were to collapse. Bats keep mosquito populations under control, for example. Pretty soon, the RM team will have to decide whether to enhance decontamination processes and how this fungus can be mitigated. 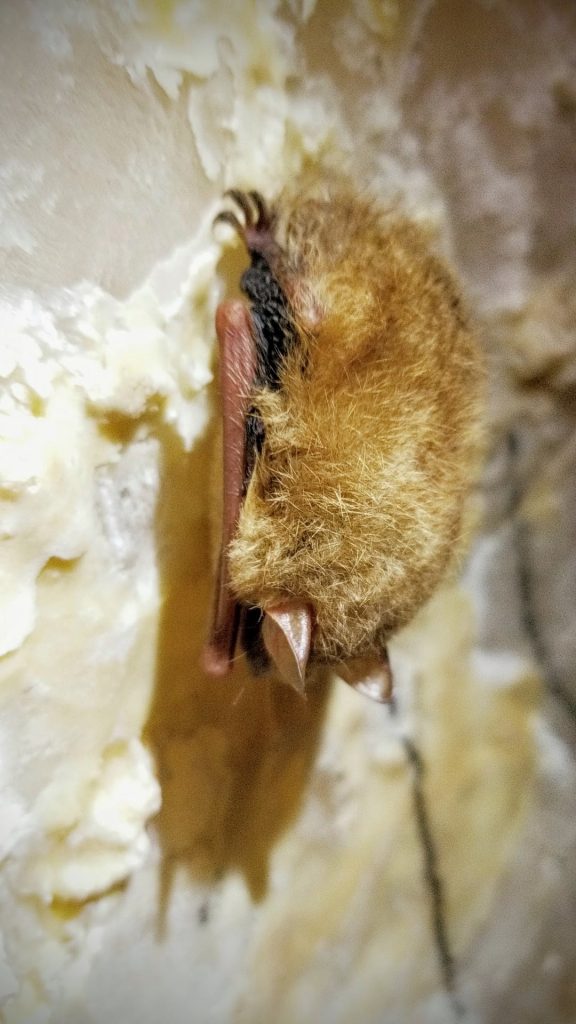 A small bat found in Davenport Cave, a major hibernaculum in the Black Hills region.

As a resource management assistant, my job is to manage ALL of the monument’s resources. That includes the caves, the trees, the prairies, and every creature that calls Jewel Cave home.