This summer I will be using G.I.S. and a GPS to map, and create a story map for Witness Trees in the National Capital Region. What are Witness Trees? A Witness Tree by definition is a tree that is associated with an important historic figure or event, biological components, a tree with a remarkable age, exceptional or unusual size, and disease resistance. The trees come in a big variety and are very diverse: large and small, old and young, extremely rare or a fairly common species, planted by a famous historic person or naturally established, and are memorials to both life and death. 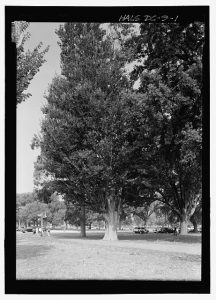 One of the first Witness Trees surveyed: Botanic Garden Elm at Union Square

During the summer of 2006 the Historic American Landscapes Survey (HALS) began one of the largest projects of its organization . The project was conducted in coordination with the National Capital Region of the National Park Service, the pilot project of the Witness Tree Protection Program aimed to identify and document twenty-four historically and biologically significant trees in the greater Washington, D.C. metropolitan area.

Using data collected I will create a mapping layer of the HALS trees.  Also I will develop a mapping layer depicting other significant trees that were not included in the HALS qualification process, but are  significant historical/biological trees. The result will be a public story map using G.I.S., of Witness trees in the National Capital Region that will be used as an tool to give a link between a natural resource and a part of history. I feel as though a versatile tool like this can lead to better care of the environment not only from environmental stewards but now the rest of the public who never had interest in the conservation of natural resources by ties to very important moments and people in history.

It`s only been two weeks but we have been highly productive pertaining to the project. Since the start of the project in 2006 more Witness Trees have been found, but I started from the first Witness Trees already surveyed by HALS. This was due to the HALS pictures and information about these trees being outdated being that the project itself is 12 years old now. Apart of what I do and most likely the hardest part of the field work I do, is examining the old pictures and use context clues in the description given to find the tree. These trees are usually located along trails or are close to certain historic figures or monuments but may be surrounded by other trees of the same species making it hard to determine which is which. Once the tree is found, I then use my Tremble unit to input data such as the Diameter at Breast Height (DBH) which I use DBH measuring tape for, tree condition (Dead, Alive, Is it a hazard?) and the HALS number to keep tract of which tree it is. 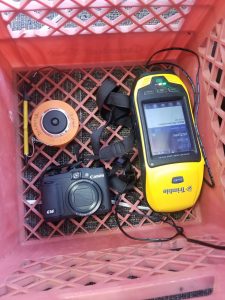 After this is done and conducted we move to my favorite part of the field process taking the picture! However these pictures should be taken in the same angle as the picture provided (If provided or physically possible). In the past week in a half I have found and photoed 15 Witness Trees and below are some of my favorite trees so far. We have many more to go so stay tuned!!! 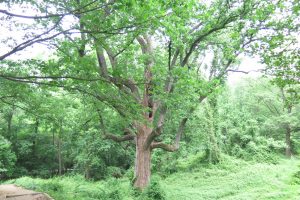 Tuplar Poplar in Montrose Park may be older than 200 years old! 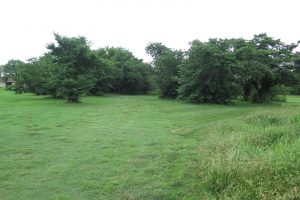