So What’s The News? 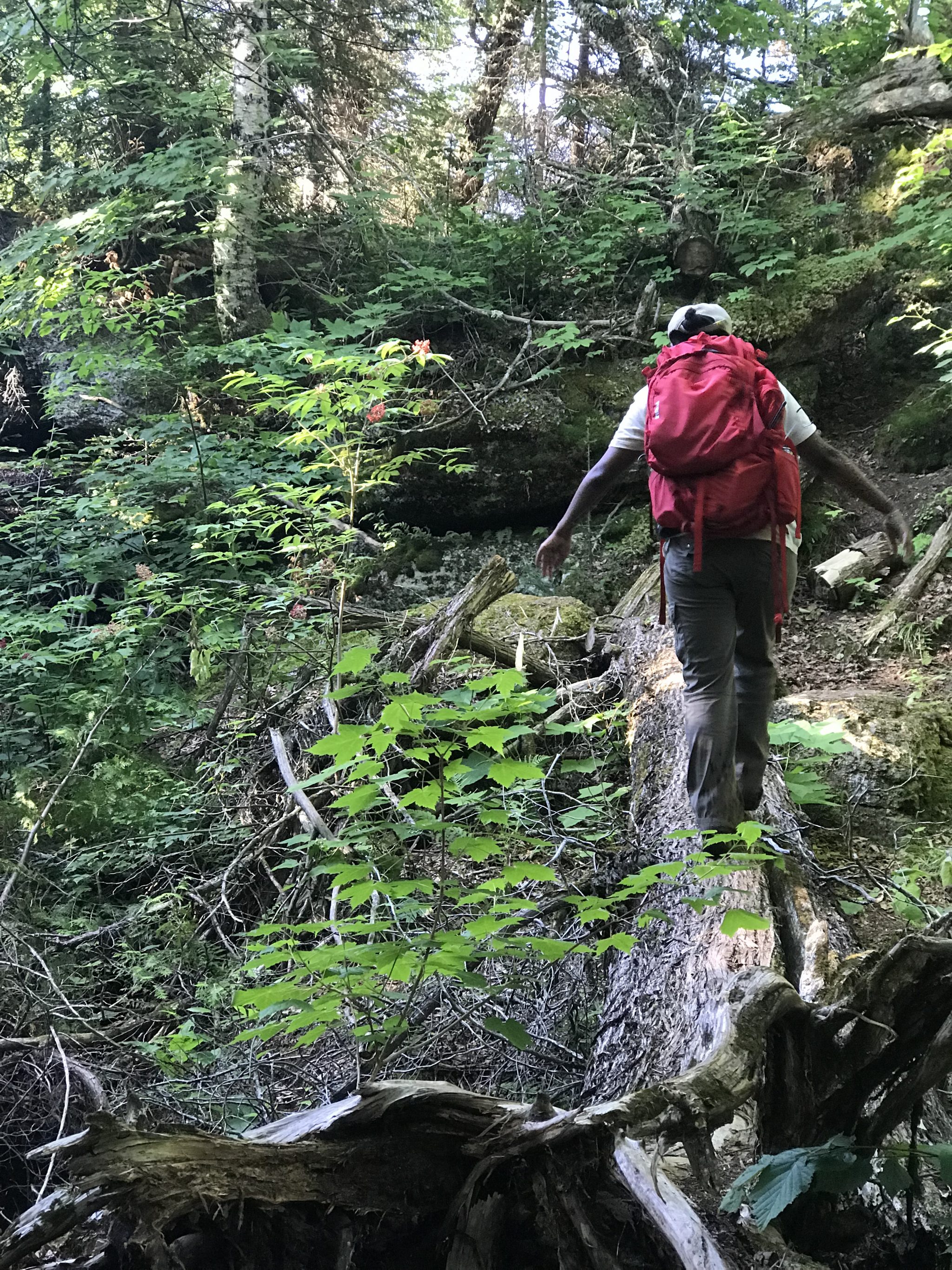 The overall purpose for this project was to get started on a 5+ year plan to predict how moose herbivory impacts vegetation on Isle Royale. As stated in a previous blog because of the limited amount of wolves currently on the island the population cannot be controlled leading to strongly influenced changes in the vegetation due to browsing. Although moose are not the only herbivores on the island they are the creatures with the largest herbivory impact. Since our studies are based on surveys instead of experiments we do not have the typical “results”  that one thinks about when sharing their findings. What we do have is information on what is typically browsed, problems we encountered and areas that are least and most susceptible to vegetation changes.

In collecting our date we found that moose are pretty impartial to what they munch on but they do have a few favorites. Our data collection was broken down into 4 parts, trees, saplings, shrubs, herbaceous seedlings. 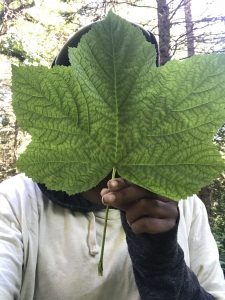 Rubus Parviflorus is known around here as thimbleberry! Abundant on the island not really munched on by moose.

When surveying the trees on we found that Abies balsamea, commonly known as the Balsam fir, is one of their favorite things to nibble on. On numerous occasions we counted saplings that were barely above 0.5 meters and that had an Assorted Browse Index of 3, meaning that the browse had impacted the vegetation so much that it was stuck at a certain growth stage or otherwise very altered. Another favorite seems to be anything in the Acer or maple family. Large maple forests only occupy certain portions of the island but Acer spicatum and Acer rubrum saplings seem to pop up on most trails on the island excluding ridges and rocky shorelines. For the shrub species, Corylus cornuta or Beaked hazelnut and Taxus canadensis commonly known as Canada yew are things that we always see a large number of moose bites on. Canada yew specifically is not surviving well on parts of the island that are frequented by moose and we are sure to keep an eye on the growth of the yew shrubs that are in our moose exclosures.

There were a few unexpected challenges we ran into while in the field. When the researcher who created the protocol and his team came down to teach us the standard operating procedures our combined teams were large and we were able to get around 4 trails done in a 5 day work period. I got used to that pace forgetting that our office group is small and soon realized that the way we approached the trails and how fast we did them would be different. Working with a group of 4 essentially made doing each transect twice as long especially if there were a lot of shrubs and saplings to count. Some days we would only be able to do 2 transects if the bush was dense and our base camp was far. The SOP and survey layout is designed so that you can end each day at a campground after finishing all of the transects on a trail but often times when working with a smaller group backcountry camping and base camping seemed to work best. Another thing we had to factor in was the weather. The island was hit with a series of storms that made counting the vegetation and just working on the trail, in general, a bit rough. Counting wet plants is not fun and the wetness can also change the height of some of the saplings and shrubs and it can make visual identification a bit more difficult.

Moose on the island do have  “high traffic” areas. Around certain campgrounds and along certain trails it looks as if someone went through with a waist-high weed hacker and took the leaves off of everything. 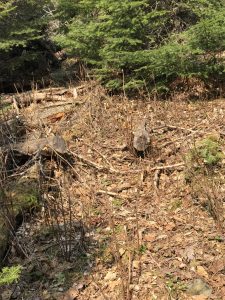 An area showing a clear path of where a moose had a feast.

Alternatively, you may see a group of trees standing tall and proud and just underneath them you may see a group of smaller trees that seem to be stuck at a height between tree and sapling, right around moose shoulder height. Even though moose do swim and can be seen crossing the channel between the islands they do not swim to the outer islands. Passage Island, currently untouched by moose browse is like a place frozen in time, home to an abundance of plants that are otherwise struggling on the main island.

Starting these baseline surveys will provide insightful information in terms of the future of the island’s vegetation. Moving forward with the wolf project we can now see if adding more predators into the ecosystem will alter the herbivory damage currently being done. Since the study is in its first years everything seems as if we’re in a race against time but as years pass and survey frequencies decrease this study will be major in giving researchers an insight into moose herbivory monitoring.