The Fault in our Caves 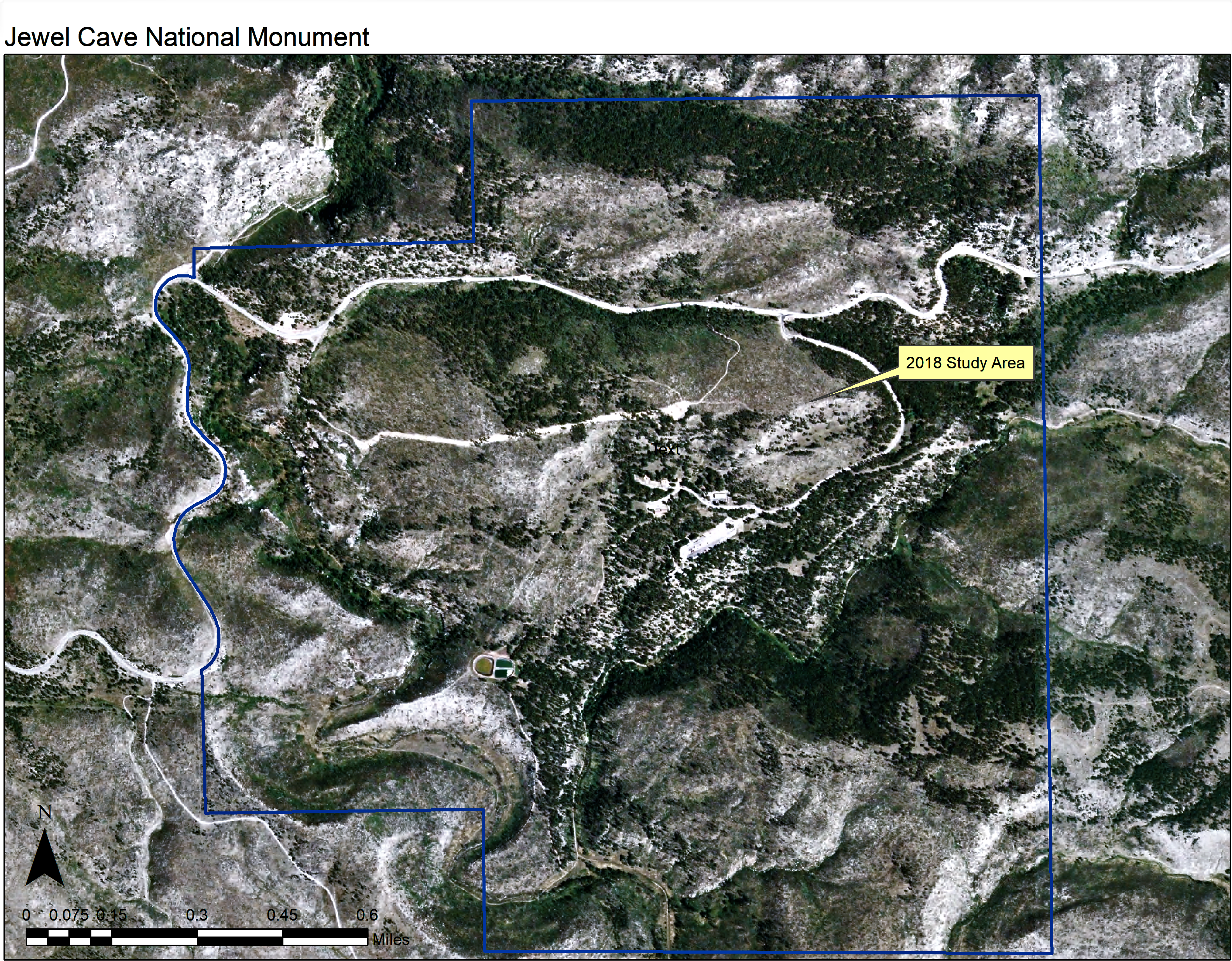 30 Jul The Fault in our Caves

I’ve had a blast this summer at Jewel Cave. I’ve done so many cool things in such a short time! Although I didn’t answer every question I had about this place, I know my efforts will help the park solve them in the coming years. I’m sure you’re curious to know what I HAVE come up with.

I remapped contact points of a whole hillside above the cave and compared it to the state survey from 2009. Minus a few discrepancies, our maps were nearly identical. Mike was hoping that we’d see a dipping plane, but the higher rock units that are found at lower elevations are most likely caused by erosion. We didn’t see any real beds, only cobbles and slumped boulders. Mike isn’t fully convinced by my assessment, but until seismic studies and LIDAR mapping is conducted, this is the best information we have. 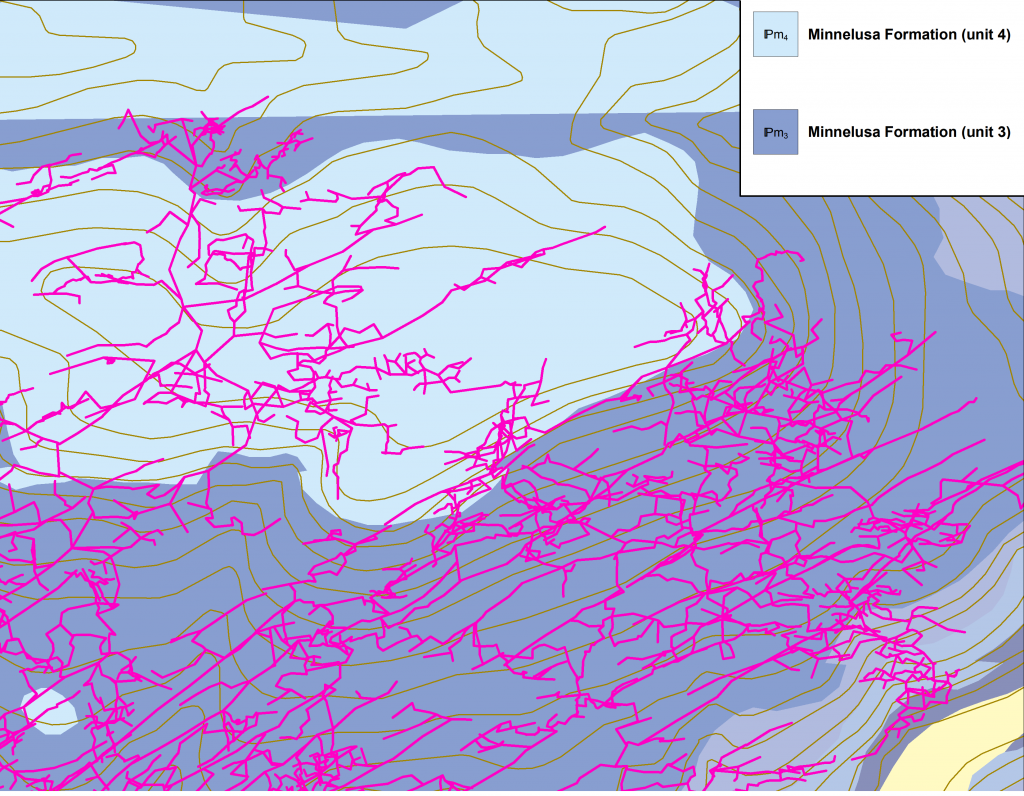 A section of a geologic quadrangle map of Jewel Cave made by Brian Fagnan in 2009. I’ve overlain cave passages in purple. I made my own map charting the contacts between subunits 3 and 4 of the Minnelusa Formation and it matched up with this map almost perfectly.

As for what we’ve seen in the cave, we found some dipping beds! We couldn’t use a Brunton compass, because it was impossible to reach some beds. Our solution? Using a Disto X3 survey remote. This remote uses a laser to give the azimuth, inclination, distance of a point. By shooting three points on a surface, we could geometrically recreate a triangular plane in the same orientation of the bed and calculate the maximum dip, its direction, and the strike. This was a very tedious process, so we created a program where we could input values and it would give us dip/strike values. Unfortunately, the dips and strikes of dipping beds did not correlate with the surface, so at this time we cannot relate the surface and subsurface. That being said, we cannot completely disprove the existence of micro-faulting. There are passages in this area that are extremely broken down, more-so than normal. 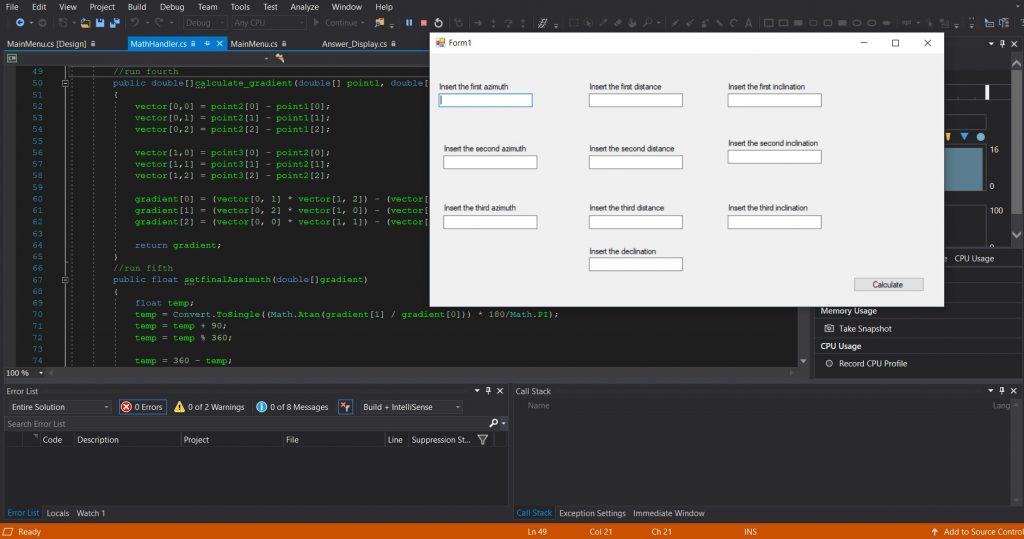 The custom-built Visual Studios program that measures the maximum dip, its direction and the corresponding strike. It’s much faster than doing all the math for every dipping surface.

Because we can’t make any real conclusions about these subtle features, the best course of action at this point would to obtain high-resolution LIDAR mapping and seismic studies to be conducted. That’s all the geology-related work I’ve done. The other work I’ve been involved with is bat monitoring, cave maintenance, cave photo-monitoring, vegetation surveying with I&M, a storm drainage project, resource stewardship strategy (RSS) meetings, and a future quartzite clast analysis. 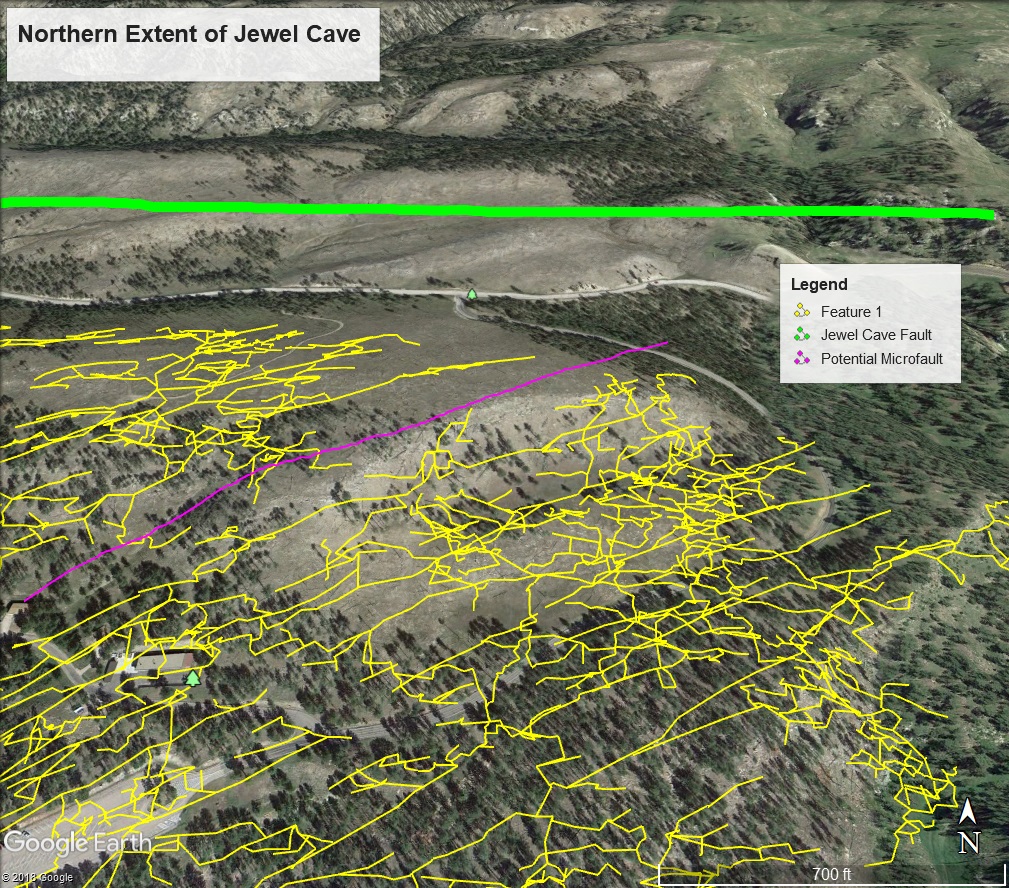 A Google Earth image of the study area with cave passages overlain in yellow. The theoretical microfault or monocline axis is lined in purple. The extinct Jewel Cave fault runs east-west and is marked with a green line.

I’m most excited for the clast analysis. Mike has some theories on the Black Hills and has found scattered quartzite boulders that have an unexplained origin. I’ve collected a few samples and when I return home, I will process them into thin sections, analyze them, and send him a report on my findings. I wish I had more time here, and although my internship is over, I’m happy that I can still be productive to the park’s research when I return home.