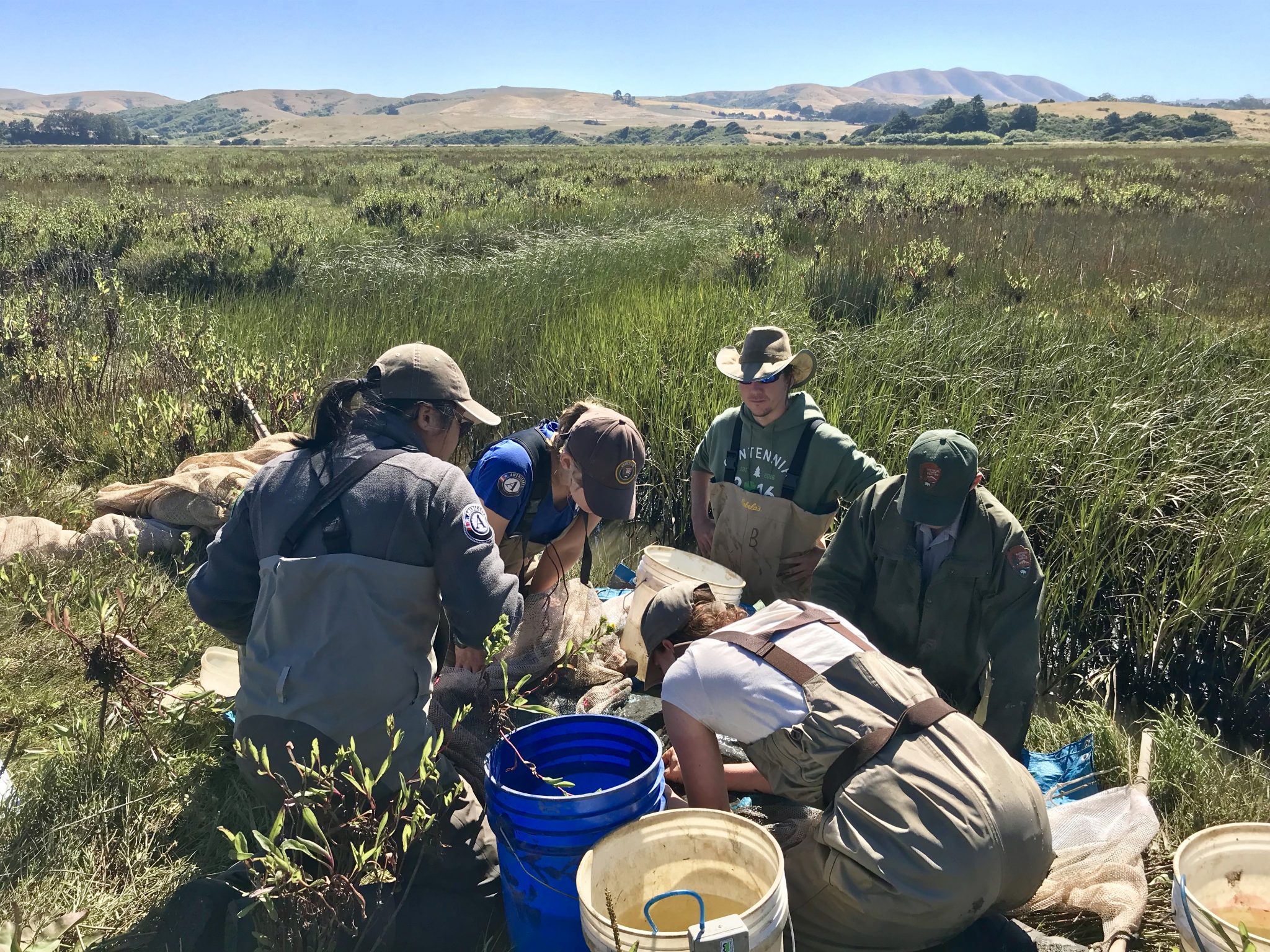 In last week’s blog I talked about a couple different survey techniques that the Fisheries Crew and I had been using while out in the field. I mentioned that we were (at the time) working on a project referred to as “Giacomini Sampling”. This sampling project was part of the 10th anniversary survey of the Giacomini Wetlands Restoration Project, marking one decade since the wetlands were restored.

The Fisheries Crew and I have since completed our sampling surveys for this year, but I’d like to dedicate this week’s blog to explaining more about this project, its importance, and the implications to both the environment and the community! 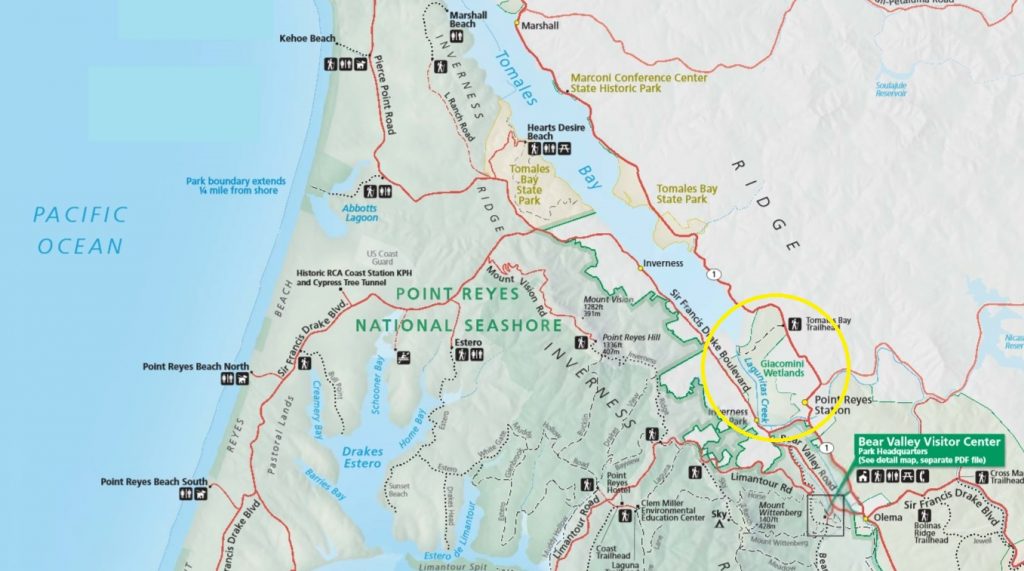 A BRIEF HISTORY OF THE GIACOMINI WETLANDS RESTORATION PROJECT

GOAL: to restore the natural hydrologic and ecological processes/functions of the wetlands and increase the sustainability of the ecosystems so that they can operate within present-day watershed conditions. 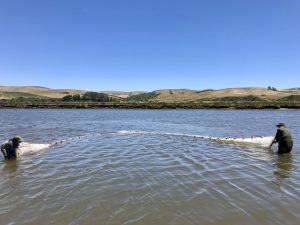 Priscilla Sisommout (left) and Michael Reichmuth (right) seining at one of the survey sights; Photo by Katlyn Fuentes.

Though the bulk of the restoration project might be over, the work isn’t done yet! Further monitoring, like the sampling the Fisheries Crew and I just completed, is necessary to ensure that both plants and animals are returning to the wetlands. Point Reyes National Seashore and the Point Reyes National Seashore Association will continue  fundraising to expand current restoration work within the marshlands. Additionally, the active eradication of invasive plants and the subsequent revegetation of the area will be necessary until all invasive species have been removed from the area.

SOME OF THE FISHES THAT WE OBSERVED DURING OUR SURVEYS: (*endangered; **invasive) 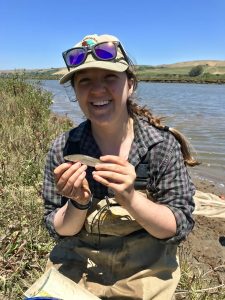 Myself with a topsmelt (Atherinops affinis); Photo by Adelaide Robinson. 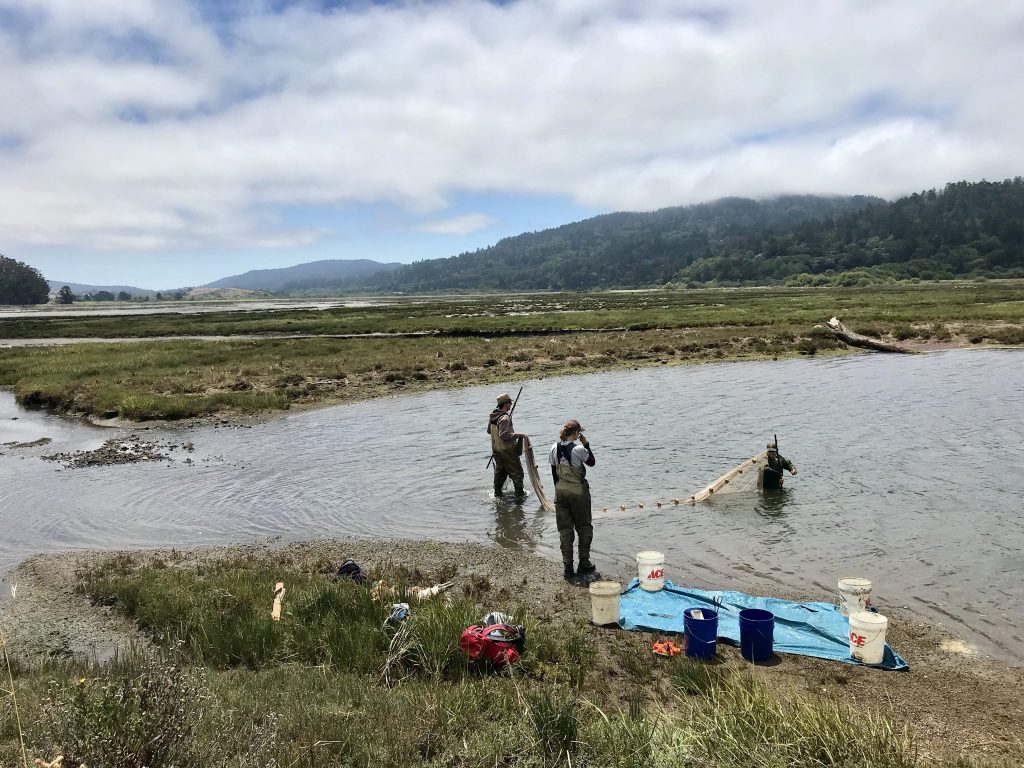 Conducting seining surveys at one of the sites within the restoration area; from left to right: Brentley McNeill, Adelaide Robinson, & Michael Reichmuth; photo by Katlyn Fuentes

WHY THIS PROJECT MATTERS

Despite the ecosystem benefits of reverting these pastures back to wetlands, there are (understandably) members of the community who mourn the loss of the dairy farm – a family-run business once considered to be a source of pride for many within Marin County. And while it’s ok to reminisce in the nostalgia of local history, it’s important to realize that this restoration project will continue benefit both the environment and the community for generations to come.

BENEFITS TO THE RESTORATION 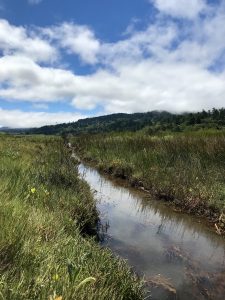 IMPLICATIONS TO THE ENVIRONMENT AND THE COMMUNITY

Though the current state of these wetlands varies from those of the 1860’s, this region of the estuary – the “transitional zone” – will continue to naturally shift over time as it adapts to our changing climate and the current watershed. And as one of the largest restoration projects ever attempted in recent history, the culmination of years of hard work and dedication are a sight to behold. This momentous feat has restored over 550 acres of pasturelands back to wetlands – an area encompassing more than 50% of the total expanse of Tomales Bay wetlands. This move is critically important for federally endangered species (like coho salmon), who once used the marshes as habitat and now have the opportunity to return.

All of this has been made possible and will continue to be made possible by the work of many dedicated individuals within the National Parks Service, the Point Reyes National Seashore Association, and a plethora of volunteers from the community! If you would like to get involved with restoration and conservation efforts in the future, I urge you to consider contacting your local national or state park and see what opportunities they have to offer!

In the coming months, I’ll be delving more into the ecological benefits of this restoration project as I begin researching and comparing the survey data collected this year to those of previous years. Not only are we hoping to see a continuation of the increase in species diversity and abundance, but also an increase in water quality as well!

If you have any questions or comments for me regarding this project or other work that we’re doing here at Point Reyes National Seashore, feel free to leave me a message in the comment box below.

For more information on the project and the upcoming anniversary celebration, check out the links below: