Where the waters run dry 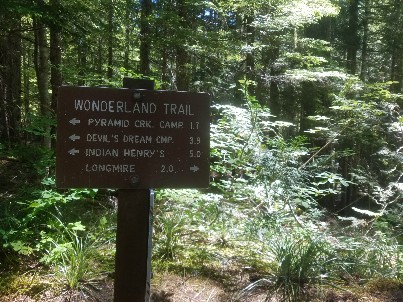 25 Jul Where the waters run dry

It was a beautiful, clear and sunny day for a day hike. I set my sights on reaching Indian Henry’s Hunting Ground with hopes to summit Pyramid Peak. My route was the Wonderland Trail. Total distance: an estimated 7-miles one-way (14 mi. round-trip).

After an estimated two miles traveling across Rampart Ridge (an old lava flow from Mt. Rainier), I reached a valley with a beautiful vista of Mount Rainier. Losing sight of the trail, I kept my eyes on the mountain and was led up the old riverbed of Kautz Creek. 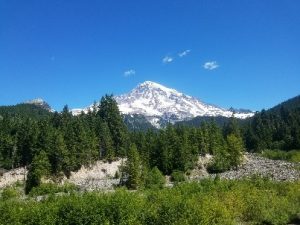 Mount Rainier’s beauty captures you and lures you in. 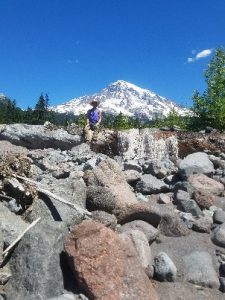 Self-portrait in the old riverbed of Kautz Creek.

The riverbed sucked me in as if I were water and it was longing to be quenched more than the small tributaries that traveled through it could. One and a half miles later up the valley, I decided to rest, take in the sights, and have my pre-lunch snack: a peanut butter and jelly sandwich. During this time of reflection, I thought to myself “This is an unusual trail for the Wonderland. I should check my GPS to be sure I’m not far off track.”

And as the exploratory nature of myself would have it, I had veered off the trail a good one and a half miles. The Wonderland Trail crosses Kautz Creek. It doesn’t go up Kautz Creek. At all. So I began back tracking to find access to the Wonderland.

A mile back with the sun blazing overhead in the afternoon, I encountered a garden of about seven balanced rocks. I decided to make this a stop to relax, reflect, and contribute my own artistry to the beauty. After completing my balanced rocks, I gazed up and saw what looked like a trail.

I leapt up and left my belongings to inspect it further. A quarter-mile up after hasty investigations, I realized I found the Wonderland Trail. Eureka! I was back on track! I went back to the garden, grabbed my pack, and continued on my adventure towards Indian Henry’s Hunting Ground, thankful I did not need to continue my backpedal. 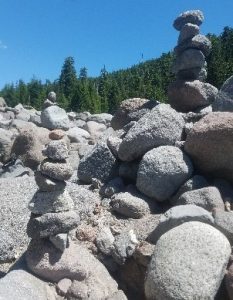