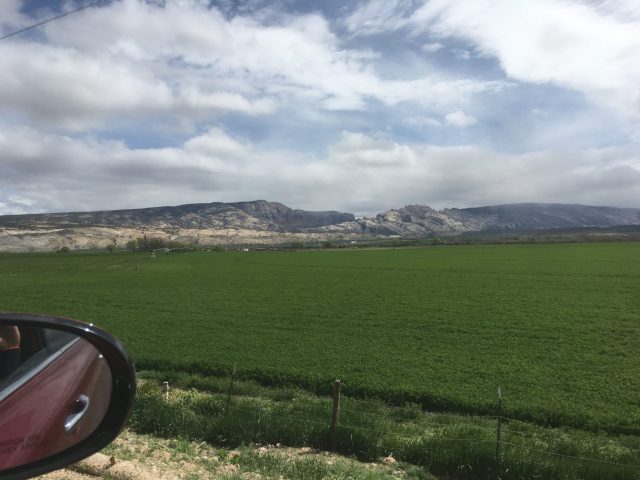 20 May Dinosaur National Monument: The Prequel

Hi there! My name’s Tut, and I’m serving as the Mosaics in Science Paleontology Assistant at Dinosaur National Monument in Jensen, Utah this summer. My position doesn’t begin until June, but earlier this month, I had the opportunity to accompany Dr. Mathew Wedel, an expert on sauropods–the gigantic, plant-eating dinosaurs like Brontosaurus–and human anatomy at Western University of Health Sciences in Pomona, CA, in order to return research specimens to a number of museums across the northern Colorado Plateau. We witnessed several impressive public exhibits and shelves upon shelves of bones at these institutions, but truly, the apex of our excursion was our visit to DNM.

This was my very first time getting a taste of the wonders of the park. DNM spans both Utah and Colorado and sits on a portion of the Green River, and while its headquarters are stationed in Dinosaur, Colorado, the main paleontological attractions–namely, the Carnegie Quarry and Visitor Center–are in Jensen. Upon reaching the park entrance, I was immediately struck by the Monument’s idyllic view. Massive blocks of Jurassic and Paleozoic-age rocks jut up in high relief against the sky as the Green River flows beneath them. The sky was cloudy that morning, allowing broken shafts of sunlight to contrast the pastel-colored sandstones against an otherwise shadowed background. Although I’m certain I’ll be swamped by hordes of parasitic bugs spawning from the river’s edges while the unrelenting Utah sun beats down on my untested west-coast skin, I doubt such peeves will serve to dampen the visual beauty of this place.

Matt and I were led into the Quarry Exhibit Hall by Park Paleontologist–and my internship supervisor–ReBecca Hunt-Foster, along with her husband John Foster, both titans in the Utah paleontology community. The Exhibit Hall contains a few interpretation pieces that highlight the history of Dinosaur and some of its significant finds, but its most obvious and important feature is the wall of bones, which was left undisturbed from the 1990s onward in order to allow the public to observe the remaining fossils essentially as they had been buried.

Matt wanted to record measurements of some of the sauropod bones embedded in the wall, so John was charged with guiding him and me up. Unfortunately, ReBecca was dealing with a back injury from prior work and could not accompany us, but would indicate points of interest from below. This arrangement allowed for some confusion on the part of a handful of visitors: as the three of us scaled the wall’s lower scaffolds, some diligent and good-hearted citizens on the upper observation deck yelled at us to get down! They must have assumed that we were thrill-seeking vandals (and as you can see in the last photo, we weren’t exactly dressed like the Indiana Jones stereotype). Thankfully, ReBecca was able to assuage the patrons quickly by clarifying that John, Matt, and I were researchers, and they quickly apologized. I’d like to think that this was both a funny situation and a great teachable moment–these people were in just the right time and place to witness science in action! Moreover, it is quite heartening to know that people care enough to speak up when they see something wrong, and it’s great that I experienced this now so it’s not startling if this happens again this summer.

After the commotion died down, John, Matt, and I were able to navigate freely. If you haven’t guessed this already, there are a lot of bones to see, on the order of 1,500, according to the DNM website. I was overwhelmed with the vast abundance of animals and animal parts represented by the fossils in the quarry–a juvenile Allosaurus leg here, a complete neck of Diplodocus over there, some Stegosaurus back plates over yonder, just above the articulated Camarasaurus foot. Each time my eyes passed over an area I thought I understood, I would see something different and new. ReBecca and the other park staff said that they experience the same when they work here. I will only become more familiar with the features of the wall as my work unfolds.

This was a most splendid few hours, chock-full of the wonder and joy of paleontology and enlightening discussions on the dinosaurs preserved at this astounding site and the science of understanding their world. I’m immensely excited to get back out there and start work, even though I won’t be spending the majority of my time in the Quarry Exhibit Hall–I’ll actually be dealing with specimens from behind the scenes, helping ReBecca properly house and care for them. My return trip to Dinosaur couldn’t possibly come soon enough.