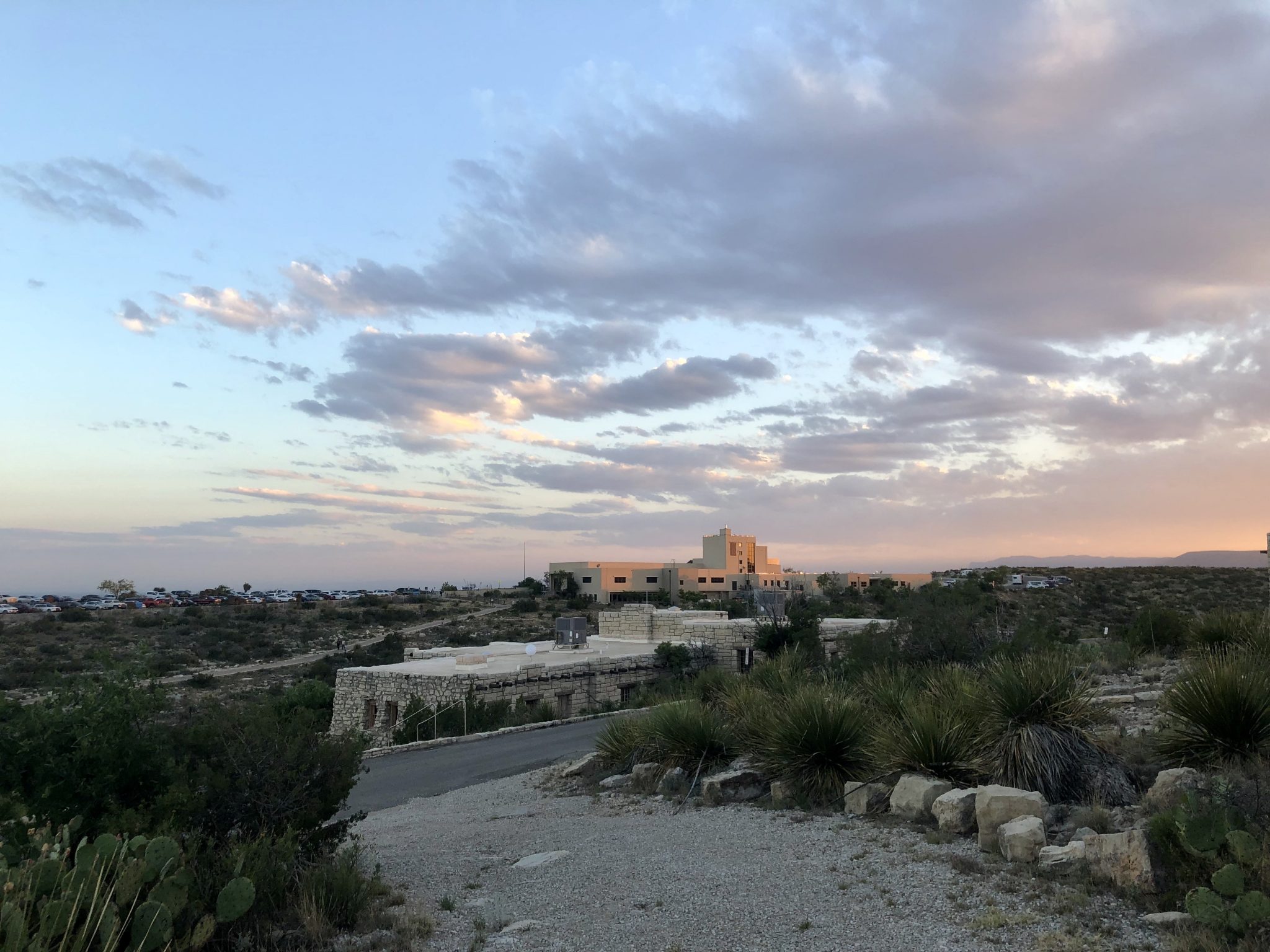 29 May Living at Carlsbad Caverns

About Carlsbad. Carlsbad Caverns National Park is in the Guadalupe Mountains in southeastern New Mexico, very near the border between Texas and Mexico. The land here was once an ocean reef during the Permian period (over 230 million years ago) and over geologic time was buried, fossilized, and then lifted up to form the Guadalupe Mountains. Carlsbad Cavern sits in a portion of limestone called the Permian Age Capitan Reef. Carlsbad Caverns is the primary attraction, a show cave with beautiful and unique speleothems, and is formed by the distinctive process of sulfuric acid dissolution (acid rising) compared to most other caves in the world of hypogenic genesis formed by water flowing. Sulfuric acid (think battery acid) can dissolve limestone much faster than carbonic acid (think soda) from water, hence the spacious cavities inside Carlsbad. Once the sulfuric acid drains from these chambers, speleothem are formed by the slow drip of calcium carbonate-laden water seeping through the rock and leaving behind mineral deposits. The Big Room is one of the largest (8.2 acres of floor area)and the most easily accessible and well-decorated chambers in the US with a 750 ft elevator shaft going right down into the cave, alternatively there is the 1.25 mile hike from the natural entrance through the Main Corridor. The Big Room is self-guided with interpretative signs and audio guides available, and there are also several ranger-led tours of varying adventure levels into different parts of this cave as well as other caves in the park. Note: tours should be reserved in advance!

Historic Housing. After living in caves, wilderness, and what some might consider poor living conditions for the past three months, I didn’t have high standards or expectations for the housing provided by my internship. I was simply blown away by my housing, which was an actual house “on the hill”. It is a mix of the Pueblo Revival and New Mexican Territorial architectural styles, built in 1931 (88 years old!!) by the Civilian Conservation Corp (CCC) using limestone from the surrounding hillside and is a designated historic building. The “hill” is an area next to the Visitor Center and Carlsbad Cavern’s natural entrance where there are several historic buildings. I love my unbeatable three-minute walk of a commute, as well as the views of the Chihuahuan Desert from office windows and desert sunset from my porch. I also have a fully stocked kitchen, which is awesome, but I need to be careful because I still have an expedition-level appetite even though I’m not burning thousands of calories a day anymore.

First Stitches. Within the first few hours of my arrival, I managed to cut my hand badly while washing dishes. Please note: not caving! I have never had any kind of serious cut before, but as I looked into my own flesh at the base of my thumb for a few seconds before the blood started gushing, I knew I was going to need stitches. It is a complex issue having to do with cave conservation and historic building compliance, but not many people live on the hill. Thankfully, I had just been introduced to another hill resident, volunteer Hannah Gottschalk, and vaguely knew where she lived. With a dishtowel clutched to my right hand, I started banging frantically on doors until I found her and she quickly drove me to the ER where I got four stitches. While I was upset that I would not be able to cave for two weeks, I was very relieved that I had not done any serious damage to my thumb. ’Tis but a flesh wound.

Bat Flight. Another big attraction at Carlsbad Caverns is the bat flight, more specifically the evening flight of half a million Brazilian free-tailed bats that roost in the cavern from March to October to consume half their body weight in insects (thank you!!). Thanks to the ranger talks, I have learned so much about bats and have a new appreciation for these cave-dwelling creatures that have such significant impact on our lives. Bats are important pollinators and eat a significant number of pests thereby saving farmers billions on pesticides and improving the health of our crops by keeping them pesticide-free. The Brazilian free-tailed bats that roost in Carlsbad Cavern for half the year are a maternity colony; each female bat births one pup a year. Her milk is rich, ~20% fat, allowing the pup to grow quickly, and take flight in 6-8 weeks when they start their migration south. Given the positive impact of bats on humans, their slow birth rates, and the threats against bats, it is important that we do our best to protect them by not entering bat hibernaculums during hibernation, maternity roosts, and protecting them against White Nose Syndrome, which is a disease that has devastated bat populations over the past decade. Although I have been a caver for a few years now, I never had much interest in bats, but I must admit that the bat flight was easily the highlight of my first week at Carlsbad. I’ve thrown together a few words to try to describe this awe-inspiring experience.

Against a pale watercolor desert sunset

From the cave entrance

To form a fluid and steady stream

Meandering through the sky

A gust of wind disperses them

They recover their congruous form

A few rebels fly backwards and away

Towards the sky until there is no light

Chihuahuan Desert. I spent two days in my first week hiking in the Chihuahuan Desert to retrieve and place sound recorders to try to locate the threatened Mexican spotted owls. As I hiked through the mountainous desert, I could see enticing black voids spotting the limestone rock face and understood why the Guadalupe Mountains are often called “Swiss cheese”. There are over 120 known caves within the park’s boundaries. The Permian Age Capitan Reef is one of the best preserved and indeed, I could see fossils and evidence of its former subaqueous life in the rocks along the trail. With the proliferation of caves here, it offers scientists unique opportunities to view the reef from the inside as well. I was also very fascinated by the Chihuahuan Desert ecosystem, which have two taxa of bird and cacti listed as endangered or threatened, including the Mexican spotted owls that we were trying to locate and the Sneed pincushion cacti pictured below. I am not a plant person, but if you are, please identify the plants pictured in the comments below!