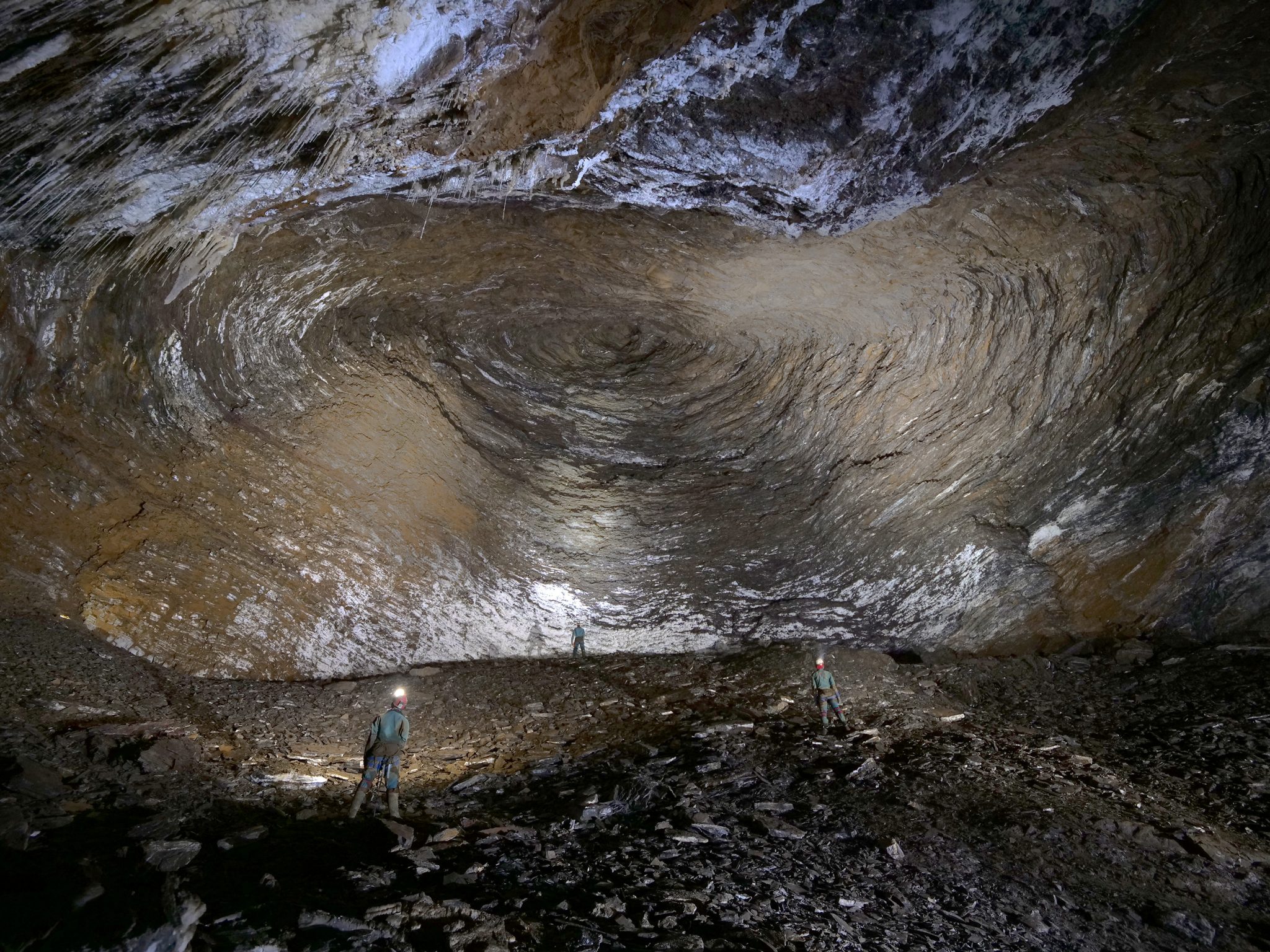 22 May Three Months of Caving

My name is Sonia Meyer. I grew up in Northern Virginia, just outside of Washington DC, but I’ve called Santa Clara, CA my home for the past year. Caving has been a great passion of mine for the past two years, particularly project caving and mapping. Project caving is different from recreational caving in that we have scientific goals—often producing a map of the cave. I have spent the past three months on three consecutive caving expeditions in China and Mexico, where I spent a cumulative of 830 hours underground—that is 43 days of caving and 32 nights spent underground. As if that wasn’t enough, I am excited to be spending the next three months at Carlsbad Caverns as the Mosaics in Science Intern where I’ll be working on the Visitor Experience and Resource Protection (VERP) Project. The Mosaics in Science internship program is administered by the Environment for the Americas (EFTA) in partnership with the National Park Service, and their goal is to increase the diversity of underrepresented persons in STEM fields by providing opportunities like this internship, which culminates in a weeklong career workshop. During the past three months, I learned inumerable lessons and had incredible experiences; I wanted to share one from each expedition that I think will be most applicable to the next three months.

The importance of cave conservation. I spent February 2019 in Guiyang and Wulong, China. I spent half the time visiting my Chinese relatives, half the time participating on the two-week long Hongmeigui expedition to Luoshuikong, and the whole time gorging on delicious and spicy Chinese food. Side note: food is my secondary passion, particularly Asian food, and I very biasedly believe that Chinese cuisine is the greatest and perhaps most underappreciated in Western culture. This expedition was my first real introduction to cave conservation practices. Prior to this, I had never been in such a pristine and untouched cave—every step we took left a mark and I was extremely mindful of the impact I had on the cave environment. In active stream passages, we did not worry as much because during the rainy season, the water would naturally rise and wash everything away, so we could walk freely. However, in passages that had been sitting dry for years, decades, centuries, or more, we marked careful paths with flagging tape so that each explorer walked on the same path thereby reducing our impact to the bare minimum.

One day, we were surveying going borehole (meaning continuing large passage) and we came across a section of cave where the ceiling was lower, just above the height of an average adult, and completely covered in gypsum flowers and other formations. Gypsum is a mineral commonly found in caves that often presents as white or translucent. Gypsum flowers are speleothems characterized by crystal petals radiating from a central point much like a flower. I was totally mesmerized having never seen a gypsum flower before to now see hundreds; all were just a few inches above my head so I could really take in the detail. Then we came upon a field of gypsum wool—also my first time seeing this type of formation—scattered all over the floor. Gypsum wool goes by many names, but they are a particularly delicate and fibrous form of gypsum that looks like wool, cotton, cotton candy, etc. When walking through this area, some wool began falling from the ceiling where it was congregated in clumps all over, and I thought it was quite a magical scene resembling falling snow. Only later did I learn that it was likely the heat from our bodies and/or wind from our movements that disturbed the wool causing it to fall, and this revelation made me realize just how easily we can impact cave environment without even knowing it! This is one of the reasons why education about cave conservation is crucial.

The thrill and beauty of exploration. For the month of March 2019, I spent my days in Sistema Cheve near Cuicatlan, Oaxaca, Mexico. A large-scale operation like this three-month long expedition is really a remarkable logistical feat that the leader, Bill Stone, likens to a military operation. It takes weeks to set up on site, so I felt a little guilty, but mostly thrilled when we made a big discovery on my first trip. Amy Cantrall Morton and I joined a team already stationed at Camp Stan in Peña Negra, a cave that was mapped and connected to Cheve just last year. On the first day, we followed Bill Stone to double check the terminus of Boomerang Borehole, a section of the cave. He explained to us that last year, the final room was pouring rain from the ceiling and therefore possible that it was not thoroughly pushed, and this year’s unusually dry weather may provide favorable conditions. Indeed, there were only a few drippy areas and indeed, we identified an easy dig through which you could see a promising void. Bill and I took turns digging while Amy checked other leads; we were able to enlarge the path just enough that I could slither through. On the other side, I reported, “It’s big, really big.” The first thing I noticed were the dazzling colors of the breakdown. Dazzle seems to indicate glitter, but I mean the richness of color in these rocks—the hues of deep purple, rusty orange, and earthy yellow—dazzled me, and instantly reminded me of a dish my mother makes—米粉肉 mifenrou—pork belly dipped in spiced rice flour steamed over a bed of sweet potato slices, and so I named the hall Sweet Potatoes. Clambering over and through huge pieces of breakdown with three promising divergent paths, I didn’t get very far in my allotted 10 minutes of scooping (exploring without mapping). I returned breathless and excited, and reported that we have going borehole—50 ft wide by 80 ft tall. As I squeezed back through this hole just barely larger than the size of my body, I was keenly aware that I was the first person that this section of cave has ever interacted with.

Days later, we returned with a larger team—Reilly Blackwell and I rigging and checking leads ahead, Bill sketching on Topodroid with Amy and Elliot Guerra-Blackmer on instruments. Bill declares this is not borehole. Disappointedly I ask, “Well then, what is borehole?” and he told me at least one kilometer of continuous passage. Throughout the rest of my expeditions, I came to realize that the highly-sought “borehole” is an extremely subjective and relative term. The large room appeared to end, but Reilly and I pushed and rigged two climbs that led us to a remarkable room of pristine white formations. The first feature I noticed actually was the rotunda in the ceiling, a pile of breakdown directly underneath where the ceiling had collapsed to form a dome of concentric rings. There were two columns, floor to ceiling. One was attached to a piece of breakdown, and as I climbed the pile, I was fully cognizant that a misstep could destabilize the steep slope and destroy the 12 ft tall column that took possibly tens of thousands of years to form. Needless to say, I was very careful. In addition to the two columns, the ceiling was covered in draperies of white stalactites that looked like dragon teeth. Reilly decided to name the room Aguardiente, which is a type of local moonshine, because it is a homonym for tooth water and the English slang translation is white lightning, the imagery of both resembled this formation room. Aguardiente also has medicinal properties as I learned one night when I was feverishly ill from contaminated water and a local woman rubbed cooling herbs and aguardiente all over my body, cooling my burning skin. The next day, I went into the town clinic reeking of liquor, and as they prepped my arm for an IV, I once again recognized the familiar sweet scent of aguardiente.

Exploration is exciting and thrilling, but also comes with the responsibility to protect the cave and its delicate and beautiful formations. Carlsbad Caverns and Lechuguilla, another cave on the park premises, have been explored to the lengths of 34 and 138 miles respectively, with Lechuguilla being the 8th longest caves in the world. Both are known for their incredible beauty and formations, and there are ongoing exploration projects that I hope to participate in.

The importance of mapping. I spent my third month on the Proyecto Espeleológico Sistema Huautla (PESH) expedition in Huautla, Oaxaca, Mexico. Nita Nashi (Nita means cave in the indigenous Mazatec language) was first and last explored in 1982, map drawn in 1998, and recently upon examination of line plot data, PESH leaders found that the terminus of exploration was merely 50 meters from Sistema Huautla’s La Grieta section. And so, one of the goals for PESH 2019 was to connect Nita Nashi to La Grieta. The initial team quickly learned not to trust the highly inaccurate map. For example, the Supai Room was drawn as a mere 15 m wide room, when in reality, it was at least 40 m wide and 45 m tall. It was certainly a pleasant surprise though for the exploration team so maybe there is some benefit to inaccurate mapping! Furthermore, it was extremely well decorated, but this was not indicated on the map. The Supai Room has a rotunda, much like Aguardiente, but so much larger, deeper, and grander. At the base of the breakdown pile is a cluster of crystalline soda straws over 6 ft long and the opposing wall is home to delicate gypsum flowers and helictites. A soda straw is a thin hollow speleothem formed by ceiling drips, while a helictite’s growth changes directions in either a curved or angular fashion often defying gravity. For these less commonly visited caves, inaccurate maps may have less consequence, but for Carlsbad Caverns, it is extremely important to have high quality maps so that the National Park Service can better manage its natural resources as well as for visitor maps and route planning among other reasons.

The importance of cave conservation, the thrill and beauty of exploration, and the importance of mapping are lessons and experiences that I think will be helpful for my upcoming internship. I am beyond grateful to have been selected for this opportunity and can’t wait to see what the next three months have in store for me. Most of my work will be doing impact mapping in cave, inventorying broken speleothems, photo monitoring, and other activities to measure human impact on the caves in the park, then producing impact maps in a GIS software. In a future blog post, I will explain more about the VERP project as well as provide updates about what I have been learning on site. I am eager to be working in a world class cave where I can learn from the best, but what I am most excited for is continuing to hone my cartography skills and getting real-world experience with GIS.