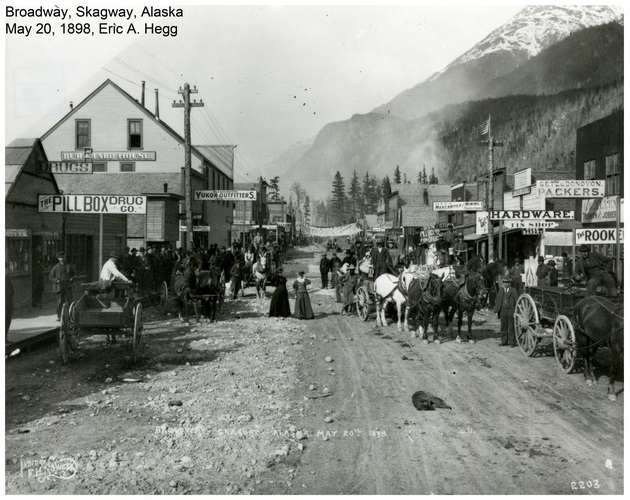 Hello from up north! Since my last couple blogs were dedicated to introducing myself and the area I just moved to, I thought that I would focus this week’s post on Klondike Gold Rush National Historical Park – where I’ll be working all summer!

Established on June 30, 1976, Klondike Gold Rush National Historical Park is approximately 13,191 acres comprised of National Park Service (federal), city, state, and private lands. While this park is the most visited National Park in the state of Alaska, this park is actually broken into four units across two states: the Skagway Historic District (in Skagway, AK –  where I’ll be all summer!), the White Pass Unit (AK), the Dyea-Chilkoot Trail Unit (AK), and the Klondike Gold Rush-Seattle Unit (in Seattle, WA)!

Now I don’t know about you, but prior to my coming to this park, I didn’t know anything about the Klondike Gold Rush other than it being an important event in American history. So this blog will serve as an “introductory lesson” describing what the Gold Rush was, and why it was important!

“If you must go to the Klondike country and cannot rest until you do, go by all means… but if you have any regard for your comfort, or perhaps for your life, or if you have any family ties, think twice before starting, and then think seriously again.”

A (VERY) BRIEF HISTORY OF THE KLONDIKE GOLD RUSH:

BACK THEN, A 1 OUNCE GOLD NUGGET COULD BUY:

–2 ½ weeks of pay for a factory worker

“We saw grown men sit and cry when they failed to beat the tide… a terrible blow to the strongest of men.”

Though over 120 years have passed since the end of the Klondike Gold Rush, its legacy is still persists! All of the departments at this National Park (including, but not limited to: Archaeologists, Biologists, Historians, Museum Technicians, and Interpreters) work collaboratively to preserve and protect this park and its history for generations to come.

As culture and environment go hand-in-hand, a big part of preserving this park also means devoting time and resources into surveying and monitoring ecosystem changes in the area! So throughout the rest of my blogs here on out, I’ll be discussing various projects that the Natural Resources department and I are conducting, to get a better look at what is exactly happening in this environment and what we can do to better protect it.

For more information on the Klondike Gold Rush, check out: