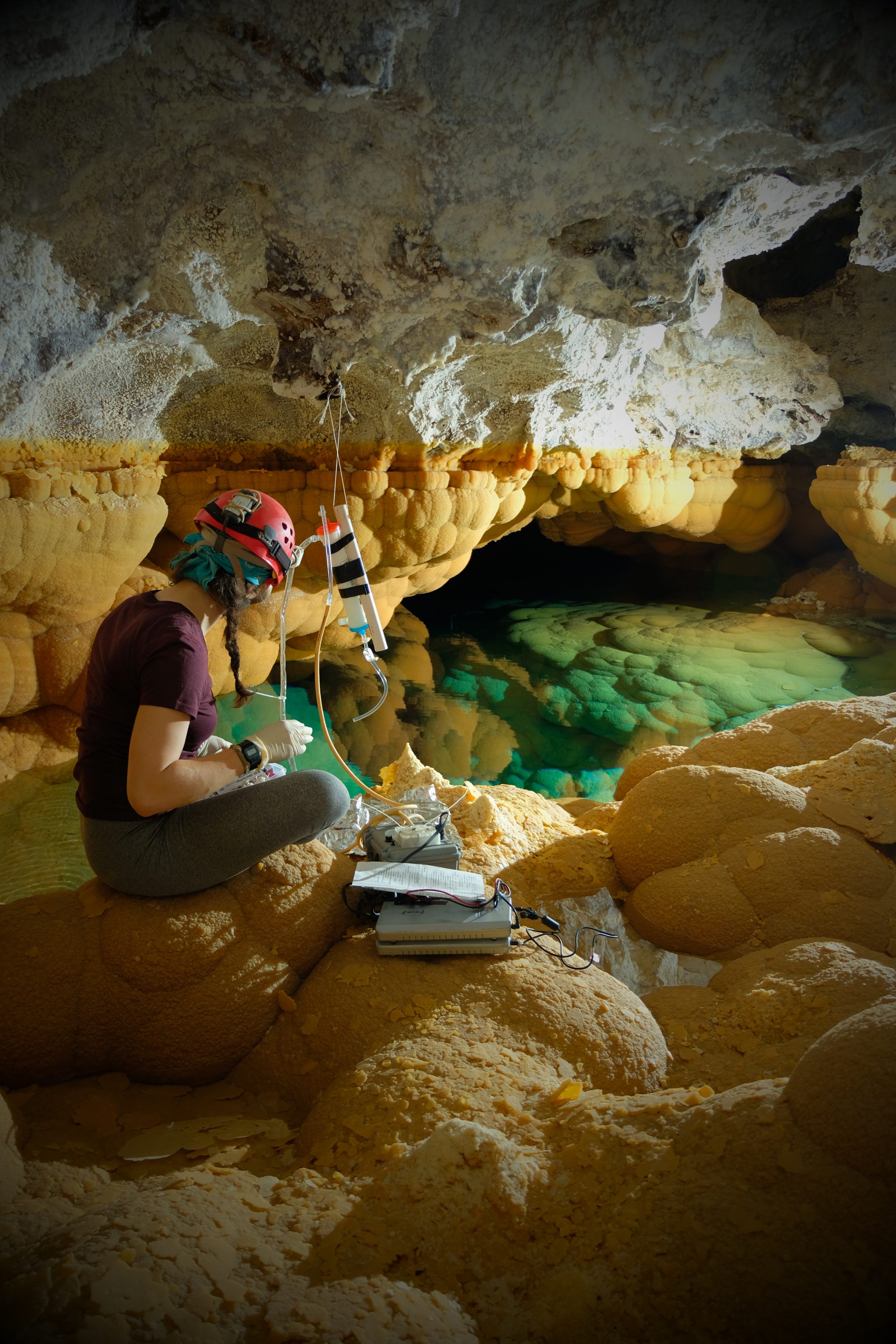 In the past week, I have had the pleasure of attending two fascinating talks here at Carlsbad Caverns National Park—Superbugs, Wonder Drugs, and Amazing Caves: Lechuguilla Cave and the future of antibiotic resistance by Katey Bender, graduate student of integrated bioscience at University of Akron in the Hazel Barton lab and Bats and White Nose Syndrome (WNS) by Debbie Buecher and Diana Northup. Both talks discussed how the seemingly inconsequential and misunderstood life-forms play significant roles in natural processes that affect our lives.

Lechuguilla—A Microbial Forest. Lechuguilla is considered the Holy Grail of caving, and is on my personal bucket list, because of its renowned beauty, scientific research value, and its pristine conditions due to its unique genesis and restricted access. For non-cavers, Lechuguilla Cave is part of Carlsbad Caverns National Park; it is the 2nd deepest cave in the US and the 8th longest cave in the world, so it is a significant cave. Fun fact: Lechuguilla is named after a Chihuahuan desert ecosystem native—Agave lechuguilla.

So why is Lechuguilla a microbial forest with great scientific research value? Due to its genesis through sulfuric acid dissolution (process explained here), Lechuguilla was formed in geologic isolation without any interference from the surface for over four million years. It was completely untouched until the entrance was dug open in 1986 by Colorado caver Dave Allured. To maintain its pristine condition and minimize the disruption of the natural cave environment by surface contaminants, its one and only entrance is sealed with an airlock and the National Park Service limits entry into the cave. While human entry does impact the cave, studies have shown that many human microbes cannot survive in the nutrient-starved environment of Lechuguilla.

From Katey Bender’s presentation, I learned about her research trying to find an antibiotic adjuvant in Lechuguilla which could be used to combat antibiotic-resistant super bugs. Due to its unusual genesis and maintained isolation from outside contaminants, there are microbes found only in Lechuguilla collected from sites where no humans have ever been. Antibiotics were a game changer in medicine when penicillin was discovered in 1928 by Nobel prize-winning scientist Alexander Fleming. Since then, several more antibiotics have been discovered, but in the past few decades, there has been a discovery void, and harmful bacteria are developing resistances to antibiotics and becoming “super bugs”. What causes bacteria to become resistant? Katey suggested not finishing antibiotic courses as prescribed by physician and the over prescription of antibiotics, so if you want to do your part, make sure you finished your antibiotic course! Adjuvant agents can disarm a bacteria’s resistance to antibiotics; a stopgap measure to preserve our already discovered antibiotics for a few more decades.

An Evening of Bat Netting. Dr. Debbie Buecher is a bat biologist with Buecher Biological Consulting and Dr. Diana Northup is a cave microbiologist conducting research at the University of New Mexico. From their presentation, I learned that White-nose syndrome (WNS) is spreading rapidly throughout the US and has been confirmed in Texas. WNS is caused by the cold-loving fungus Pseudogymnoascus destructans (Pd) growing on bats during hibernation when they are at their weakest and most vulnerable. It can eat through their wings and wakes them up during hibernation, which causes them to burn through their fat reserves and die of starvation. We are concerned about how WNS may affect Carlsbad’s bats and want to monitor for the presence of Pd. The researchers were scheduled to be here for a week setting up bat nets at different locations in the park and employees were given the volunteer opportunity to help with this research.

I was scheduled to assist with bat netting Thursday evening from 8 pm to 2 am at Rattlesnake Springs. That day, I went to ask Dr. Buecher’s husband a question related to my CO2 monitoring research. We talked for 20 minutes, and as I was about to leave, he asked me to wait, and started fiddling with his chest pocket. He pulls out a little brown bat (Myotis lucifugus). I couldn’t believe it was sitting quietly there the whole time we were talking! Then Dr. Buecher came over and opened the right side of her vest and pulled out Maggie, a Western mastiff bat (Eumops perotis) the largest bat species in North America, and let me hold her, but she wanted to go back to mama. Then Dr. Buecher opened the left side of her vest and pulled out a pallid bat (Antrozous pallidus). I was shocked she had another one on her, and she quipped, “What? You didn’t bring yours?” It was a delight to see these lovely creatures up close and to have held one too.

That evening, I learned about the bat netting process, and I’ll do my best to explain it here with photos to assist. We set up the bat nets just before sunset and began to wait. Two people, with pre-exposure rabies shots and bat handling experience, were manning the bat nets. When a bat was caught in the net, they would put the bat in a bag, and bring it over to us. Dr. Buecher and Dr. Northup sat across from each other so that Dr. Buecher could examine the bat while Dr. Northup took microbe samples from the bat. We got our first bat in a bag delivery around 9:30 pm.

Dr. Buecher begins examining the bat and rattles off identifying feature like gender, age, length of wings, length of ears, etc. while a volunteer transcribes her notes. Meanwhile, Dr. Northup is using a q-tip to swab and take microbe samples from the bat, and she also dictates her observations while a volunteer transcribes her notes. My job is to handle the biological samples. While they examine the bats, I label the samples. Dr. Northup breaks off the tip of the swab into a vial, which I pack in a sterile bag. This sample goes into a cold container full of dry ice. She takes another sample from the bat for Pd and breaks the tip of the swab into a test tube shaped vial full of dextrose yeast peptone broth. I shake this vial for 60 seconds, this agitation helps the Pd separate from other microbes that might kill it, and then I pour 1 mL into another vial, shake for 60 seconds, and pour 1 mL into the third and final vial. This process isolates the Pd, which will be analyzed in the lab to confirm whether or not this bat was carrying the fungi.