There are pollen slides collected from birds going back to 2014.  It’s slow work, but I’m planning to get through all the slides by the end of the summer.  Just to give you an idea of what I’m looking at, I took a picture of one of the bird pollen slides through the lens of the microscope at a 400x magnification. 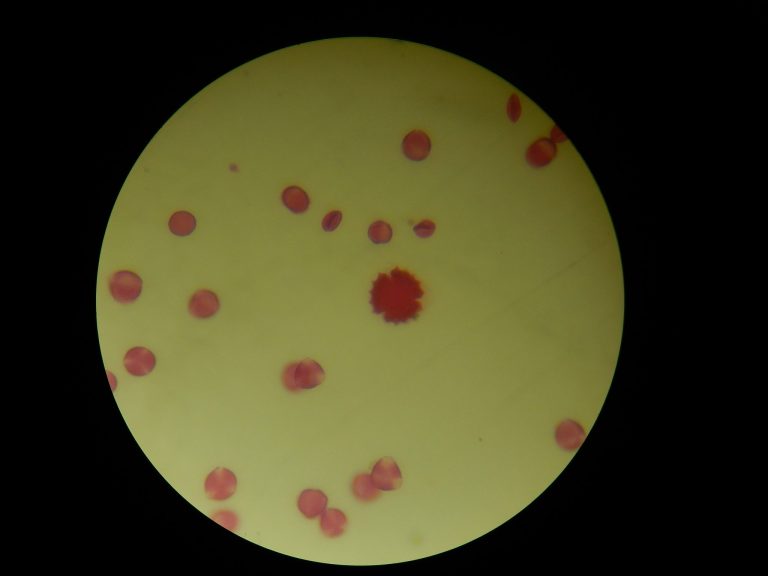 The spiky one in the middle is of the genus Cirsium, a thistle.  There’s one that looks sort of like a coffee bean at the Cirsium pollen grain’s 10 o’clock.  That one is of the genus Lupinus, a lovely wildflower that is typically purple, though it comes in other colors as well.  It’s hard to tell because taking a picture through a microscope can be difficult, but there are two other types of pollen in there.  They are Castilleja, commonly called Indian paintbrush, and Penstemon.   Both are wildflowers found in the area.  In order to classify pollen down to species, one would need an electron microscope to notice the minute differences of the ornamentation on the pollen.

Additionally this week, some coworkers and I travelled to Pecos National Historical Park in north-central New Mexico for some administrative work.  Pecos is the site of some archaeological remains of the Pecos people, a Native American group that was subjugated by Spanish conquistadors.  The most visible ruin is that of a mission church that was mostly destroyed during a revolt.  However, to me the most interesting ruins were what little remained of the original Pecos Pueblo, which provided insight into how the Pecos people lived.  Of course, the area provided stunning views as well along its historical trail.  If you’re curious about the site, you can learn more at https://www.nps.gov/peco/index.htm