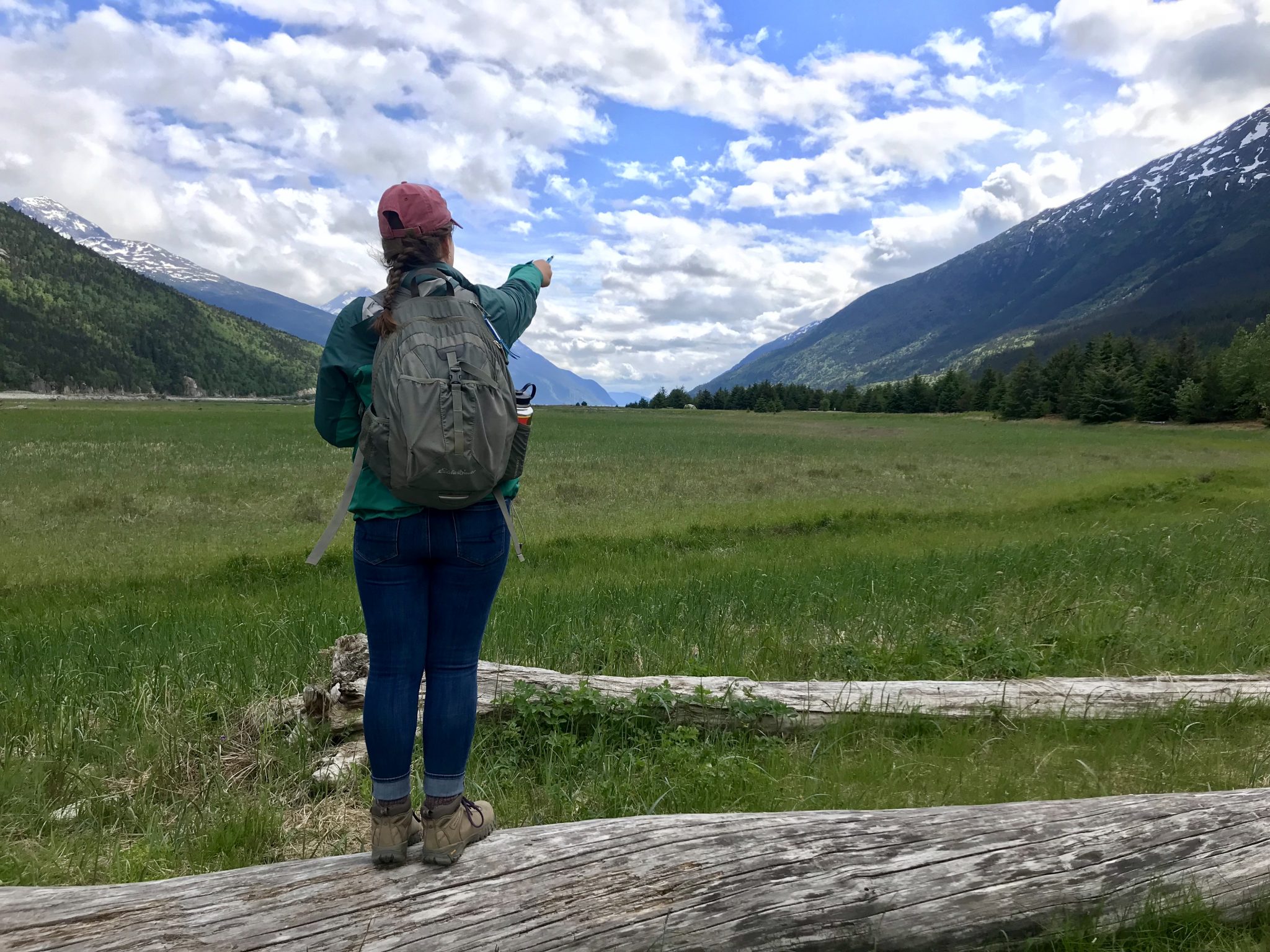 When I was preparing to move to Alaska for the summer, never did I think I would be able to use a childhood skill like “I Spy” in a professional capacity while out in the field. But during this past month at Klondike Gold Rush National Historical Park (KLGO), I’ve had the opportunity to put my childhood-cultivated “I Spy” skills to the test while collecting data for a variety of surveys for the Park’s Natural Resources Department. In fact, being able to spot elusive flora and fauna is the name of the game here at KLGO, especially when we’re out conducting Coastal Waterbird Monitoring!

The Coastal Waterbird Monitoring project was developed by KLGO in 2004 as a means to monitor the occurrence, distribution, abundance, and habitat association of birds in the area. This survey – conducted annually in spring, summer, and fall – covers an area consisting of eight units, spanning from the cruise ship docks, to the shores of Nahku Bay, and down to the mud flats in Dyea.

THE TYPE OF DATA THAT WE COLLECT ARE:

For those of you who aren’t biologists or fellow-bird-enthusiasts, you may be wondering “Why is this project so important?” Well, let me tell you!

Despite the relatively small size of this park, the unique climate and geography of the region surrounding and including Klondike Gold Rush National Historical Park makes this park one of the most biologically diverse areas in Alaska! Located in what’s called a “transition zone”, KLGO sits between two ecologically divergent geographic regions: the Northern Pacific Rainforest, and the Northwestern Interior Forest. These regions provide crucial habitat for birds, including several landbird species that rarely breed in the other coastal rainforests of Southeast Alaska.

SOME OF THE BIRDS WE’VE SEEN (Italics are scientific names):

By conducting this study every year, the Natural Resources team at KLGO are able to assess the general health of the various bird populations, as birds are important indicators of the overall ecosystem health amid ongoing environmental changes like climate change or development of new infrastructure.The data collected from these long-term monitoring and baseline inventories provide data that are used by the National Park Service (as well as other stakeholders) to make informed decisions for the purpose of maintaining and preserving these ecosystems – protecting them not only for the use of these animals, but also for present and future generations to visit and admire its beauty!

Despite being a Fisheries Biologist new to the “birding-game”, I am thoroughly enjoying learning more about these beautiful Alaskan birds, and my bird-knowledge continues to grow each and every day! My boss here at KLGO, Mary Hake (the acting Natural Resources Program Manager and a brilliant ornithologist to boot) is determined to convert me to the birder’s way-of-life by the time my internship here ends in August. Regardless of whether or not I end up leaving the world of ichthyology (fishes) for ornithology (birds), I’m eager to continue helping with the Coastal Waterbird Monitoring project, and I can hardly wait to see how much more I will learn over this next month and a half!

FOR MORE INFORMATION ON BIRDS, CHECK OUT THE FOLLOWING LINKS: