Give me liberty, or give me eight cents! 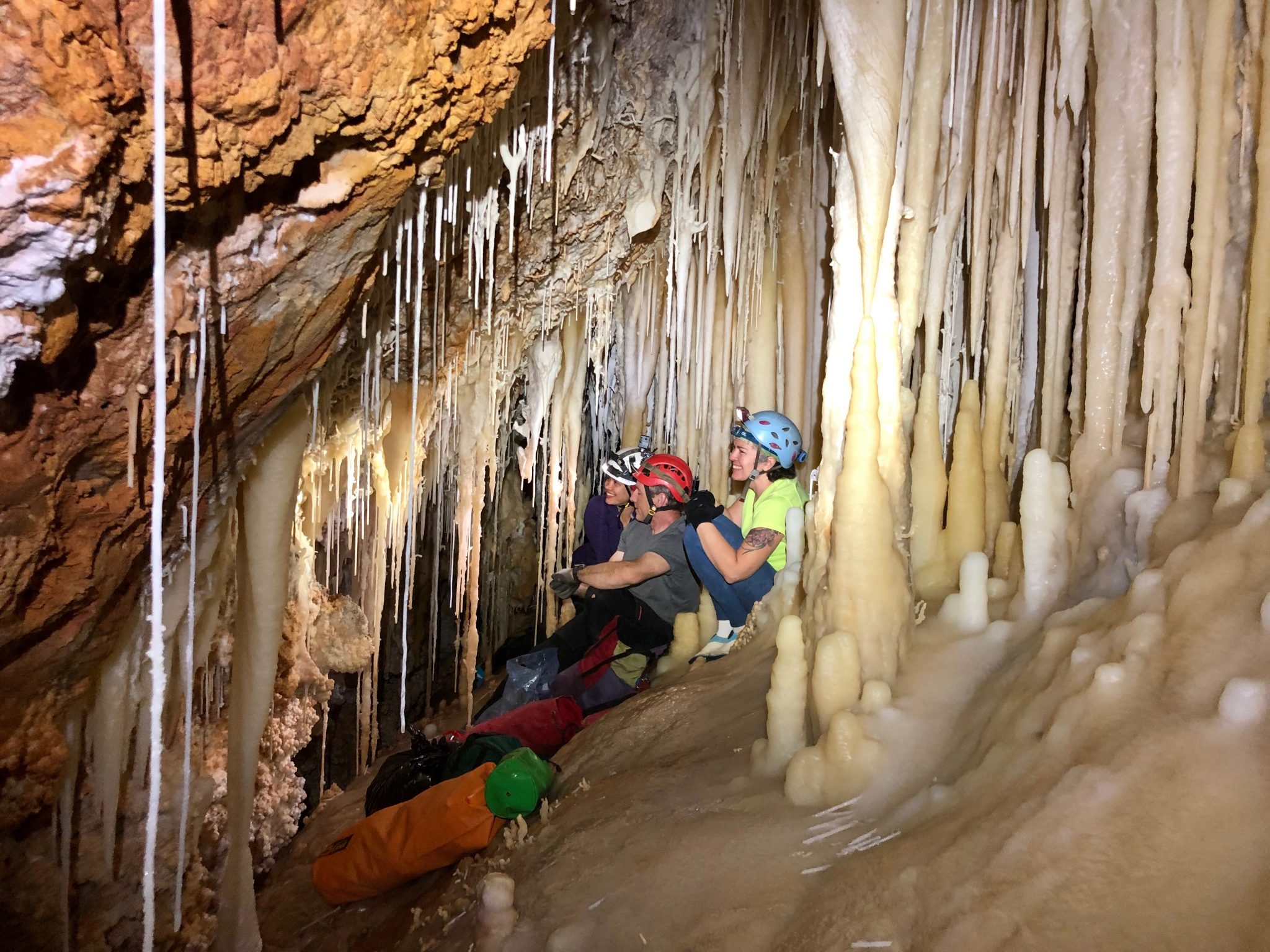 23 Jul Give me liberty, or give me eight cents!

Participating on Derek Bristol’s expedition in Carlsbad Cavern was a very special experience for me. I had forgotten how much I loved the feeling of being on an expedition surrounded by likeminded people that are equally passionate about contributing to our common goals of safety, cave conservation, and cave exploration. It has only been two months since I was on an expedition, but it feels like forever ago.

I really enjoyed the teamwork, good company, and the amazing learning opportunities from working with such experienced cavers. I learned how to do inventory which helped me better identify different cave features. I had the opportunity to belay Derek, who is a very skilled climber, and see his gear and technique up close. I was given several opportunities to shadow sketch, which I greatly appreciated, so that I could implement the sketching feedback that the park had given me.

Our goal was to survey leads in the Guadalupe Room. Team 2 surveyed going passage that they dubbed, “Lil’ Lechuguilla”. Team 1 climbed into the Gossamer Loft, which Derek bolt climbed on a previous trip, but had not yet been fully surveyed. It was an extremely delicate flowstone area for which we needed a full change of clothes and aquasox. The entrance was unassuming, up a flowstone climb into a narrow slot in the ceiling. Tiffany entered first and we immediately heard exclamations of, “Oh my god!” and “Wow!!!” My curiosity was piqued, and was not disappointed.

It was an extremely delicate area, pristine flowstone floors, thin delicate white formations literally everywhere. I felt like I was a spy trying to move through lasers except the consequences of a misstep here were much more serious. We moved extremely slowly throughout the passage and unfortunately it did not go, but we surveyed about 150 ft. Since we were moving very slowly through this area, I was able to concentrate and apply the recent feedback I had been given to my sketches—I was quite happy with the results especially the profile view.

We traveled through the New Mexico Room past the climb to Chocolate High to the Ranger Room. Team 1 departed from here to clean up some bad survey loops, and they discovered a problem with the station names being mistyped. Team 2 resurveyed a few shots in the Ranger Room, but we were stopped by time and lack of rope. I began as shadow sketch, but before even shooting the first station, I dropped my protractor and it slid over the edge down a 100+ ft pit and was proud of myself for not giving in to the instinct to lunge and grab what I had dropped. I took over the inventory, which I had never done before, so Steve explained the task to me and I learned a lot about the different types of formations and features found in caves.

After a short break, we returned for the 4th of July Liberty Dome climb. It was climbed initially in 1976 and after the ropes were pulled, it was thought that a lead was missed. Liberty Dome is about 220 ft tall above the 150 ft deep Bottomless Pit at the end of the Big Room. Derek climbed left first, then up, so as to avoid the very serious overhang for a less but still overhung route. Once past the overhang, he set a new belay station, and I climbed up to continue the climb from there, and here I stayed for over 3 hours belaying and enjoyed the beautiful view of the Big Room lit up from above and would occasionally look down into the Bottomless Pit and feel very high up even though I hadn’t climbed very far. On the way up, I had swung out over the Bottomless Pit, which I initially enjoyed, but as I climbed, I realized the swinging was creating a sawing motion on the edge of the overhang. Derek did his best to reduce it and I climbed as fast as I could and later I sacrificed a knee pad as a rope pad. A total of four hours later, Derek finished the climb and made his way back to me, leaving the clean up for the next night. It was now midnight and we were all exhausted. Hunter Klein took photos, Steve Reames on video, and Marty Reames assisted with both.

All thoroughly beat from surveying and bolt climbing late into the night, we decided it wise to take a rest day, and go back at 6 pm. This day, Aria’s Lechuguilla team was preparing for their 8-day camp trip to the Near East. That evening back at Liberty Dome, Derek cleaned up the climb and rigged four rebelays as there were several sharply overhung sections. I climbed up and belayed him as he free-climbed up an extremely steep (50+ degrees) slope covered in loose sediment. This section was previously free-climbed off rope in 1976. Derek found an old film canister with a deposit slip to Michael Mayer and eight cents, and we saw three extremely rusted hangers and two aluminum carabiners.

I climbed all the way to the top and saw where Derek had gotten off rope to explore, and while it was reasonably flat, I looked down the extremely steep loose stop that went directly to a 200+ ft drop and decided to stay on rope. Again, it was midnight, Derek was too exhausted too sketch and he was the only park-approved sketcher on the team, so we went back to Quarters 56.

Team 1 returned to the same area trying to fix bad survey loops. Team 2 went to resurvey an area just off the route to the New Mexico Room. Although the cave passage wasn’t particularly exciting, we had a lot of fun teasing Derek for dropping pencils down pits. The pencil, however, was recovered unlike the protractor I had dropped earlier. We took a two-hour break on the surface, and then all went back to Liberty Dome for the survey.

While Derek rigged a traverse across the top where I chose not to get off rope, I worked on an extremely detailed cross section of the dome. I followed the survey team up and was wholly focused on my sketch as I had never sketched anything this large or this vertical before so it was a new challenge on two fronts. When I finished, the whole team was up in this alcove at the end of the traverse and they had already thoroughly poked any possible leads with the verdict that there were none. From below, shadows make it seem as if there is a promising lead, but at eye level and with more powerful lights, it is clearly just an alcove. It took a while to get everyone down the pit, which had a traverse and four rebelays. Marty, Tiffany, and I huddled for warmth in the alcove and my need to pee increased exponentially. They kindly let me go next and as soon as I heard the beautiful words, “Off rope!” I jumped onto the rope and zoomed down. In my excitement, I got my braid sucked into my bobbin, but managed to resolve the situation calmly and quickly, and a few seconds later found my pee bottle in my pack and was much happier than before.

One final thought, on the day that the Lechuguilla team was preparing for their trip, I realized that I first met many of the people here in Quarters 56 at the NSS Convention last year (2018 in Montana), and it made me realize how special Convention is. It’s not about networking, although it certainly provides that opportunity, but it’s the same feeling as an expedition—a gathering of people that share your same values and passions (*ahem* obsession).