Every Breath You Take

How visitation is affecting the air quality in Carlsbad Cavern

Carbon dioxide is a naturally occurring gas in Earth’s atmosphere, but in high concentrations, the gas can act as an asphyxiant. OSHA and other government agencies recommend a 5,000 parts per million (ppm) workplace exposure limit of 8 hours a day during a 40-hour work week. High concentrations of CO2 in cave air can suppress the speleothem growth, although studies have not given a specific threshold. Studies have calculated a limestone corrosion threshold of 2,400-2,900 ppm. There have been several studies on the anthropogenic (human driven) sources of CO2 and CO2 levels in show caves. They have found that visitors can as much as triple CO2 levels in caves and that ventilation plays a big role in CO2 levels. In the 1970s, climatology studies conducted in Carlsbad Cavern found that the elevator shaft created a chimney effect, drying out the cave formations and pools. As a result, revolving doors were installed to reduce airflow in 1972. These studies included some data on CO2 levels in the Underground Lunchroom from 1969-1973.

The graph above shows summer maximas and winter minimas of CO2 levels, which match the cold trap ventilation regime of Carlsbad Cavern. When a cave has only one entrance, the colder dense winter air sinks and creates more airflow, and conversely, there is little airflow in the summer—this is known as a cold trap.

I placed three Wöhler CDL 210 CO2 sensors in the cave (see map above): at the base of the elevator, Big Room Junction, and King’s Palace. The elevator is of interest because on high visitation days, long lines can form here. The Big Room Junction is a central point in the cave and almost every visitor will pass through this area whether they hike in down the Main Corridor or take the elevator. King’s Palace is only accessible through tours, which occur five times a day in the summer and once daily in the winter. The sensors were set to take readings every five minutes. These sensors collected data from June to July 2019, but suffered several significant data losses. The reasons range from user error (me!) to thunderstorm driven power surges to automatic baseline calibration issues.

The Wöhler sensors have a built-in automatic baseline calibration function which relies on the device being exposed to fresh air at atmospheric concentrations of 400 ppm once a week. Without this exposure to fresh air, the devices gave inaccurately low readings. The above chart shows data corrected to compensate for the automatic baseline calibration. It shows a steady rise in CO2 levels during June and July 2019. Note that, although CO2 levels decrease in the evening, the CO2 levels do not always fully return to background and instead keep rising day-on-day, so any daily comparisons need to be corrected for the cumulative increase.

Visitation numbers are provided as a single number—tickets sold per day. To be compared to CO2 levels, we also need a single number for daily CO2 concentration. I took the average of CO2 values during cavern operating hours and subtracted from it the CO2 values at the time of opening that day to correct for the cumulative increase. There is a strong correlation between visitation and CO2 levels as shown in the graph above.

As mentioned, there were significant data losses and this is a limitation of the preliminary results of this study. However, my main project was to set up the carbon dioxide monitoring program, which will run for a year after my internship concludes. Hopefully, I’ve already made all the mistakes and worked out the kinks for the project. These are some preliminary conclusions, but there really needs to be more comprehensive data for a year before drawing any real conclusions.

On the Northeast Invasive Task Force

If there’s one thing that I’ve picked up on while working at Minute Man it’s how to spot an invasive plant around the park. After going to Grape Island in the Boston Harbor and picking Read more… 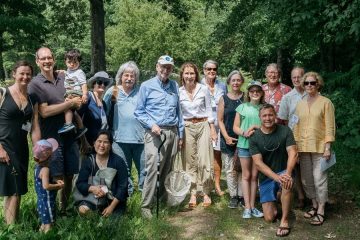 The Great Walden BioBlitz just happened to be on the hottest day of the year in Massachusetts with a high of 95. For more info on what is this BioBlitz? Check out my previous blog! Read more…