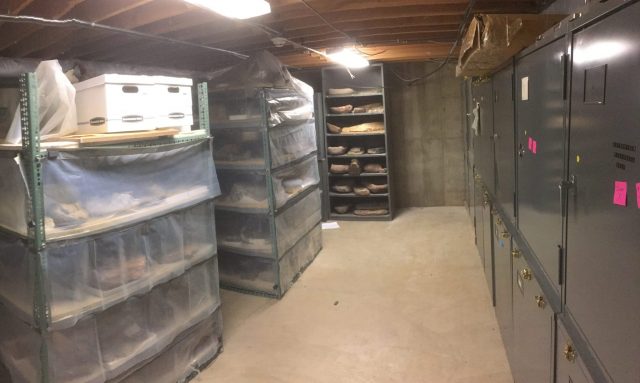 15 Aug Holding Off the Hantavirus

Hi everyone, from the post-workshop end of time and space!

This is the first of my pre-workshop event posts that I’m writing post-workshop. A major component of our work at Dinosaur National Monument was organizing and cleaning the collections spaces. Currently, there are two major holding areas for fossils in the monument, one for each of the two states included in DINO’s borders. The building on the Utah side, while overcrowded, is mostly clean, save for a few long-standing spider webs. The Colorado storage room has a host of different issues.

Like the Utah storage unit, the basement at DINO headquarters in Colorado holds many large bones collected within the park, along with the bulk of the archeological collections and some modern bones. There is plenty of elbow room and floorspace here compared to the building on the Utah side. However, HQ’s basement has a long history of rodent infestation, which presents a major health risk in the form of hantavirus.

Hantaviruses are viral infections that are transmitted through inhaling or touching rodent feces or urine. If contracted, one can develop Hantavirus Pulmonary Syndrome (HPS), which is a rare but lethal disease that results in chronic lung problems. There is no vaccine or cure for HPS, only medical treatments that can alleviate symptoms once the virus is contracted. Even though Julia, Kellyn, and I are within the prime age range for immune resistance against hantavirus, ReBecca made it very clear that we should not be gambling our health and futures by not taking appropriate measures to protect ourselves and others.

The precautions we took were based on recommendations issued by the NPS. In order to protect ourselves, we donned personal protective equipment (PPE) consisting of Tyvek body suits (lovingly referred to as “bunny suits”), half-mask respirators with filters, and disposable nitrile gloves. We very likely looked like we were entering a nuclear wasteland. (Aside: Sonia from Carlsbad Caverns noted that we should also include goggles in our PPE in the future, as Hantavirus can get into the eyes and form cataracts, yikes!). We were also equipped with “Hanta Kits”–bleach solution, steel wool, and mouse repellent–in order to clean work areas and prevent future infestation where we could.

With our gear equipped, we could take bones from infected shelves and sunbleach them outside for a minimum of 4 hours (two hours on each side of a bone) before loading them up into our vehicle to be transported to Utah for later cradle construction. This process was heavily dependent on having consistently clear skies, and some days, the weather ignored our pleas for aid. Even despite the occasional cloudy (and very gnatty, yeugh) days, these endeavors were mostly successful, and the sterilization process allowed us to use previously unsafe bones in our Dino Demo programs and ensure that these bones won’t infect future researchers and visitors. We’re still alive and mostly disease-free so far!

Next up on the blog itinerary, in no particular order: Yampa river adventures and teaching Girl Scouts some paleo-math, plastering, and anatomy.