I just gave my summer project presentation in the Biscayne National Park headquarters’ conference room! It was a great way to practice for my next presentation in DC. In a nutshell, I completed a lot of data analysis from reef-fish visual census surveys within Biscayne National Park from 1999 to 2018. I looked at 10 fish family groups, with a total 62 individual species. Graphs were created for:

and juvenile vs. adult densities and abundances

Because I looked at so many fish, it was difficult to make a huge, conclusive statement. However, as the data is now better organized and manageable, my supervisor can use it along with my how-to guide (which ended up being 20 pages, but because I added many screenshots and examples!) for future regulations. Although Biscayne National Park has its own boundaries, laws by the Florida Fish and Wildlife Conservation Commission are applied.

I wanted to share what I think is the most important and relevant slide of my presentation:

Lbar represents the mean exploited length (cm) of the fish. It is the average between the legal size at first capture; and the maximum size recorded. The y-axis is length in centimeters and the error bars represent the species-specific standard errors per year. These four fish are known to be heavily fished both recreationally and commercially, which is why I chose to put them on this graph. The dotted lines represent the minimum size limit (MSL) for each species. Mutton snappers and red groupers are consistently hovering just above their MSLs, while schoolmasters and yellowtail snappers are consistently below their MSLs.

This Lbar is an important indicator for the population of a species because over-fishing right at the limit or just above it will reduce the average size of the population over time. This, in turn, makes the population younger because the fish are not getting as big as they could. A larger Lbar requires an increased survival.

So the schoolmasters and yellowtail snappers that have been surveyed continue to be smaller than their limits! Because they are being fished so much, they are not getting the chance to even grow past their legal limit. It is here that I must note that these are the current minimum size limits; I’m not sure when they were implemented or if they changed in the past. However, this would be interesting to look at in regard to future regulations.

This summer I have gotten a better grip on using R Studio and being self-disciplined. I learned a lot: about fish, South Florida, its culture… to name a few things… and am so grateful for this unique experience 😀 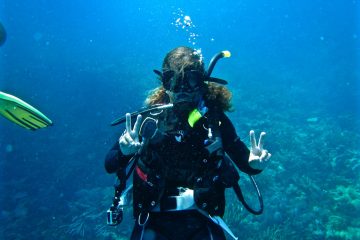 Hola mi gente! My name is Alexandra Verdeja-Perez and this August I will be interning with Mosaics in Science and doing research in Biscayne National Park. In the park, I will be working with several Read more…

To Fairbanks and Beyond

Currently I am teleworking from my home in Fairbanks, though later I hope to spend more time at the National Park Service Fairbanks Administrative Center. My supervisor is currently working toward myself and the other Read more…