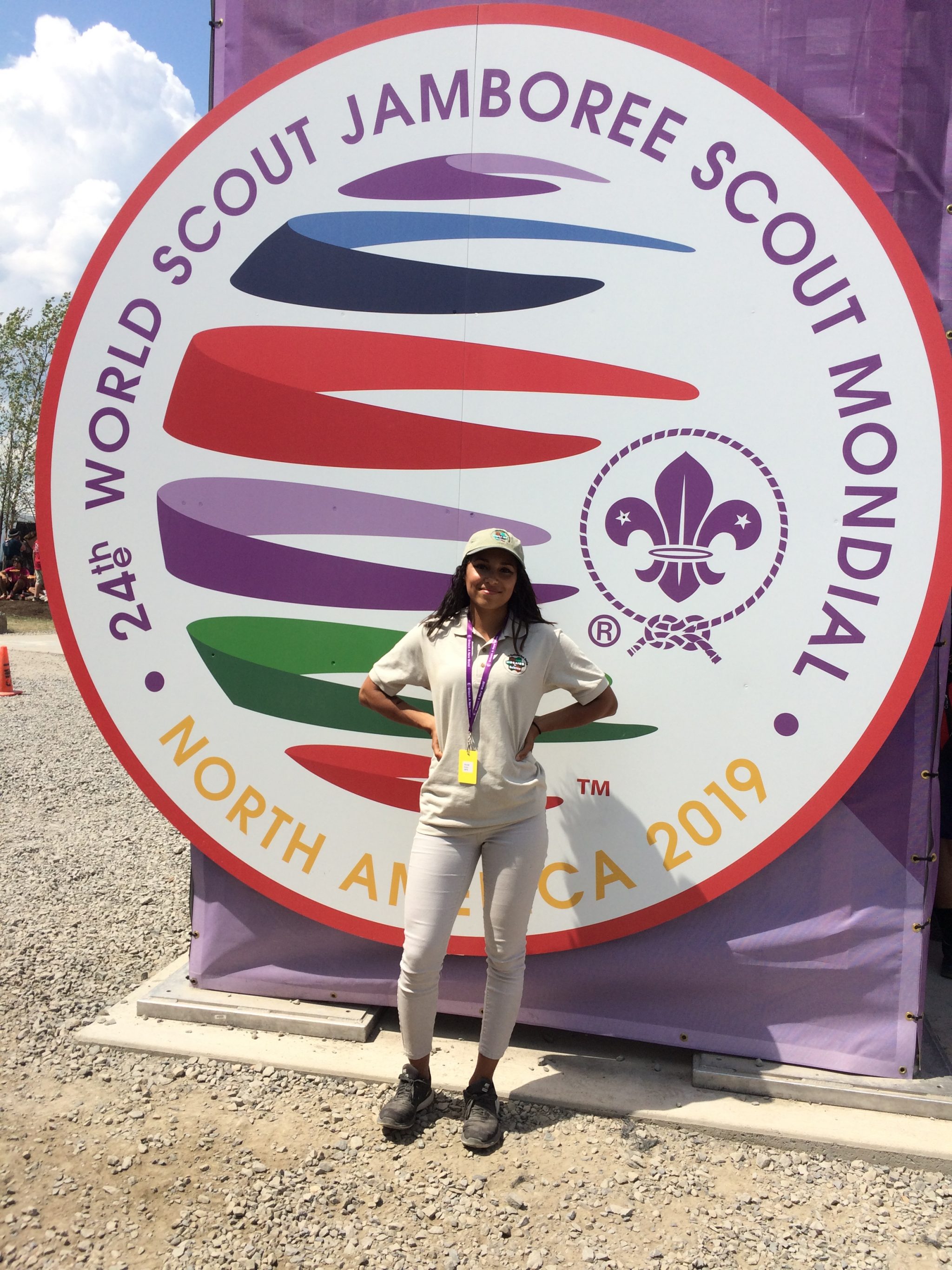 When we first got to the entrance of the Jamboree, all I could think was: “I would never in my life want to be the person in charge of organizing all this.” Picture about 45,000 Boy Scouts and Girl Scouts, 25,000 tents, and thousands more workers and volunteers all on 14,000 acres in the mountains of West Virginia. Now imagine that only 8,000 of those scouts are from America. This is what is going on about six miles away from our intern house in the New River Gorge.

Below I discuss a few different aspects of the 24th World Jamboree that I found particularly meaningful or noteworthy.

DRESS: When you get off the bus, you are greeted by crowds of people milling about, most dressed in some variation of a scout uniform. By “variation” here I mean anything from the tan button downs and shorts we are used to in America, to sarees, to long gowns and headdresses, to pointy hats made of straw, to kimonos. The similarity between these uniforms? Neckties. Scouts and supervising adults from each country have their country’s flag (or some interpretation of it) around their necks, identifying some, and concealing the identities of others who have traded their way to possession of several different country’s neckties. Apparently, Ireland’s necktie was rare and a valuable trading item. Though the trading system at the Jamboree undoubtably leads to some contentious interactions, I found this aspect of the event both fascinating and encouraging. A scout from America wearing the necktie from Brazil was like a little beacon saying: “A positive, culturally educational experience happened here. This kid now knows what it is like to meet someone from a different country and interact pleasantly with them!” Meeting and understanding people from different cultures as adolescents is important in facilitating future acceptance of different peoples as adults. I was excited to see proof of this happening in the backcountry of WV.

LANGUAGE: Driving down the gravel road to the Jamboree in the giant busses, I couldn’t help but wonder how everyone here was managing to get along and run activities smoothly when only a fraction of the attendees spoke English! This question was answered within five minutes of being there: scouts from almost every other country spoke English, most of them very well. Walking along the paths between tents, I could hear children switching seamlessly between Swedish and English, French and English, Spanish and English, Japanese and English, several languages I had never heard before and English. I realized afterwards that America is one of the few countries where it is a special talent to speak more than one language, and that I wish I remembered more of my Spanish. Many other countries require being at least bilingual. I had one of the other rangers working with me say he met a 13-year-old who could speak six languages. Something to think about.

SOCIAL ORGANIZATION: Walking from the Parks Canada tent to the Department of the Interior Tent, I saw many scouts walking in groups consisting of boys and girls from only one country. However, I saw almost as many couplings of scouts from two different countries. Most of the time, it seemed as though the two were friends who had found something they liked in one another despite their vastly different backgrounds. Other times, they seemed to have little crushes on one another despite the distance between their home countries. It reminded me somewhat of those pictures you see of a little black baby and a little white baby smiling at each other, symbolizing the inherent goodness and accepting nature of humans, but this was better. These kids are old enough to know what they are doing, to see someone from a different country and know that the way they do things or think of things in life will not be the same. They are old enough to know that associating with someone from a different country or different background is likely to be more difficult and confusing than sticking to the groups of scouts that came from their home country. They choose to take that risk and branch out anyway. If that isn’t noteworthy I don’t know what is.

WHAT I DID: My role, though perhaps not as interesting as watching the mixing of all different nations, was to help my supervisor Abby in leading ‘fireside chats’ with groups of scouts that came into the tent to sit around a makeshift campfire. We talked to them about why natural spaces are important, how the National Park System in America works, and asked them how the preservation of natural resources and lands in their own countries was handled. Aside from participating in some enlightening chats, I also had a chance to meet and talk with some rangers from Parks Canada as they helped spray on temporary tattoos. After staying a while, I was able to walk to the Department of the Interior tent and go through all the activities they had set up. On the way there (it was about a 10 minute walk) I also stopped by the Sustainability Treehouse, a beautifully constructed and fully self-sustained three-story house with educational exhibits strewn throughout, teaching people about the methods and importance of living sustainably.

All and all, despite the heat and the dust, I am incredibly glad to have been given the opportunity, which was not made possible for any of the other interns here this summer, to go and experience something so magnificent. I felt as though I went around the world in 8 hours… in 2 miles… in West Virginia. Thank you.