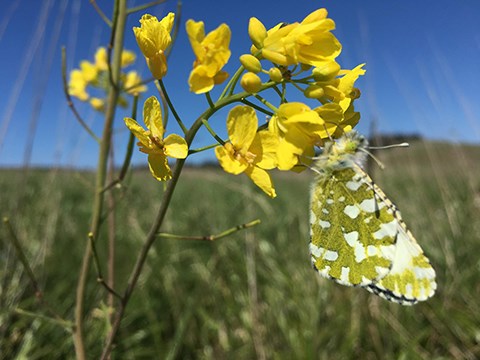 More than ten thousand years ago, as the last ice age was ending, glaciers ripped through what is now the Salish Sea located between present day Canada and United States in the Pacific Northwest. The immense glaciers ripped apart the earth and reshaped both land and sea. The toughest rocks in the area survived and became what are today the San Juan Islands (San Juan Island, Lopez Island, Orcas Island, and many other smaller islands), and the weaker rock was gouged away, leaving ocean on both sides of the islands.

The area was first settled by the Lummi people, one of the groups of the Salish-speaking people for whom the Salish Sea is named. For thousands of years, they lived in the San Juan Islands and the surrounding region, coexisting with the natural environment. Then, in the 1850s British settlers and then Americans began to rapidly settle on San Juan Island, which had fertile prairies with deep topsoil and abundant timber. Thousands of sheep and other animals were brought to the island, and crops were planted to build up a reputable agricultural presence and lend credibility to both sides’ territorial claims to San Juan Island.  Ultimately, the dispute came to a head in 1859, when an American farmer shot a British pig, leading to a rapid escalation of tensions and sparking the twelve year conflict and dual military occupation by both nations of the island, known as the Pig War. The British military occupied the northwestern part of San Juan Island, and the Americans chose the southeast peninsula of the island. Finally, in 1872 the conflict was resolved via arbitration through a third-party nation, Germany, and the islands became officially part of the United States. Subsequently, both military forces were withdrawn, though today their camps remain, a reminder of the possibility for peaceful problem-solving and coexistence.

Though the park is a national historical park, it is not lacking in natural beauty or wildlife. As human history was being made in the Salish Sea, natural history was also being written. In 1862, the Island Marble butterfly (Euchloe ausonides insulanus), a subspecies of the Large Marble Butterfly (Euchloe ausonides) was first discovered and described on Vancouver Island. The subspecies was collected again in 1908, and then it was not seen for almost a century. It was presumed extinct until in 1998, when it was re-discovered at several sites in American Camp and on neighboring Lopez Island. The butterfly’s population has since declined again, and it is now only known to occur within the boundaries of American Camp and nearby land on San Juan Island. In the spring of 2020, the subspecies was listed as endangered by the U.S. Fish and Wildlife Service (USFWS). Similarly imperiled and found in the park is the rare coastal prairie habitat which the butterfly and a variety of flora and fauna depend on to live. Invasive plants and animals, including various grasses, thistles, European rabbits, red foxes, and others threaten the natural balance of this ecosystem, and  the prevention of naturally occurring fires that rejuvenate the prairie and prevent the encroachment of forest are leading to changes in the floral composition of the site. However, prairie restoration efforts are underway to ensure that native wildflowers, like the camas flowers that were used by the native Lummi people for food, and others, persist for the enjoyment of future generations. American Camp, where I will be working, also features several lagoons and a small freshwater pond, a few miles of beach, woodland, and Mount Finlayson, which stands at about 290 feet above sea level.

Depending on the day, my duties in San Juan Island National Historical Park will take me to a variety of the sites I described above. I may be working in the plant nursery, or collecting seeds in the prairie, releasing butterflies back on it, and surveying butterflies in the area. Another project I may be assisting in is the Dragonfly Mercury Project, which is an initiative across more than 100 national parks to sample the levels of mercury in dragonfly larvae (which develop in freshwater for a long time, are easy to catch and identify, and are fed on by animals higher in the food chain). There will also be some work with bald eagle monitoring and trapping/monitoring for Asian giant hornets. Finally, I will also be photographing the park’s flora and fauna and updating informational materials for the park’s website, and hanging out with other park staff!