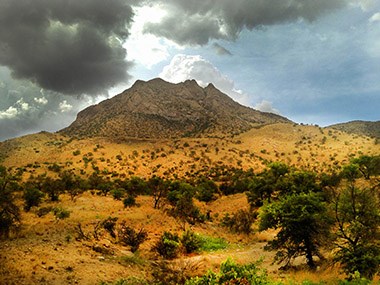 While I won’t be on site until June 15th, I wanted to describe the sites that I will have the benefit of spending time in this summer. The SEAZ is composed of Coronado National Memorial, Chiricahua National Monument and the Fort Bowie National Historic Site. Most of my time will be spent between my home-base at Coronado and at Chiricahua.

The three sites are part of the general Basin and Range Province, a geologic province made up of mountain ranges and valleys which occupies much of the western and southwestern part of the United States. Fort Bowie and Coronado both represent important historical and cultural sites in the development of the American West, and Chiricahua preserves the natural beauty of the geologic features left over from a cataclysmic volcanic eruption that occurred roughly 27 million years ago. The three sites are uniquely positioned in a chain of sky islands known as the Madrean sky islands. The sky islands are isolated and forested mountain ranges that are surrounded by deserts. Because of this, there exists a unique biodiversity hot spot as the sky islands connect temperate and sub-tropical regions.

While each site is special and unique, I am most excited to visit Chiricahua and observes its rhyolite pinnacles which I first learned about in my Arid Geomorphology class as an undergrad. The pinnacles are the result of the volcanic tuff, or deposits, and the resultant erosion due to the freezing and thawing of water from the last Ice Age.