Butterflies and Moths: The Lepidoptera Connection 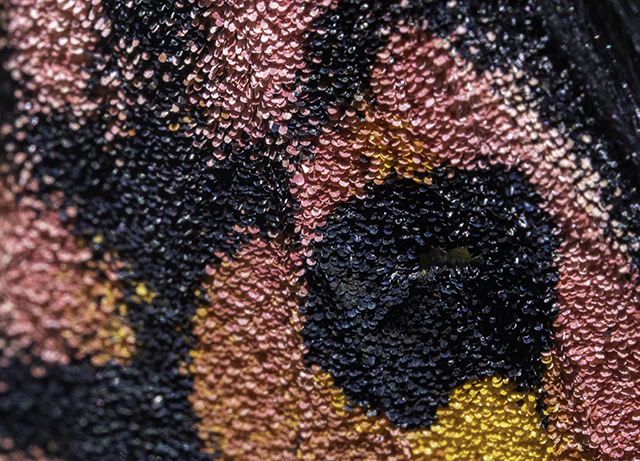 Besides being seen very differently in the public image, moths and butterflies tend to have a few general characteristics that set them apart from each other: moths have more stout, hairy bodies in comparison to their wings, while butterflies tend to have narrower, longer bodies in comparison; moths have shorter, feathery or pointed antennae, and butterfly antennae are longer and club-shaped (a shaft with a rounded bulb at the end); moths tend to be (but aren’t always!) less colorful, whereas butterflies often display more vibrant colors; moths often fly at night, whereas butterflies fly during the day; moths pupate (turn into adults) in a silky cocoon, and butterflies do so in a hard chrysalis without silk cover. Finally, moths have an additional feature that butterflies do not, called a frenulum, which couples the forewing and hindwing together in flight. There are exceptions to all of these generalizations, but typically these traits distinguish the two groups.

“So,” you might be wondering, “what do butterflies and moths have in common?” The key trait of the family that butterflies, moths, and skippers (technically butterflies but often mistaken for moths) are all a part of is that their bodies and wings are covered in tiny scales! In fact, this distinction is what their family, the Lepidoptera, is named for—from the Greek words “lepis” for scale and “pteron” for wing. The tiny scales contribute to the vast diversity of colors and patterns found on the wings of both butterflies and moths! Besides their anatomy, butterflies and moths play similar roles in the bigger ecological picture: both moths and butterflies may be major contributors to ecosystems as pollinators, and both may be agricultural or ecological pests; both may be brightly colorful or drab, and there are plenty of other common points.

Both butterflies and moths are abundant in the San Juan archipelago due to the unique climate and the rare prairie and Garry oak savannah ecosystems that are found on the islands. Despite being located in the typically rainy western Washington state, these habitats resemble the drier eastern half of the state because the archipelago is in the rain shadow of the Olympic Mountains. This means that precipitation is often blocked by the mountains before it can reach the island, so unique plants and animals call the islands home. One of these unique creatures is the main focus of one of San Juan Island National Historical Park (SAJH)’s main projects, the Island Marble butterfly (Euchloe ausonides insulana). The Island Marble is an endangered subspecies of the Large Marble butterfly, and this subspecies is known to exist only on San Juan Island (currently only within American Camp and adjacent properties).

Though the Island Marble is noteworthy for its rarity (and its beautiful wings), there are many other unique species of butterflies and moths on the island and in the surrounding areas. The next time you go for a hike at SAJH, keep an eye out for some of them! They can be found in pretty much all terrestrial environments on the island.