SAJH: A Place Beyond Compare 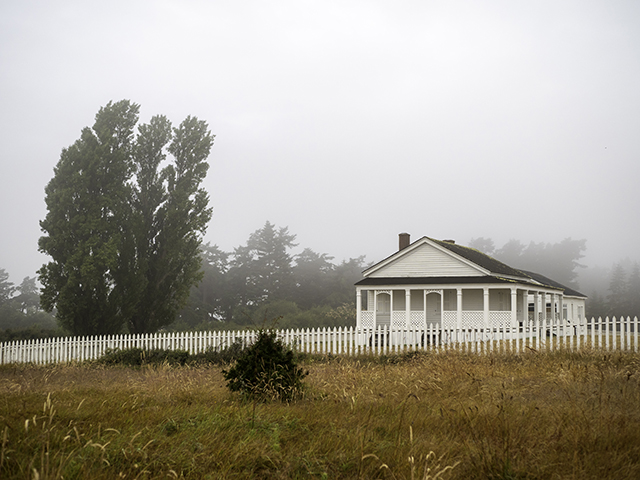 22 Jul SAJH: A Place Beyond Compare

Ever since I was a kid, I’ve always heard of tales of love at first sight in movies and music, but in my own experience, I have mostly found that I come to love things more through time and familiarity—that is at least until this summer!

When I was initially offered my Mosaics in Science position to work at San Juan Island National Historical Park (SAJH) in Washington, the first thing I did was look the park up on Youtube and Google Earth. It seemed like a pretty cool place to work, and I was really excited to hear that there was a prairie right on the ocean, as well as a mix of other habitat types and wildlife that use them. Soon after, I accepted the position, and I started working remotely from Missouri to prepare for the work I would eventually be doing at the park.

One of the first assignments I had was to look at a sample work plan I had been given by my supervisor at my park and write about what a typical day working at SAJH might look like for me. I wrote about how on any given day, I could be doing tasks like monitoring the bald eagle nest by the visitor center, working in the lab or in the field with the endangered Island Marble butterfly on the dunes or the Redoubt (prairie) site, working at our nursery, participating in the Dragonfly Mercury Project in one of the park’s ponds, or photographing the park’s natural and cultural resources in either the American Camp or English Camp site. While I’ve done all of those things and more, I never could have imagined the reality of the work that I have been doing at the park, or the immense nature of the park itself.

On paper, SAJH is a pretty small park compared to some others in the National Park system. Nearby, and visible from SAJH, Olympic National Park consists of nearly a million acres, snow-capped mountains, and long stretches of coast and rainforest; SAJH is only about two thousand acres between its two sites, and its highest climbable point is 650 feet (Young Hill in English Camp). Before I saw SAJH, I imagined it would be kind of small, and that I would be able to hike or bike all around the two sites in just a little time. When I first biked to the park from nearby Friday Harbor, where my housing is, I knew that at least the first of those two thoughts was incorrect. Rolling into the site, it became apparent that the park was a lot more dynamic than the two-dimensional maps of it I had been looking at online. I smiled when I passed the first beach in the park while zooming down a hill, and as I came out of the forested road, I was blown away to be looking out over the park, which suddenly seemed vast and daunting to bike through (some people might say otherwise, but I’m not ashamed to say so!).

I don’t often experience love at first sight, but with SAJH, I immediately was enchanted. I spent a few days exploring American Camp (where American soldiers were stationed during the Pig War, which SAJH was created to commemorate), and soon I started working there when my two weeks of self-isolation after coming to the island had ended. The next week, my work took me to English Camp (where English troops lived during the Pig War) for the first time, and I got to explore its forested hills and sheltered bays. In the weeks since, I have traveled back and forth between the two sites, which are about 13 miles apart, to perform various tasks to support the park’s missions in each. I have spent countless hours wading through seas of thorny invasive blackberry bushes—and eating tasty blackberries—and thistles on the prairie at American Camp; I have spent an afternoon netting dragonfly nymphs (larvae) at English Camp on a pond that a group of otters and many songbirds and other animals call home; I have spent a day on my hands and knees scouring over patches of peppergrass for tiny butterfly eggs, and I have spent a lunch break or two in the shade, power napping before a big afternoon; I have seen orcas breaching on the water while collecting wildflower seeds on the bluffs of American Camp, and I have seen vultures and butterflies soaring around Young Hill in English Camp while mapping invasive plants and collecting seeds for restoration projects there.

I could go on and on about the things I have seen and done at SAJH—every day here is full of surprises and discoveries—but instead I will say this: no matter how big or small a national park is, they are all made parks for the same reason, because they have natural or historical elements that are important to the nation and even the world. SAJH is not as big as some parks, but I don’t think that sort of comparison means much for any national park; besides, maybe that just means its beauty is packed into a smaller, more accessible package!