Saving Habitat to Save the Island Marble Butterfly 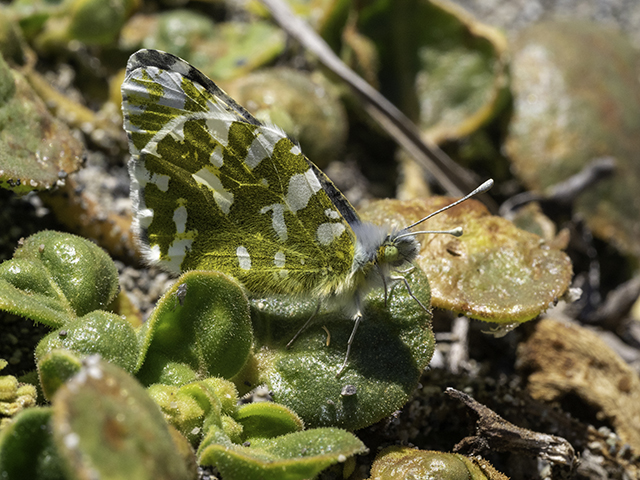 27 Jul Saving Habitat to Save the Island Marble Butterfly

It is often said that it takes a village to raise a child. In the case of the endangered Island Marble butterfly (Euchloe ausonides insulanus), the butterfly is the child, its habitat is the village, and the village is metaphorically on fire.

The Island Marble butterfly (IMB) was listed as endangered by the US Fish and Wildlife Service (USFWS) in May of this year after a lengthy push to give comprehensive protected status to the butterfly. The Island Marble, which is a subspecies of the Large Marble (Euchloe ausonides) was first discovered in the 1860s on Vancouver Island, on the southern edge of Canada, just a few miles from the San Juan Islands in Washington state. The butterfly was documented occasionally until 1908, when it seemed to disappear from the Earth. It was thought to be extinct until 1998, when a butterfly survey on San Juan Island coincidentally found it and brought its existence back into the public view.

Since 1998, much work has been done to determine the status of remaining IMB populations and to attempt to safeguard them against the many threats to the survival of the species. Extensive surveys of possible IMB habitat in Washington and British Columbia found several populations on San Juan Island and nearby Lopez Island. Unfortunately, in recent years, suitable habitat for the butterfly has continued to shrink, and it is now only found at one site: American Camp in San Juan Island National Historical Park (SAJH), and a few properties adjacent to the park.

Though the Island Marble has been listed and is now protected under the Endangered Species Act, there are still many threats to the remaining population at American Camp. Currently, grazing by deer, which no longer have natural predators on the island due to human activity and have become far more numerous than they naturally would be, is a big problem. The deer eat the mustard plants that the Island Marble uses for larval food and nectar, and may both reduce the number of suitable host plants and inadvertently eat IMB caterpillars, eggs, and pupae. There are also threats from non-native grazers introduced by people, including invasive European rabbits and snails, which eat much of the native vegetation, to the point that some parts of American Camp have very few native plants. A few courses of action have been considered to deal with this problem.

While the destruction of native plants and IMB host plants is a problem in and of itself, this has also led to gaps in the ecosystem, which are being partially but imperfectly filled by highly competitive invasive plants. Canada thistle, Himalayan blackberry, tansy ragwort, and many other invasive/non-native species are more vigorous (sprout sooner, grow taller and shade out other plants, and lay down more seeds, etc.) than many of the native prairie plants, which leads to dense—often painfully thorny—monoculture zones where there are fewer quality resources for native species, including the IMB and other insects, birds, mammals, and more. Fortunately, volunteers and professionals alike are working to remove the plants and prevent their spread through mechanical, chemical, and other means.

As human activity has changed the IMB’s habitat and the surrounding ecosystems, it has also changed the climate patterns of the world. This has led to increasingly strong storm surges—a big threat to the IMB, which utilizes habitats near the water on San Juan Island. Finally, visitors to the park may inadvertently be harming the IMB when they walk or drive off trail into its habitat, crushing host plants and larvae alike.

Though it may sound like the IMB is on its way out the door, at SAJH, National Park Service (NPS) and USFWS staff are working year-round to make sure that the butterfly’s needs are being met and to safeguard it for the future. As a Mosaics in Science intern in the park, in a normal year I would be working in the IMB rearing lab to raise the butterfly, a process which involves finding eggs and caterpillars in the wild, bringing them into the lab, then feeding them and providing them suitable living space for the next few weeks until they pupate (turn into chrysalises), and eventually releasing them into the wild when they eclose (emerge from the chrysalis) as adults. However, this is not a normal year, and due to COVID and social distancing requirements, I have not spent much time in the lab. Instead, I have spent time working with the park’s lead biotech and other staff on restoration projects within the park! These projects include using global positioning service (GPS) devices to map invasive plants for removal; collecting native seed from both wild plants and plants that we grow in the park’s nursery to propagate more plants and reintroduce them to spots where invasive plants have taken over; monitoring; trapping for Asian giant hornets, which were recently introduced to North America and could potentially disrupt the ecosystem by killing pollinators, mainly bees; and searching for IMB eggs and caterpillars in the field for others to care for in the lab.

If you have read this far, you may be wondering what you can do to help preserve the IMB’s habitat. There are a few simple things you can do! First, when hiking or driving in the park, staying on public trails and roads will ensure that you do not accidentally crush any Island Marbles or their host plants. This principle can be applied in other parks and outdoor areas as well to leave natural areas pristine! Another small step you can take is to check your boots and clothing for seeds when you travel. Invasive grasses and other plants put out lots of seeds, and they often are carried unknowingly by people in shoe laces, on the bottoms of boots, or clinging to fabrics. By taking a moment to check yourself and others in your group, you can help to keep habitats natural!