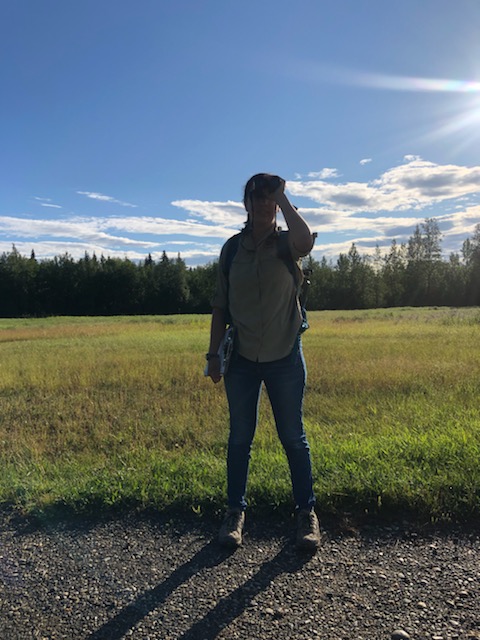 23 Jul The Language of Bird Songs

As I mentioned in previous posts, I have spent most of this summer teleworking from my home in Fairbanks. My main project has been to develop a video about the conservation of Yellow-billed Loons, specifically, the threats from environmental contaminants they face. Other interns are working on videos about different aspects of loon conservation, so that we may eventually link the videos together. I also put together an information flyer about pikas, which are small mammals that live on rocky slopes at high elevations in Asia and North America. The flyer will be on the Yukon-Charley and Gates of the Arctic National Parks web pages, to educate the public about these animals. In June I was able to do some field work down in Denali National Park, estimating the vole population in the park. After the career workshop in a couple of weeks, I will be heading down again for the fall vole survey.

Starting last Friday, my supervisor has been taking us out birding, teaching us bird survey techniques and how to identify different bird songs. Going out birding was a new experience for me, both in activity and learning method. One of my fellow interns said that trying to learn bird songs is like trying to learn another language, and I agree. My supervisor took us to Creamer’s Field, a local migratory bird refuge in town, so that we could practice. In all the years that I have been going there, I never realized just how many songbirds are hiding among the trees. Bird songs we learned are: Dark-eyed Junco, White-winged Crossbill, Lincoln’s Sparrow, Yellow-rumped Warbler, American Robin, Violet-green Sparrow, Tree Swallow, Gray Jay, and the Cliff Swallow. While we were there we also saw a Horned Grebe and a Lesser Yellow-legged Sandpiper. We conducted a point count twice, in both wetland and forest habitats. In the point count survey, we stood for three minutes, listening to the bird calls, and trying to identify all the birds we heard in a hundred yard radius, and where they were. I am not yet proficient at this, and have a lot to learn about the language of birds.

While I never thought there would be a day where I would jump for joy to have to get out of bed at six in the morning to go hiking for three hours, going birding with the crew was definitely a highlight of my week. I’m looking forward to possibly going again this Friday, and continuing to work on my loon video.