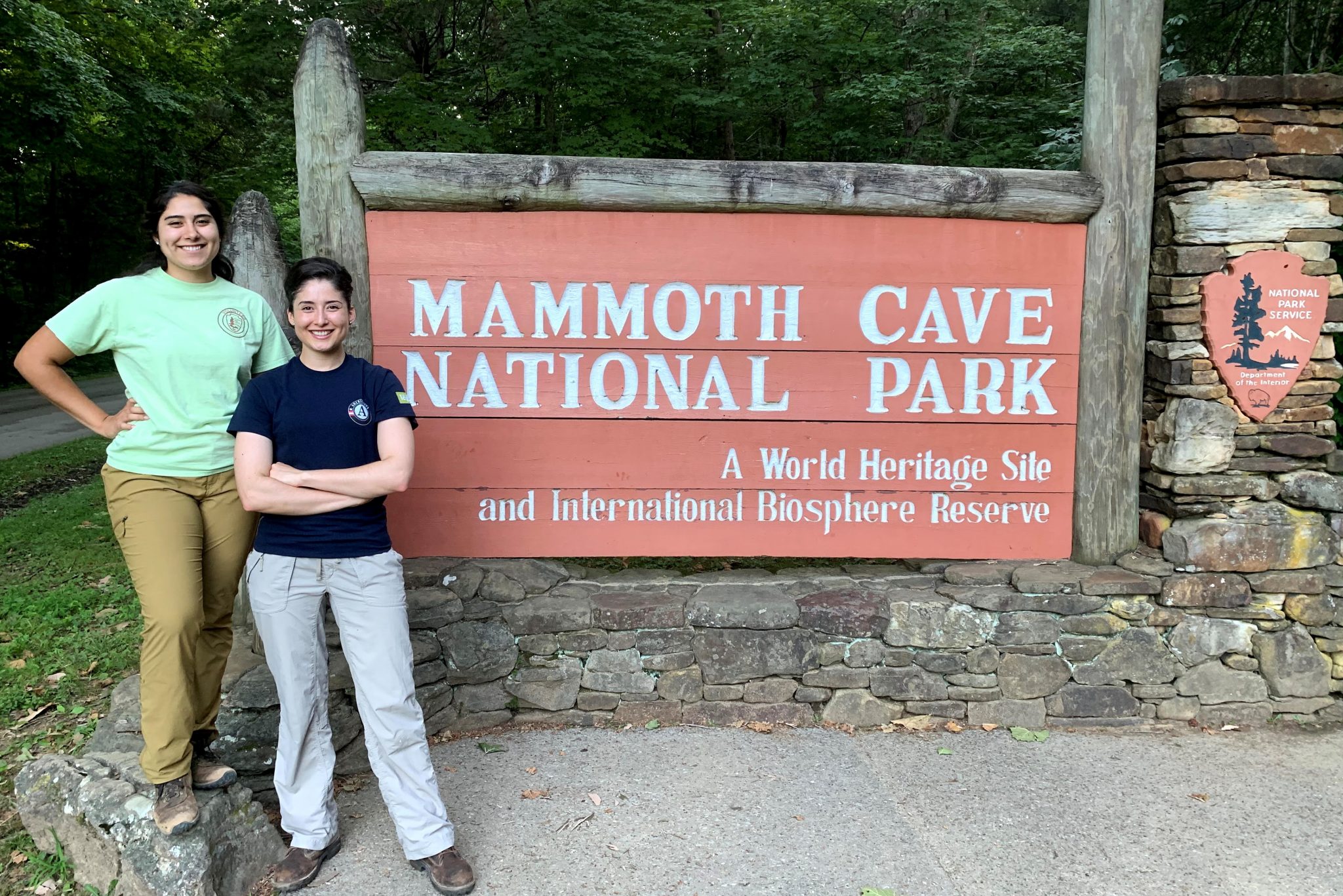 Let me take a moment and highlight two salt-of-the-earth sisters who have been monumental to my experience here at Mammoth Cave: Brenda and Vanessa. When I arrived at Mammoth, I dove head-first into the job. No adjustment period, no orientation. My radon monitoring was pretty independent and isolated work, so it was difficult to meet people at first. And without internet, I was getting a bit stir-crazy from not being able to connect to friends and family back home.

On my first day, the cave specialist Rick showed me how radon monitoring was conducted. Before we left for the cave, we recruited a volunteer to help us for the day. I wasn’t sure who she was or what she did at the park. “I’m Vanessa, nice to meet you,” she said. Vanessa mentioned she had a sister, but I’m terrible at remembering names, and I was already struggling to make sure I remembered hers. We made some small talk, but mainly listened to Rick as he explained how to properly take a sample, what sites to look out for, how to pace ourselves, etc. It was hard to talk anyway since I was huffing and puffing trying to keep up with them as we hiked up and down some steep cave passages named the Grand Canyon and Mt. McKinley. We finished up our day and we all parted ways.

Later that week, my supervisor Lillian told me that if I was looking for work, I should talk to someone named Brenda. The following Friday, I ran into Brenda who was hastily moving equipment out of a truck bed and into a storage garage. I introduced myself and offered my assistance, assuming it would be for the following work week. “Would you like to help us clean out the Maple Springs Ranger Cabin tomorrow?” Brenda asked. I wasn’t exactly enthused about working on a Saturday, which would have otherwise been my day off. Before I could say anything, she followed up with, “If we finish early, we can go and find waterfalls in the backcountry.” I couldn’t say no to that. We spent the morning cleaning out a CCC-era ranger cabin that was used as a bunkhouse for research groups and boy-scout troops. Brenda, Vanessa, and I finished up before noon, which gave us the rest of the day to hike the backcountry.

Throughout the day we became properly introduced. Brenda was the park’s Community Volunteer Ambassador. Her work was to help build and maintain trails, recruit volunteers, and coordinate projects for the Maintenance and Science and Resource Management divisions. Seeing her displays of knowledge and leadership, I asked her more about her background. Brenda graduated with her bachelor’s degree in psychology. After working in her field for a bit, she wanted a temporary break. That led her into joining the AmeriCorps National Civilian Community Corps. She became a team leader in the Southern Region where she led her group of nine throughout the southeast and Puerto Rico to provide disaster relief and build homes for people affected by hurricanes Maria, Irma, and Michael. Toward the end of her NCCC experience, Brenda was brought to Mammoth Cave to work on trail development. The folks at Mammoth quickly recognized her determination and brought her back as a bat monitoring intern with the Student Conservation Association. Her work ethic and supreme competency led the park to keep her on as the CVA. When I say she works hard, I’m not exaggerating. If she’s not hauling gravel, cement, or multiple fence posts, she’s in the office taking phone calls, having meetings, and coordinating events with volunteers. She never stops, nor slacks off. If there is a glue that keeps the Science and Resource Management division together, that would be Brenda. She deserves immense recognition for the work that she does on a daily basis.

Then there’s Vanessa. She’s a volunteer with the Science and Resource Management division. She’s attends Cal State Stanislaus and majors in geography with a focus in GIS. While cleaning out the ranger cabin, I learned that she had been part of NCCC as well. She worked for about 10 months in the Southern Region and worked on various projects in 6 different sites. Seeing as her older sister had connections at Mammoth Cave, Vanessa decided to volunteer here for the summer. Her schedule was open for most of the week, so I asked her if she’d like to join me on my radon monitoring. This research project was a large undertaking and it would have been nice to have partner, so I also asked if she’d like to become a co-author on my research project if she was interested. She happily agreed to take a larger role in the radon research. Naturally adventurous, Vanessa is always planning out backcountry hikes and caves to see. There’s not a single weekend that goes by where she hasn’t jam-packed it full of adventures around the park. It’s kind of nice having a national park in your backyard.

Over the course of the two months, my neighbors and I bonded over things like being first-gen children of immigrants, mutual love for good food, places we’ve travelled, and laughing at my attempts at speaking Spanish. We’ve gone on cave trips, maintained trails, performed miscellaneous SRM tasks, and even cleaned up a sinkhole dump. What I’ve learned from Brenda and Vanessa is that they are both highly capable people who proudly tackle the day’s challenges with ease. They are both disciplined and inspire others to be their best selves. Wherever they go after their time here at Mammoth, they will prosper. Whatever adversity they may face, they will overcome.

I still think back to my first week cleaning up the Maple Springs cabin. I’m glad I made the right choice.