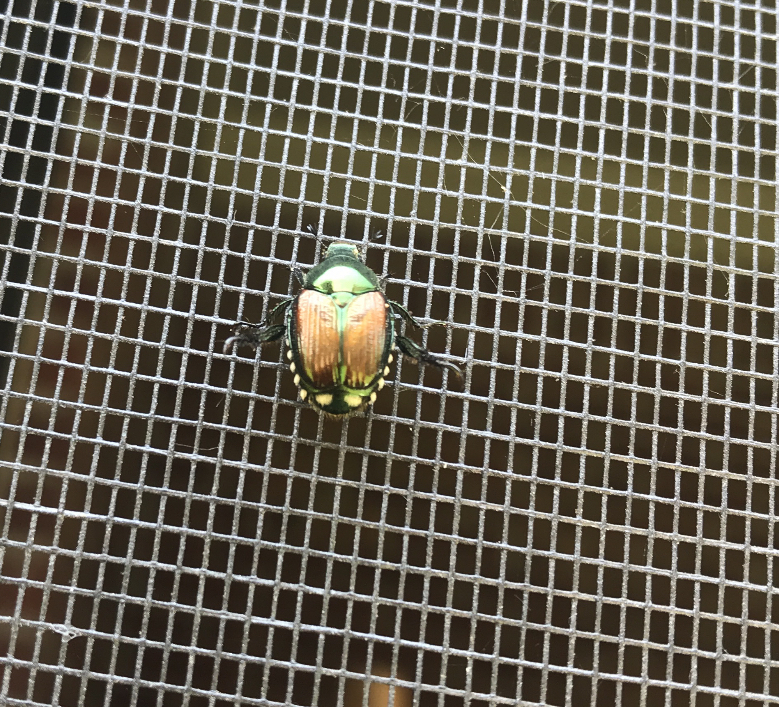 As my last blog, I would like to discuss an arthropod that I was introduced to along my internship journey. With the help of iNaturalist and some additional research, I was able to learn about the beautiful, but destructive Japanese Beetle.

I first noticed the Japanese beetle while taking a stroll through my garden and a green shimmer caught my attention. As I inched closer, I saw one of the most beautiful insects I have ever seen, well at least from a future entomologist’s perspective. I quickly took a picture of this amazing insect and uploaded it to iNaturalist to get identification of what this “bug” was. Within 24 hours, the arthropod was identified, and my research began.

To my surprise, I learned that the Japanese Beetle is an invasive pest that destroys hundred =s of species of plants. They were introduced in the early 1900s from Japan and have been a major garden pest since then. Not only do adult beetles cause issues, but their pupae destroy root systems even before emerging from the ground. The Japanese Beetle is a good example why arthropods are an important study topic. There are many positive effects of arthropods that are well known, but there are just as many negative effects that are not equally acknowledged. By studying the negative effects, such as plant destruction from Japanese Beetles, these effects have the possibility to be controlled.

I am sharing my discovery of this iridescent beetle to illustrate how I have used the tools given to me by the Mosaics in Science internship. Now, I am able to identify sub-phyla of arthropods, use an app based on citizen science, and formulate my own scientific thoughts leading to an experiment. I am very grateful for of the things I have learned from being a biology assistant intern at the Vicksburg National Military Park and I look forward to using this acquired knowledge towards my future career!

I would like to thank the MIS team and my supervisor Chuck Beightol for making this internship happen!