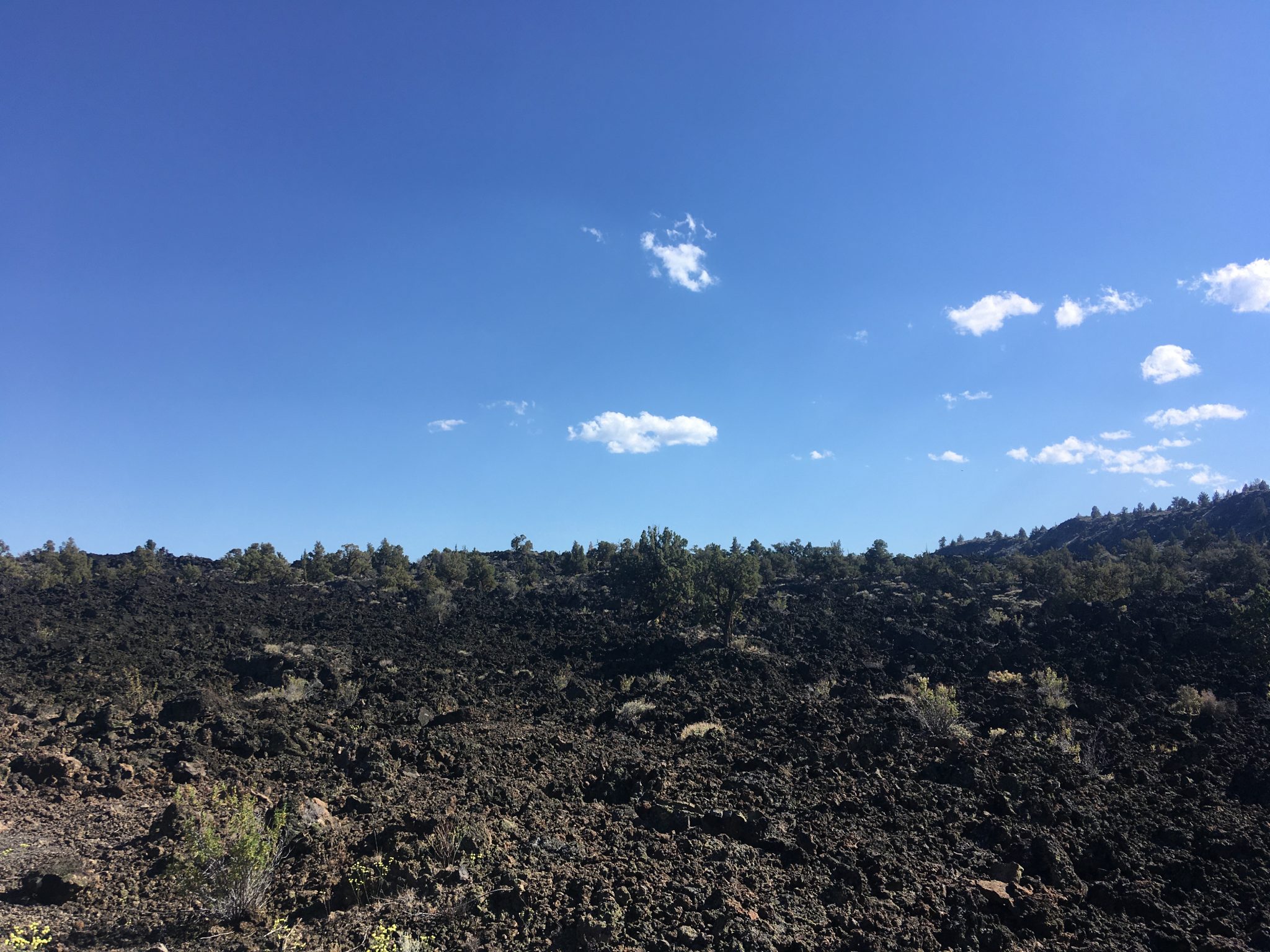 Cover picture: Imagine lava flowing out of a volcanic vent. The lava flow shown in this picture is known as a’a lava. a’a lava is thick, cools down quickly, and loses gas as it loses heat. Those processes form the characteristic rough surface associated with a’a lava flows.This cover picture shows rough a’a lava flow from Fleener Chimneys, a trio of volcanic vents located about a mile away from this location. This lava flow is named “Devils Homestead” and expands about 1.5 – 2 miles north and south of where this picture was taken.

“Do you know the difference between a National Park vs that of a National Monument?” This was one of the first questions that my supervisor asked me, my co-intern, and our team on our first day, and it is admittedly something that I never bothered to think about nor differentiate.

I’ll give you a minute and try to guess what you’re thinking: size? location? protection of specific animals and plants? public opinion? advocacy from groups and organizations?

In addition to the who behind the establishment of both, the why is an important distinguishing element between the two. National Monuments are established to protect areas with specific historical, prehistoric, cultural significance whereas National Parks are preserved primarily for their recreational and scenic value. (This does not mean that National Monuments do not have recreational and scenic values nor does this mean that National Parks do not have historical, prehistoric, and cultural significance!) In the case of Lava Beds, the volcanic features, war sites, and Modoc use areas are the areas and entities being protected by this national monument designation. Many areas are still closed because damage assessments from 2020’s Caldwell Fire are still in the works. (This fire burned about 70% of the park!)

Either way, both help with the conservation and preservation of animals, plants, landscapes, areas with cultural significance, and intrinsic worth of the aforementioned—and also contribute to public enjoyment opportunities. Let this be a reminder that those who pay federal income taxes are those who help to fund the activities of these established areas. And remember, the difference is (primarily) in the name!

Now, I must loop back to the question-title of this blog: “Why is Lava Beds a National Monument and not a National Park?”

The short and sweet answer: under the authority of the Antiquities Act of 1906, President Calvin Coolidge established this monument by executive order on November 12, 1925. If Congress had signed, then this area would be a National Park instead of a National Monument. but remember what I said about how easy it is to get one signature (from the president) vs that of a crowd (Congress)? Again, the establishment and distinction is political.

Prior to the official monument designation, many parties advocated for the protection of Lava Beds and the surrounding area. The Modoc War of 1872-1873 war brought attention to this area, and the roads established for the war efforts (plus the growing presence of automobiles) allowed for an an influx of new travelers. Residents of the area, individuals, and organizations vouched to have this area, its war sites, and caves managed under the federal government. Noteworthy is J.D. Howard. Howard is credited with locating, naming, mapping, and photographing over 100 caves in the park, and is the person who receives much of the credit for advocating monument status for Lava Beds. Fittingly, because of his efforts to preserve this unique place, he is known as “The Father of Lava Beds.”

The U.S. Forest Service, who helped with road building and signage prior to President Coolidge’s order, also played a part in recommending monument status for Lava Beds. After the designation, the Forest Service helped with visitor accessibility to the caves, and had initially managed this land as part of the Modoc National Forest in the beginning but transferred management over to the National Park Service in 1933. Today, the National Park Service currently manages the 46,692 acres that comprise Lava Beds National Monument and its hundreds of caves, volcanic features, Modoc history, and 28,460 acres of wilderness area.

Many people usually stop by here on the way to Crater Lake National Park, and are often surprised by what Lava Beds National Monument has to offer them. For this hot summer, the caves offer refuge and respite from the record-breaking heat we’re once again experiencing this year. Whether you’d find yourself interested in caving, seeing the result of volcanic activity first-hand, intrigued by the indigenous Modoc tribe’s history, trailblazing, or stargazing at the dark night skies here, I hope you consider Lava Beds in your future travels!