Cover picture: This picture captures A LOT of bats, probably hundreds or thousands flying out per second in this one frame. Wanna try counting?

I’ve experienced many moments where I am overwhelmed, humbled, and amazed by sights that make me feel small—moments that put me in my place and remind me that I am just one small human among billions on this earth, one who has the privilege to experience what I do and see. These “moments” have ranged from late night contemplations after watching murder mystery shows as a kid who stayed up past bedtime and got too curious (unbeknownst to my parents unless they’re reading this now), reading National Geographic books about the fauna and flora and environments that exist outside from my immediate home, seeing the vast expanse of Los Angeles city lights from Griffith Observatory, taking in the height of Hoover Dam, stargazing and admiring the Milky Way from Lassen’s Lake Helen, other countless awe-striking moments, and recently… watching hundreds of thousands of bats fly out.

Prior to observing the bat outflight, I stepped out of the group area after setup to admire the surroundings, take in the view of the sky, study the little rattlesnake I accidentally scared while exploring the area for a good sunset view, and stared a little too long at the large cloud of smoke building up in the distance. (I learned later that the smoke cloud is from the Bootleg Fire, and is responsible for the unhealthy and fluctuating air quality that the park has been dealing with for a week and a half now.) I came back to the group area, and not even a second after I finished asking my supervisor, “Which fire is that smoke cloud from?”, bats began to abruptly fly out.

A heavy stream of bats flew out and away. Everyone fell silent and watched. We all heard wings beating for flight and against other bat wings, felt the small gusts of air from bats flying a little too close to us, watched them fly away as a loosely scattered black haze, and saw them disappear and dissipate into the distance. This stream was constant, lessened in bat density over time, and continued on for about an hour. As we watched, we took note of how the wind shifted where the bats flew. My supervisor noted a peregrine falcon swooping in for a bat meal. We kept a lookout for other predators who wanted to find a meal from the bat outflight. We admired the sight, took some pictures and videos for our own enjoyment, and burned the rest of the sight into our memories.

Stargazing afterward made me lose sleep. I had not been able to see that many stars nor the Milky Way in a while, not since camping at Lassen Volcanic National Park and stargazing at Lake Helen and in the Bumpass Hell parking lot. The smoke from other nearby fires (NOT the impending smoke from the growing Bootleg Fire in the distance) cleared up at the right time—the timing almost felt like a movie moment. Those who wanted to watch the bats dive back into their cave had to wake up early, before sunrise. Knowing that the group would be leaving the site early, one would have to compromise some sleep to see the bats fly in.

I woke up early for the inflight anyway. I admittedly stayed in the sleeping bag as long as I possibly could—not because I was sleepy, but because I was cold. What shortly pushed me out of the tent was the sound of bats’ wings cutting through the air (you can hear this in the short clip on right.) It was loud and audible from the camp area because of the number of bats flying back in all at once!

We had the option to sleep in, but I wasn’t the only one who was up. Our interim superintendent and her husband got up earlier to watch, one of the park rangers joined in shortly after I did, and my supervisor came by to catch the tail end of the bats flying in. The slight lack of sleep was well worth the experience of stargazing and watching the bats. 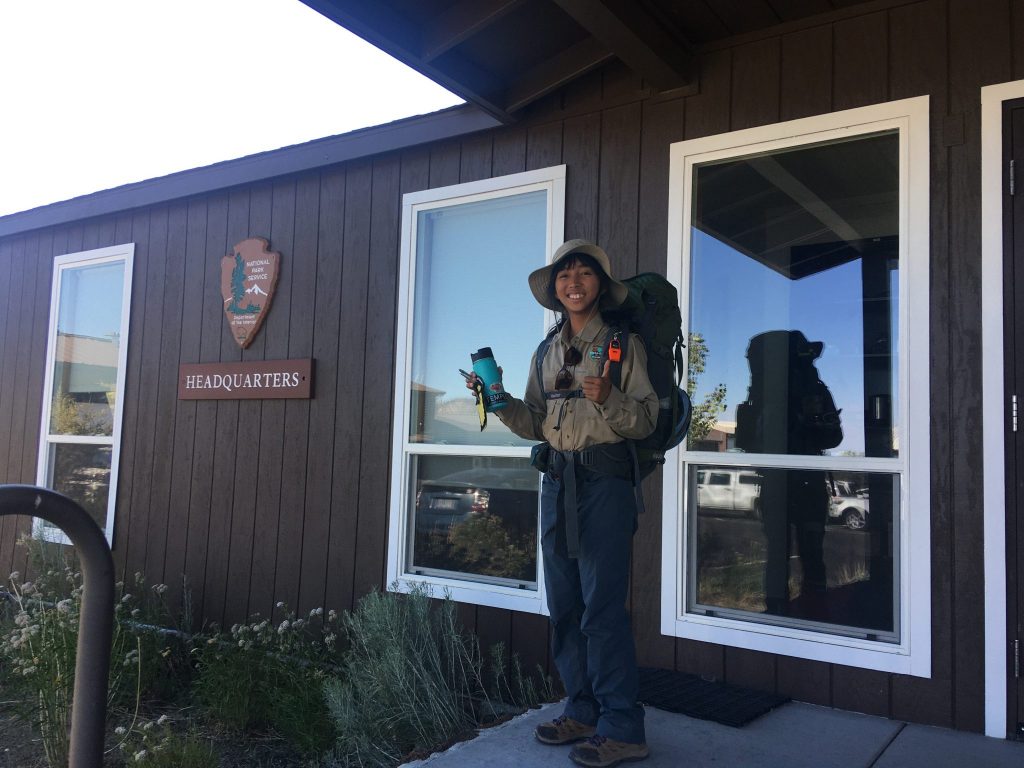 To watch this bat outflight, our group was required to be in good physical condition and be able to carry all of their camping gear, essentials, and additional research gear for an overnight stay (aka “backpacking”) in the late afternoon heat. Prior to this trip, the only things I knew about backpacking is that 1) you must pack light, and 2) buying the gear is a big upfront cost. My first backpacking experience was was made possible by the spacious backpack that work provided and the very light and compact sleeping bag that my co-intern let me borrow. Car camping is more than enough to make me happy, but if time, money, and company allow it then I’d be interested in backpacking more!