going out with the Kayak Kids 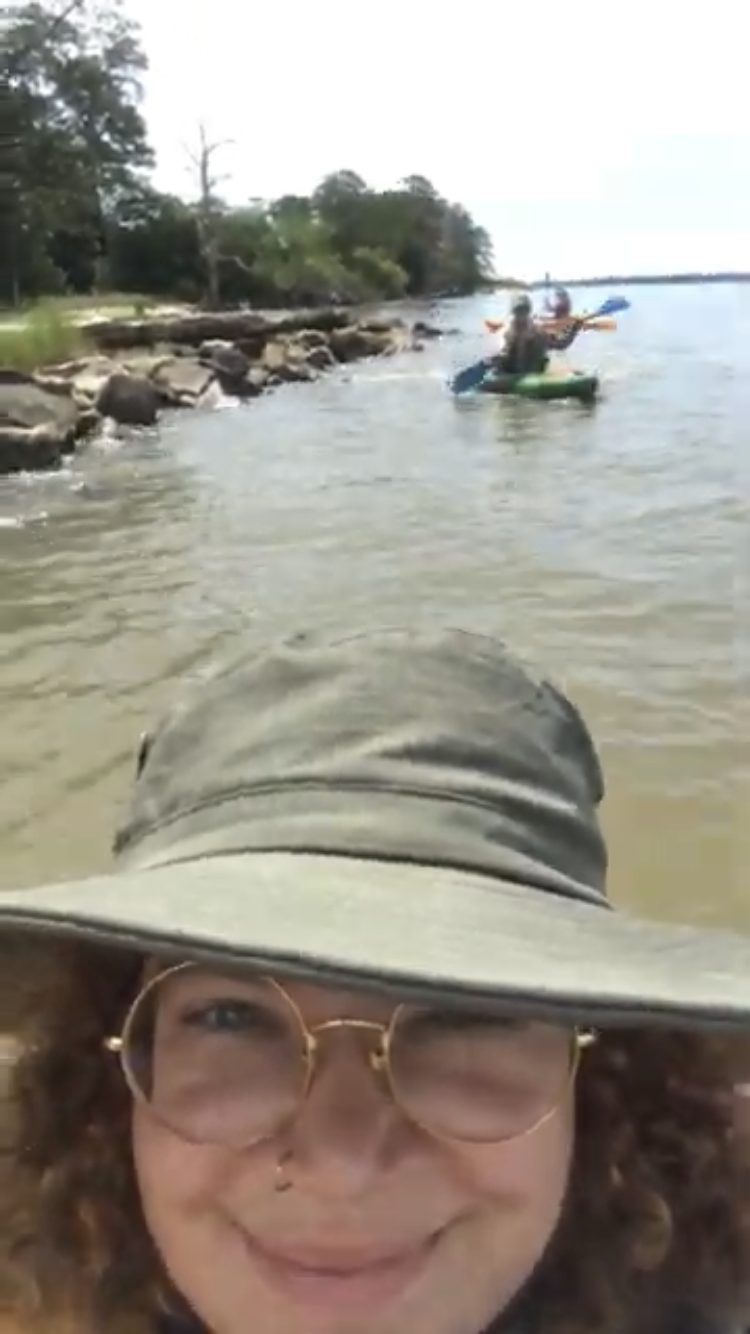 09 Jul going out with the Kayak Kids

Two weeks ago, five fellow NPS employees and I set out on a kayaking expedition to collect some soil samples on the Southern side of Jamestown Island, which is only accessible by water. Due to the levels of kayaking experience, as well as the low tide and meandering streams that could lead to our points, we decided to go around the entire island, as this would prove to be easier and safer! Our kayaking journey of 4.64 miles can be seen on the map above!

This was my second experience kayaking, and my first time in a single person kayak. I quickly found that I loved kayaking! I loved the feeling of being out on the water, the sun making the waves glitter as they carried us downstream on a current. We saw gorgeous herons wading nearby, fish jumping in and out of the water nearby, and even some bald eagles in their nest on the shore! This was by far my favorite soil sampling site, especially with the lack of ticks we encountered.

The sites themselves did not take long, and the majority of our traverse was getting to and from the small beaches we landed on, and getting through the thick brush and marshes. There was a lot more marshland than anticipated, as the last people to map out these areas had not reported as much marsh as we had encountered – most likely these marshes have been creeping in as sea level rises. Sadly, a site was unreachable due to the marsh encroachment, and many of the original site coordinates had to be adjusted as well.

Despite this slight setback, we trekked on! I had three fellow interns who joined me, as well as two seasonal NPS employees. Only one of the interns had a science background, and had helped me in the field with soil samples before, and the other four who accompanied me are focused on interpretation for CAJO (Captain John Smith Chesapeake National Historic Trail). However, I enjoyed everyone’s company, and everyone played a role in the day’s smooth sailing (pun intended). I appreciate the time taken out of their days to join me, and I am so thankful for the fun we shared!

We were in a bit of a time crunch on the way back, as there was a thunderstorm headed our way that afternoon. On our way there it had taken less than an hour, and I was expecting the same easy kayak back. Unfortunately, we did not take into account the current that fought against us! The trip back took us an hour and a half, and a lot of upper body strength. Nevertheless we made it, beat the storm, and had a lovely morning out on the water! My experience with my coworkers and field work has been nothing short of spectacular.