Queen of the night 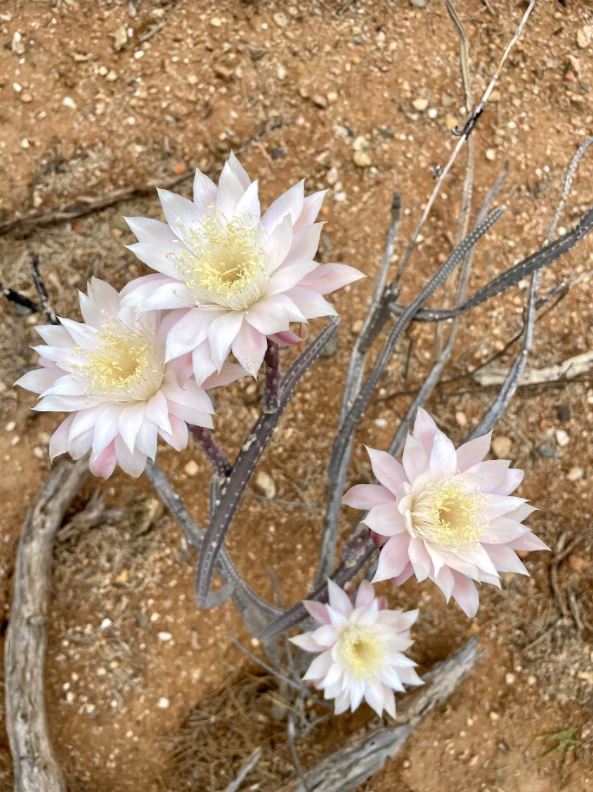 06 Jul Queen of the night

Monsoon season has officially started here in the desert and plants are starting to bloom! We have been getting cooler temperatures and cloudy days with some precipitation, which is an ideal weather for plant reproduction. Today’s blog will be dedicated to one plant species in particular: the night-blooming cereus Peniocereus greggii also called “Queen of the Night”. This rare and inconspicuous cactus produces a large and beautiful white/light pink flower (it has nice smell too!) that only blooms at night (most commonly in one night). The flowers will start to close in the morning, unless it is a little bit cloudy there’s a high chance that you can appreciate them in the late morning. Some of their pollinators include but not limited to: honeybees, native bees, and hawk moths. Their populations are small and scattered throughout southern Arizona, Sonora and Baja California, Mexico.

These plants have been found over the years in the east and west districts of Saguaro National Park, but they haven’t been extensively studied in its natural habitat. Ongoing weekly tracking of buds, flowers, and fruits, surveys for new individuals and aboveground measurements are occurring at the park in hope to know more about its long-term conservation.  I’ve personally never seen this plant before so at the beginning of the surveys it was very difficult for me to see them. They camouflage very well under nurse plants such as creosote bushes, ironwood, and honey mesquite. The buds can be very small at the beginning of their flowering process, but then they become large and elongated and that’s when you know they’ll bloom soon. It’s surprising how fast they can grow and this week we were lucky to see some of their beautiful flowers. Just the same week monsoon season started! It is also surprising how plants are adapted to this climate and know exactly when it’s the best time to reproduce. Their reproduction seems to be influenced by climatic factors, which is why it is so important to study them in this warming climate and how will they respond to temperature and precipitation changes.