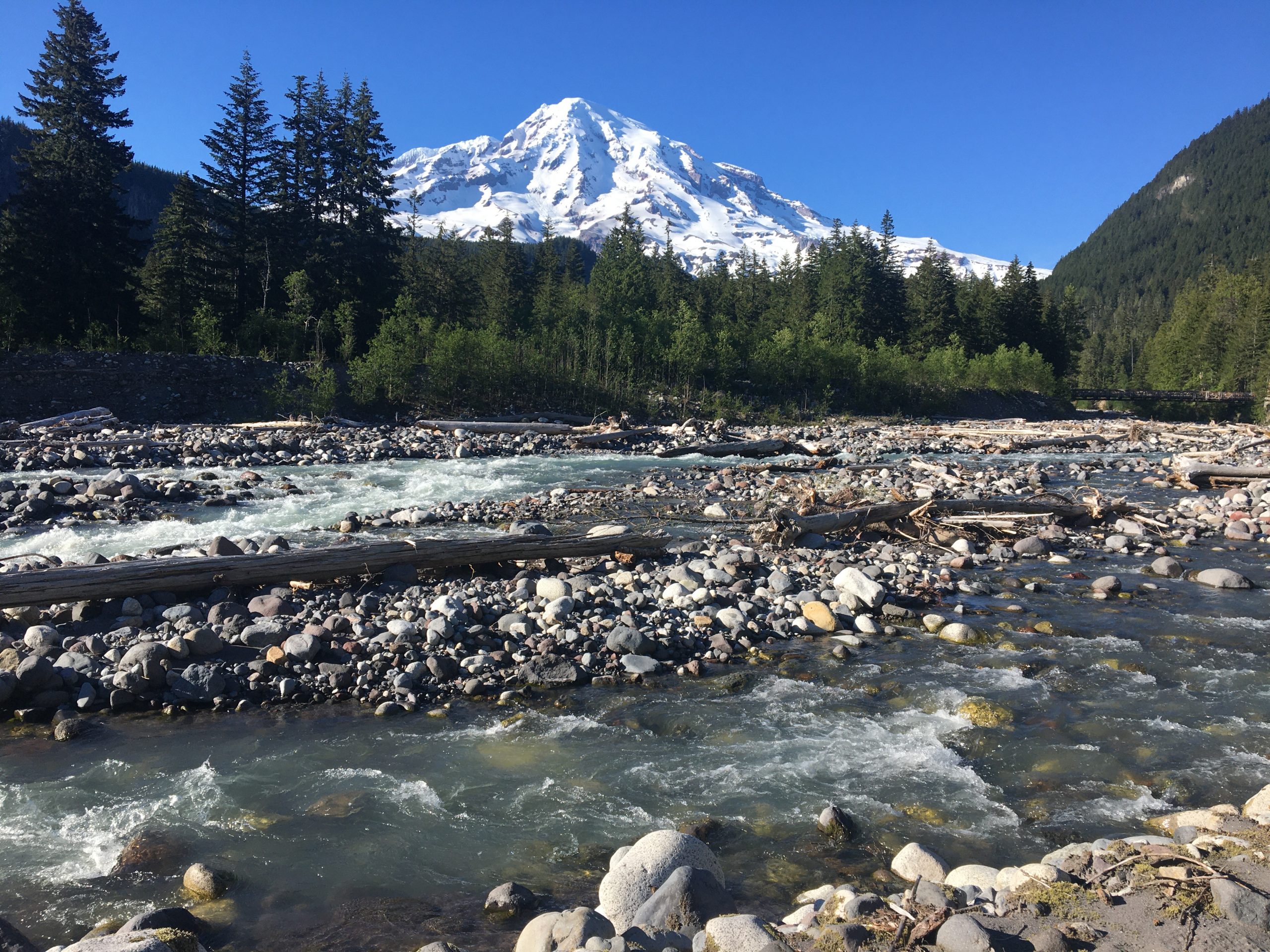 Three weeks ago, I set off on a grand adventure, driving from my home in NYC across the country to Mount Rainier National Park in Washington. I’d given myself around 7 days to do the drive, which meant that most of my day was spent behind the wheel. Luckily, however, I was pleasantly surprised at the amount of nature skulking around the margins of route I-80. From Woodhouse’s toads to a magnificent Great Gray Owl, wildlife encounters kept my spirits up as I gradually traveled West, leaving eastern cities behind as I entered the land of mountains.

Upon arriving at Mount Rainier, I was excited to learn that one of my housemates and co-workers, Cory, was a Mosaics in Science alumnus! He immediately went out of his way to make sure I was settled into the beautiful wooden cabin that was to be my home for the next few months, and gave me a grand tour of Longmire, the park neighborhood in which I’d be living.

When my first workday rolled around, my internship adventure began! On Monday morning, I meant Steven, one of the wildlife crew leads at Mount Rainier National Park and my supervisor. He quickly explained the plan for my first week: a camping adventure to nearby Olympic National Park. After outfitting myself with a kit of gear, we hit the road. Our task for the day was to travel to the Olympic National Park Staircase Ranger Station and meet up with Michael, another Mount Rainier National Park wildlife crew lead, for some bat sampling. A colony of Yuma myotis bats was roosting nearby, and we were hoping to capture some bats in order to test them for White-nose syndrome. This contagious fungal disease has been spreading across North America, and our goal was to swab multiple bats in order to test if the fungus was currently affecting this colony. To this end, Michael and Steven garbed themselves in protective safety gear and demonstrated how to use a “modified slide trap”. This simple device, made of a pillowcase, plastic sheet, and duct tape, allowed a roosting bunch of bats to be safely surrounded and gently funneled into a bag that allowed us to process them. As I had never gotten a rabies shot, I wasn’t able to handle any of the bats. But my job as scribe was quite exciting enough! As Steven and Michael gently swabbed their bats and took body measurements, I carefully noted everything down on a data sheet. After processing 60 bats (and safely releasing all of them) we packed up for the night. Although we saw no clear visual signs of White-nose, we’ll have to wait for the swabs to be tested before definitively knowing whether some of the bats were infected. As a final very important step of the process, we disinfected all of our gear, ourselves, and anything that was near the bats to make sure we didn’t accidentally spread White-nose between colonies.

On Tuesday, we rolled out of our camping gear and hit the road, driving to the Ho rainforest on the other side of Olympic National Park for more bat sampling. Along the way, we stopped at the Elwa River to exchange batteries on an autonomous bat detector, meant to detect and record bat vocalizations in the area. The detector was located at the former site of the Elwa Dam, which was removed in 2011. Today, the river has regained its natural course, while vegetation is recolonizing what was once the bottom of a reservoir. It was a truly inspiring experience to be able to observe how resilient nature can be if given a chance. Seeing my first sun in Washington state made the moment even better!

That night, the wildlife crew was able to sample another population of Yuma myotis at the Ho rainforest. I enjoyed getting a chance to observe bats for the last time this week, as on Wednesday I’d be switching gears and joining a vegetation team!

Wednesday morning rolled around, and Steven and I headed out to meet Mahika, Mount Rainier National Park’s other Mosaics in Science intern who is focusing on plant work this summer. My plan was to join her and one of her supervisors, John, an ecologist from the North Coast and Cascades Inventory & Monitoring Network, for some old growth tree monitoring along the Queets River. John was interested in exploring some historical tree plots to see whether last year’s Pacific Northwest heatwave negatively impacted local trees. Steven and I ended up arriving at the meeting point a bit early, giving us the chance to briefly explore a local beach. From porpoise bones and anemone-filled tidepools, to spawning Surf Smelt and a flock of feasting Bald Eagles, I had a blast exploring an ecosystem entirely different from the mature forest we’d been working in during the past few days.

Soon after, I joined Mahika and John, while Steven headed back to Mount Rainier National Park. It was time to see some trees! The plots we were heading for were located off-trail and required bushwhacking. After a safety talk, we practiced our compass skills carefully. It was a little ominous to realize how quickly we all lost our sense of direction in the dense Queets River forest, and we were glad to have compasses and GPS units. Navigating the plots was challenging, with wet plants, large spiderwebs, and slippery logs requiring plenty of concentration. However, we continually were reminded of how lucky we were to work in such a special environment. From a fat Western toad squatting in a puddle, to ferns approaching head height, I felt like we had entered another world.

By evening, the damp weather had given way to rain, so we set up our tents in a hurry and retreated to a sheltered spot near the campground bathrooms to cook dinner. While not the most scenic location, it was snug and dry, and our long and exciting day made our simple camping food taste amazing.

Thursday was time for another vegetation plot! This time we had to hike and bushwhack a fairly long distance to get to the plot. Luckily, the rain had slackened during the night, so we were able to shed our raingear and scrabble our way up the side of a hill. Along the way we even found two shed Roosevelt elk antlers! After struggling to hold them aloft for more than a few seconds, I can’t imagine how bull elk are able to navigate the dense and steep forests of Olympic National Park with two of them on their heads! Leaving the antlers, we continued on, eventually reaching our plot. Although we found a few trees that seemed to be damaged from last year’s heat wave, the forest as a whole seemed to be doing fairly well. It was encouraging to see how tough these massive trees were and still are!

By Friday, we were all a bit tired and decided to stay on the trail while we hiked around looking for any other signs of heat damage. Unfortunately, we saw more damaged trees near a part of the trail that crested a ridge. John pointed out that many of these trees were the same species: Western hemlocks. While we couldn’t tell for sure if their damage was heat-related, it was saddening to see multiple giants displaying browned and dead branches. There was a ray of hope, however. Many of the damaged trees were still alive and seemed to have some signs of new growth. It appears likely that many of them will be able to recover, given enough time. After our wonderful river hike, it was time for Mahika and I to journey back to Mount Rainier. What an exciting five days! Between learning so much, exploring so many new places, and meeting countless new faces, it was hard to believe that I’d only been in Washington for a week. See ya next time!