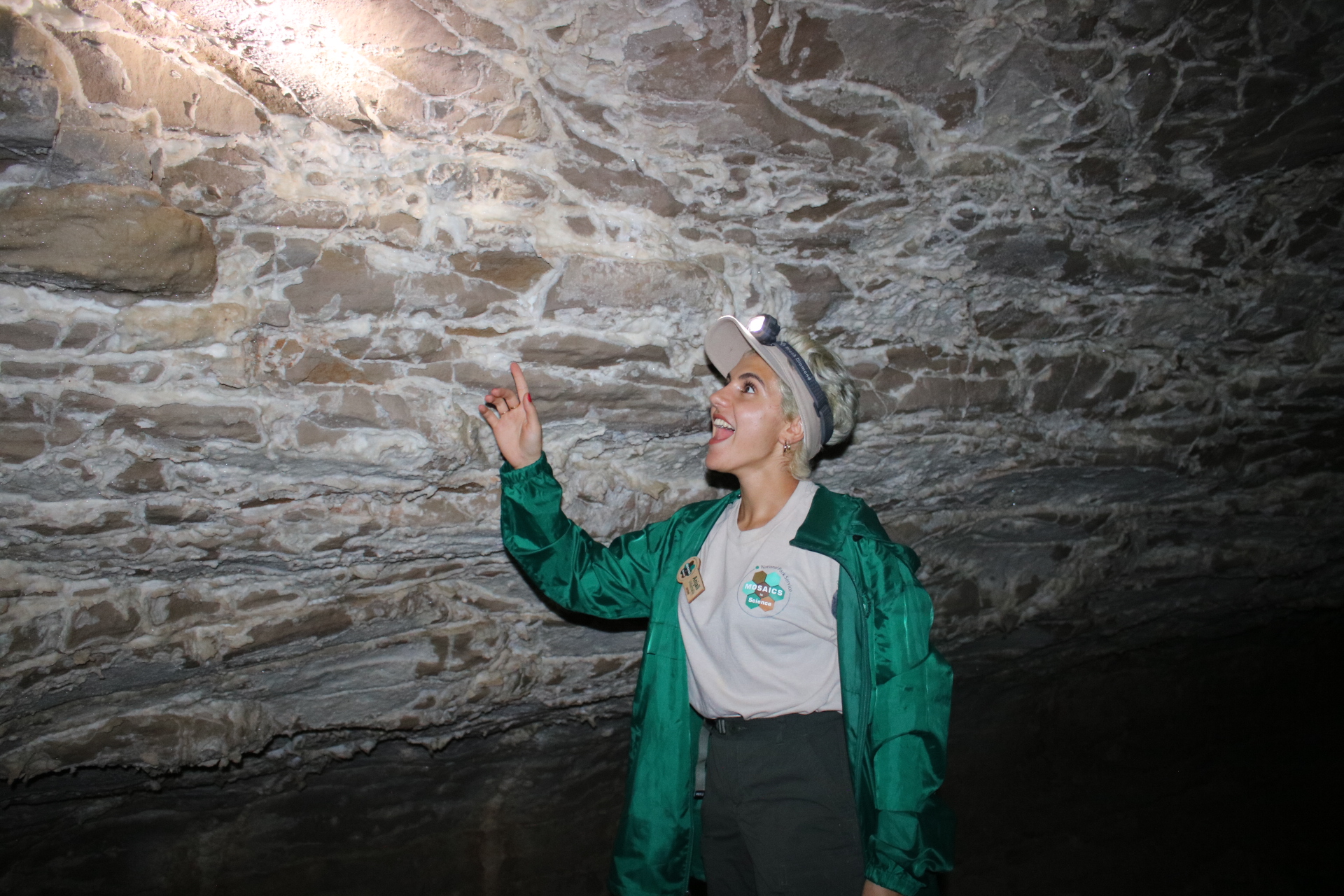 Posted at 09:27h in Uncategorized by Anjali Velamala 0 Comments
1 Like

We all have faults, and so does Mammoth Cave (one of mine is using too many puns).

Mammoth Cave is the longest known cave system in the world, currently at 420 miles, with much more to be explored and mapped. It is a geologic wonder. The caves are carved from limestone rock that was deposited 539-251 million years ago when most of the United States was covered in a shallow tropical ocean. The calcium from the shells of invertebrates of the time was broken down and deposited at the bottom of this ocean; this is one reason why there are so many fossils in certain layers of Mammoth Cave. Over time, the calcium deposited was cemented into limestone, and as the ocean slowly receded, the sand from the beaches turned into sandstone. Then, plat tectonics caused some of the limestone to jut out of the earth more than the rest, making this sandstone erode first, revealing the easily dissolvable limestone underneath.

As water goes through the atmosphere as rain, the water becomes slightly carbonated because of how much carbon dioxide it comes in contact with. This carbonation is just enough to make dissolving limestone easier. So when the rain poured on the land of Kentucky, it had nowhere to go but down. It carved out what is known as a karst landscape, “a type of landscape where the dissolving of bedrock has created sinkholes, sinking streams, caves, springs, and other characteristic features” (definition from NPS.gov). Over many years, the water coming from the rain dissolved more and more limestone creating the caves. As they got deeper and deeper, the upper parts of the cave below insoluble sandstone cap rock became drier as the water did not need to pass through there anymore. Gypsum and other minerals and crystal structures started growing in these parts of the cave. (In the first image, Anjali points to some gypsum forming in the cracks of Great Onyx cave.) The upper layers of the caves that were not covered with the insoluble cap rock had water slowly drip down the walls. This water deposited some of the limestone dissolved within it and created the beautiful limestone formations we see in the cave. I learned all of this information from scientists and guides at Mammoth Cave and A Geological Guide to Mammoth Cave National Park by Arthur N. Palmer.

I have been involved in researching the way the water moves in the cave system. The research team I worked with is from Western Kentucky University; they are working on outlining the water basin of the Great Onyx Cave system, which is currently not connected to the larger Mammoth Cave system. A water basin is the area of land where water flows to the same places (like a river of a bay). We are working on delineating our basin by using dye tracing.

Our first step is to pour highly concentrated dye into a sinkhole. We found our sinkhole by finding a lower bowl-shaped part of land with a good sinking rate. We have to wear gloves and booties when pouring dye because we do not want to cross-contaminate sites — the dye should only be found in one place; if we accidentally move some to another area then we may have incorrect results. We also pour some water in with the dye so that it easily flows into the cave and through the water path it would normally take.

We already had dye bugs installed before our initial pour so that it would catch the dye as it passed through the cave and out into the river through springs. A dye bug is a little packet of activated charcoal — the dye sticks onto it and we process it in the lab to see what dyes are in it. We have dye bugs at streams in the cave as well as springs on the river (a spring is where water comes out of the cave; they don’t necessarily have to come out to the river).

The caves are still forming at the same rate they have always been and that is really amazing to me; it has taken millions of years for them to form and I’m happy to be a part of researching and conserving them!

Don’t take this post for granite, come back for more! Thanks for reading!