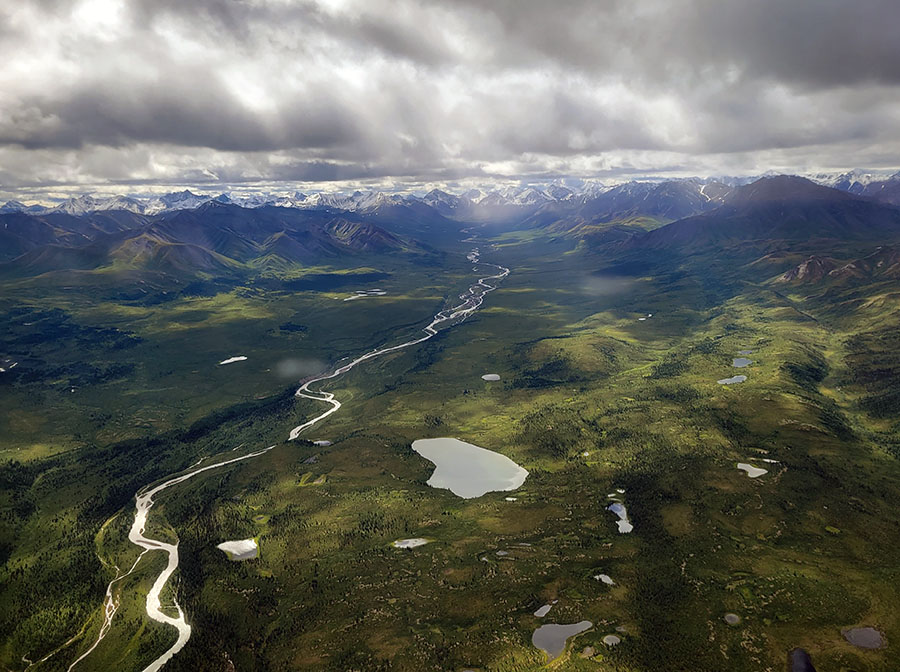 Denali National Park has its own fixed-wing plane and pilot Justin Wiseman. My supervisor, Geographic Information Systems Specialist Britta Schroeder planned a Structure from Motion flight over the park road. Structure from motion (SfM) is the process of estimating the 3-D structure of a scene from a set of 2-D images. I helped set up the cameras for the flight. It was interesting to see firsthand how much work goes into taking large datasets of aerial photographs. Once all of the equipment was ready we took off!

I was nervous to be in such a small plane but after a few minutes my heart stopped racing and I was able to enjoy the spectacular views. We flew over the Pretty Rocks landslide and it was even more impressive to see from the sky.

The weather was great for most of the flight, but we did fly into some rain and snow. Thankfully, the precipitation did not get onto the camera lenses!

We flew over the whole park road so I was able to see many famous Denali landmarks that I would not have been able to see otherwise due to the road closure. Wonder Lake was gorgeous; I loved being able to see the same areas as the historic aerial images that I worked with for my project.

Thank you so much Britta for letting me join you on the flight!

This was my last week in Denali; I could not believe that time went by so quickly. On my last day in the park, I went to the Sled Dog Kennel to meet the puppies.

This year’s litter was born on June 18, 2022, and in honor of the centennial, they were named after the first dogs that patrolled the park in 1922: Bos’n, Skipper, Mike, Dynamite, and Rowdy..

See the puppies for yourself on Denali’s Puppy Cam: