Micro-Safari Adventures from the Mountain 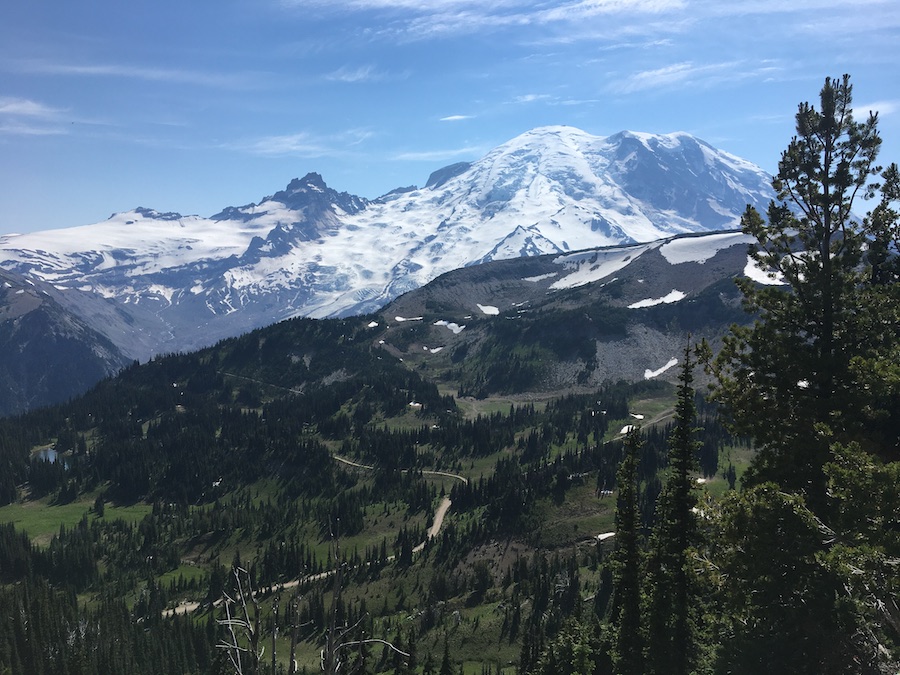 16 Aug Micro-Safari Adventures from the Mountain

This summer, the majority of my work at Mount Rainier National Park involves either Northern spotted owls or native Cascade carnivores. This work has been incredibly exciting and has taken me all around the mountain and beyond. One of the best parts about fieldwork, though, is how many other research opportunities you get to take part in! Everyone I’ve met at Rainier is an expert in something. Whether skilled at reading avalanche conditions or adept at determining pine tree bud formation, the people around me are constantly opening my eyes to the beauty and diversity of the natural world. For this reason, although I’m dying to write about Spotted owls and carnivores, I thought I should devote this blog post to some smaller subjects I’ve learned more about through the help of others.

While owls and mesocarnivores are wonderfully fascinating, they’re really hard to see! I haven’t yet been fortunate enough to find anything more than owl feathers or wolverine hair. Some of the other denizens of the forest, however, are a bit more obvious! One example are the butterflies. From alpine meadows to moist woodlands, there are butterflies of all shapes and sizes at Mount Rainier National Park. Although I’m by no means a lepidopterist, I was able to go out on a short butterfly expedition the other day to see who was living near a certain marsh. I’d never before realized how hard it is to get a picture of a butterfly! It seems as though they almost never stop moving. In the end, I got lucky and managed to find a puddling group of butterflies and saw my first ever Indra swallowtail! In addition, I got watch a beautiful Anise swallowtail feeding on flowers.

A few weeks ago, I got the special chance to join a carnivore researcher as she checked on several wolverine camera trap stations. After finishing up our work for the day, we decided to take a slightly longer hike back to the car. How come? Well, there was a marsh not far from where we were, and few things are cooler to nature nerds than a nice boggy swamp! We weren’t disappointed as we broke through the last band of trees and found ourselves gazing down into a crystal clear pond surrounded by boggy grass. A trio of Spotted sandpipers flushed from the water’s edge, filling the air with warbling kew-kew-kew-peep-peep music. Almost immediately we began noticing frogs. A lot of frogs. From babies the size of a fingernail to hefty individuals that could easily jump a foot, the ground was alive with frogs. Our tiredness immediately left us as we dropped our bags, pulled off our shoes, and waded into the marsh.

After catching several individuals, we determined that as far as we could tell, they were all the same species: the Cascade frog (Rana cascadae). Interestingly, it seemed like all the frogs in this marsh chose to lay their eggs in one pile. As we squatted next to the massive mound of gooey, gelatinous eggs, we could see the minute black embryos twitching every so often. A nearby grunting soon disturbed us from the eggs, and we noticed splashing in the shallow pond. Wading over, we were amazed and excited to see a large aggregation of breeding Western toads (Anaxyrus boreas). Several lucky males had already found mates, but the rest eagerly pursued the few remaining females around the pond.

The toads were so focused on breeding that they would swim within inches of our legs! We could see thousands of toad eggs on the bottom of the pond. Unlike the frog eggs, which were laid in blobs, the toad eggs took the shape of a thin rope, one egg following another. We stayed and observed the frogs and toads (including one confused male frog trying to mount a male toad five times his size) for a while before heading home.

All this talk of amphibians in ponds has now got me thinking about some of the entirely aquatic denizens of the park: the fish! Here at Mount Rainier, we have eight native fish species. However, there are also several introduced species, ranging from sculpins (a type of small, goby-like fish) to land-locked Sockeye salmon. Personally, my favorite fish in the park are the trout. Supremely adapted for life in the frigid glacially-fed waters of the mountain, trout are stunningly beatiful and difficult to see. Unfortunately, many of the trout at Mount Rainier were historically stocked and are non-native. These trout were stocked in many waterbodies that never had native fish, harming local amphibian populations. Elsewhere, these trout have invaded streams and competed with native fish populations. For this reason, Mount Rainier’s Aquatics team works on many fish removal initiatives to try and mitigate the harm these non-native fish have on the ecosystem. Luckily for the environment, anyone can help with fish removal! Although not as efficient as some other forms of removal, angling allows biologists (and visitors) to selectively remove only certain types of fish from a waterbody.

I’m realizing now that I’ve forgotten to mention the chubby marmots waddling through the meadows, the pikas bounding over boulders, the elk trotting across the roads, the sapsuckers drilling holes in trees, or the booming grouse I still haven’t been able to see. Oh well, maybe you’ll hear more about them in my next blog. Until then, get outside and spend some time with the smaller wildlife around you. I guarantee you won’t be disappointed!