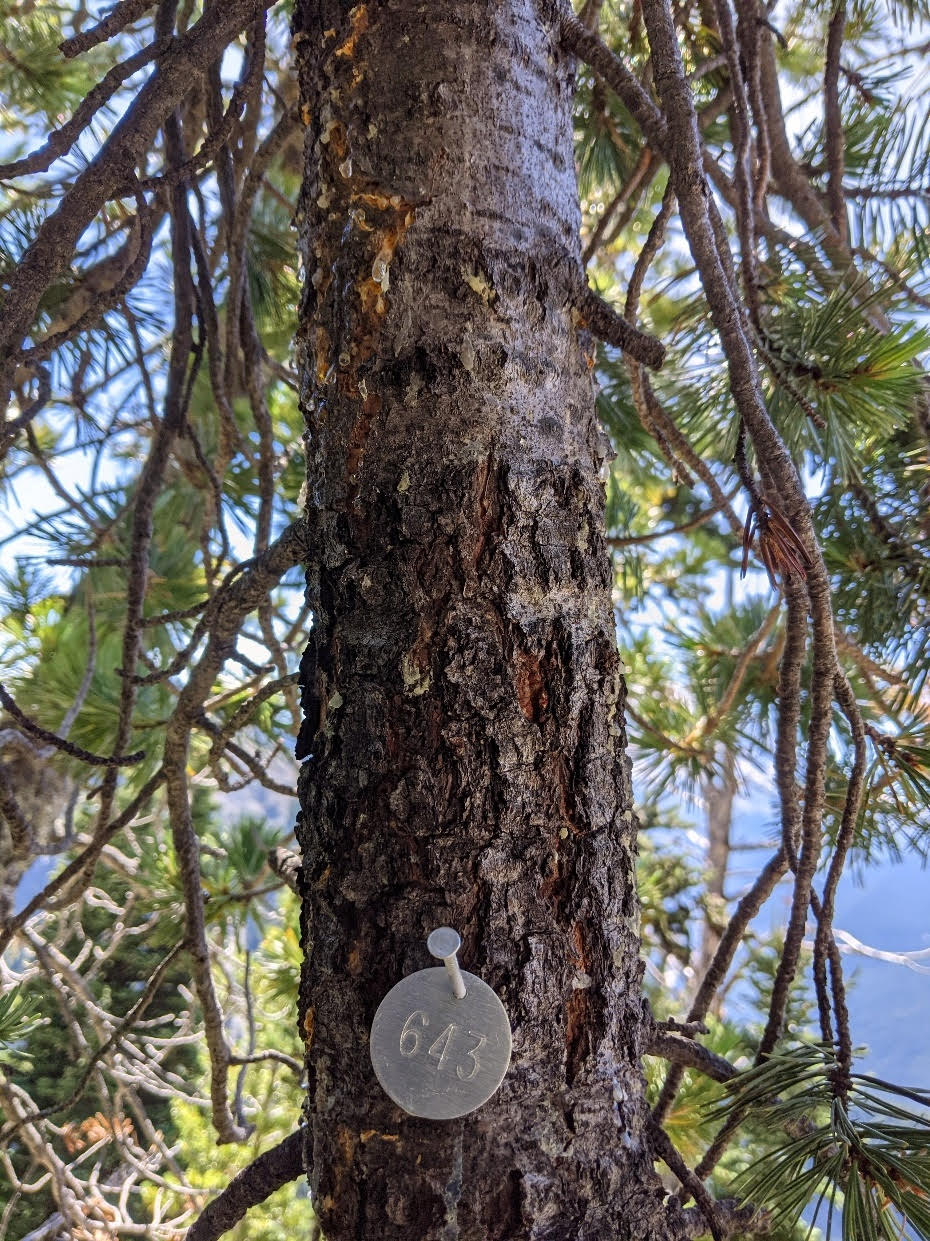 Mount Rainier is ringed by fields and meadows of subalpine ecosystems. The stark outline of the glaciers and ancient lava flows are an incredible contrast to the mass of color and life that, somewhat surprisingly, thrives at 6,000 feet. In late summer, even after a longer and more-frustrating-than-usual snowmelt, the soil comes alive, and – though this is when the park is at its most crowded – it seems like such a delicate confluence of circumstances that let these things grow together.

One such species that grows slow and crooked and deliberately in this ecosystem is the whitebark pine. Pinus albicaulis is a five-needle pine that can withstand the weight and stress of long stretches covered in snow. For a few short months, though, they poke their heads up, put out vibrant new growth, and during masting years produce huge numbers of nutrient-rich cones. They are relatively easy to identify in their environment because they are fluffy and round from a distance – not pointy and spired like their neighboring subalpine firs (Abies lasiocarpa).

Whitebark pines are a keystone species, which means many other creatures in this harsh ecosystem depend on them. Most noticeable are the Clark’s nutcrackers, grey/black/white corvids that get quite cranky when you spend too long at one of their favorite trees. These loud but lovable birds rely on the whitebark cones for food throughout the winter – they fill the pouches in their mounts with cones and bury them to find later. When they inevitably leave some behind, a clump of whitebark seedlings appears. The cones also provide fatty and nutritious sustenance for bears and squirrels. Beyond a food source, whitebarks help with erosion control on steep slopes, as well as snowmelt control as water filters through their branches to the ground plants below.

However, whitebark pines are currently threatened from many different angles at the park. Scientists from the North Coast and Cascades Network (NCCN) have been studying the impact and spread of white pine blister rust, a fungal pathogen that has killed about half of Mount Rainier’s population. Requiring an alternate host in lowland berry leaves (of the Ribes genus) and then moving into pine trees, the fungus is most easily identifiable when it is sporulating: Puffy orange reproducing bodies seem to explode out of the branches. It’s pretty gnarly, but very cool to find hidden in the dense branches of a twisted tree.

White pine blister rust is an invasive fungus, which is why it is causing such devastation across the western US. Native pathogens have coevolved with the native trees, so exist at a stable level with hosts that can fight them off. Invasives come into a population with no evolved resistance or defense and wipe them out. Climate change could also be making pathogens like rust more widespread, as fungi can reproduce quickly and adapt to warming temperatures – unlike the long-lived pines. Blister rust has wreaked havoc at Rainier, but thankfully, NCCN researchers along with the forest service are searching for trees around the park that happen to have some form of resistance, to bring back the population. We spent a day relocating many trees designated as potential sources of resistant seeds, making sure they hadn’t contracted the rust. So far, so good!

A few weeks ago, forest health specialists from the forest service visited us at Mount Rainier and were able to explain their secrets to identifying and treating pathogens like blister rust. Watching them work, they were clearly accustomed to sticking their fingers under bark and their hands in rotting stumps and their heads in tangled branches. I had never studied forest pathology deeply, but their detective work, putting together the visual clues to tell a story of a tree’s life, was addicting. As I explore the trails of Mount Rainier on my days off, I notice the beetle galleries of a wood borer on a bit of bark, a conch on the trunk of a tree that isn’t dead yet but will be soon. The curiosity, much like a fungal pathogen, is contagious.